Examine the ways in which feminism has contributed

Examine the ways In which femlnlsm has contributed to our understanding of families Feminists take critical views of the family as they argue it oppresses women and therefore creates issues such as unequal divisions of domestic labour and domestic violence against women. Feminists believe that there is a triple burden’ of paid work. domestic labour and emotional work. Also gender Inequality Is not regarded as natural or Inevitable, but something that has been created by society. Feminists also argue that the oppression of women is due to patriarchy.

Don't use plagiarized sources. Get your custom essay on
“ Examine the ways in which feminism has contributed ”
Get custom paper
NEW! smart matching with writer

The New Right has been criticised by feminists such as Ann Oakley (1997) as it has a conservative and anti-feminist perspective on the family. The New Right is firmly opposed to family diversity. The New Right sees the nuclear family as the ‘natural’ family and Is based upon fundamental biological differences between men and women. In their view, the nuclear family has clear-cut divisions of labour between the breadwinner-husband and homemaker-wife. Therefore leading to criticisms from feminists.

Ann Oakley argues that the New Right wrongly assumes that husbands and wives’ roles are fixed by biology.

She also believes that the New Right view of the family is a negative reaction against the feminist campaign for women’s equality. Even more so, other feminists argue that the traditional nuclear family favoured by the New Right Is based on the patriarchal oppression of women and Is a fundamental cause of gender inequality. In this view, it prevents women working and keeps them financially dependent on me.

Feminism is often referred to as feminisms’ as it is acknowledge that the feminist label Is broad and a cover many types of feminist.

The main types of feminists are; Liberal, Marxist, Radical and Dfference. Liberal feminists such as Jenny Somerville (2000) believe that the main obstacle for women is the equality in attitudes, practices and law in which can be changed without any fundamental changes to the structure of society. They also are concerned with campaigning against sex discrimination and for equal rights and opportunities. Through people favouring and challenging the gender role soclallsatlon In childhood, attitudes can then be changed towards roles In the family.

Liberal feminists argue that women’s oppression is gradually being overcome hrough the changing attitudes and changes in laws such as the Sex Discrimination Act (1975) which outlaws discrimination in employment. Even more so Liberal feminists hold a similar view to theorists such as Young and Willmott, although they do not believe full gender equality has been achieved in the family, they argue It has been a gradual progress. Through the gradual progress of changing attitudes, the ways In wnlcn cn110ren are soclallsea In tne Tamlly Is now OITTerent.

Daugnters are socialised more equally to sons in the modern day compared to the past. However, ther feminists such as Marxist and Radical, criticise Liberal feminists for failing to challenge the underlying causes of women’s oppression and for believing that changes in law or attitudes will be enough to bring equality. Marxist feminists and Radical feminists believe instead that far-reaching revolutionary changes to deep- root social structures are needed. Another type of feminist is Marxist feminism, and they argue that the main cause of women’s oppression in the family is not men, but capitalism.

Several functions are performed through women’s oppression for capitalism, firstly that women reproduce he labour force, through their unpaid domestic labour and by socialising the next generation of workers and maintain the servicing of the current generation. Another function is that women absorb anger that would otherwise be directed at capitalism. Wives are describe as takers of shit’ by Fran Ansley (1972) who acknowledges that women soak up the frustration of their husbands feelings due to the alienation and exploitation they suffer at work. This is a primary example for Marxists, as it explains male domestic violence against women.

Abbot and Wallace (1990) note that the main ause of domestic violence is the male perception that the partner is failing her duties. Dobash and Dobash (1979) also found that these duties tended to be about sex, money and home making. Due to the male perception of the partner failing her duties, it is often resulted in the women believing that they deserved to be beaten. Also women are a ‘reserve army of cheap labour, meaning that when extra workers are needed women shall be taken on to work, but as soon as they are no longer needed the employers ‘let them go’ to return to their primary role as unpaid domestic labour.

Men benefit form women’s domestic labour and from their sexual services, and they dominate women through domestic and sexual violence or the threat of it. Radical feminists argue that the family is the root of women’s oppression, so therefore must be abolished. They also argue that the only way to achieve this is through separatism, where women must live independently of men. Even more so, radical feminists argue for ‘political lesbianism’, which is the idea that heterosexual relationships are inevitably oppressive because they involve ‘sleeping with the enemy.

Germaine Greer (2000) argues for the creation of all-female or ‘matrilocal’ households as an alternative to the heterosexual family. However, for liberal feminists such as Jenny Somerville (2000), radical feminists fail to recognise that women’s position has improved considerably with better access to Jobs, divorce and control over tnelr own Tertlll ty Somerville also argues tnat separatlsm Is unlikely to work as heterosexual attraction makes it unlikely that the conventional nuclear family will disappear. On the other hand, Somerville does agree that women have yet to chieve full equality.

The feminist approaches already considered tend to assume that most women live in conventional nuclear families and that they share a similar experience of family life. However, difference feminists argue that women have very different experiences of the family from one another and so therefore cannot be generalised. For example, working-class and middle-class women, black and white women and lesbian and heterosexual women all share different experiences so therefore cannot be compared. Black feminists argue that by regarding the family solely on a source of ppression, white feminists neglect black women’s experiences of racial oppression.

The black family is positively viewed as a source of support and resistance against racism by black feminists. However other feminists argue that this approach neglects the fact that, despite such differences, women do in fact share many of the same experiences. For example, women face a greater risk of domestic violence and sexual assault and low pay compared with men. Feminism is criticised for ignoring the increased family diversity of families in the modern day, and although the nuclear family remains important, it is by no means the only family type.

Examine the ways in which feminism has contributed. (2018, Sep 11). Retrieved from http://studymoose.com/examine-the-ways-in-which-feminism-has-contributed-essay 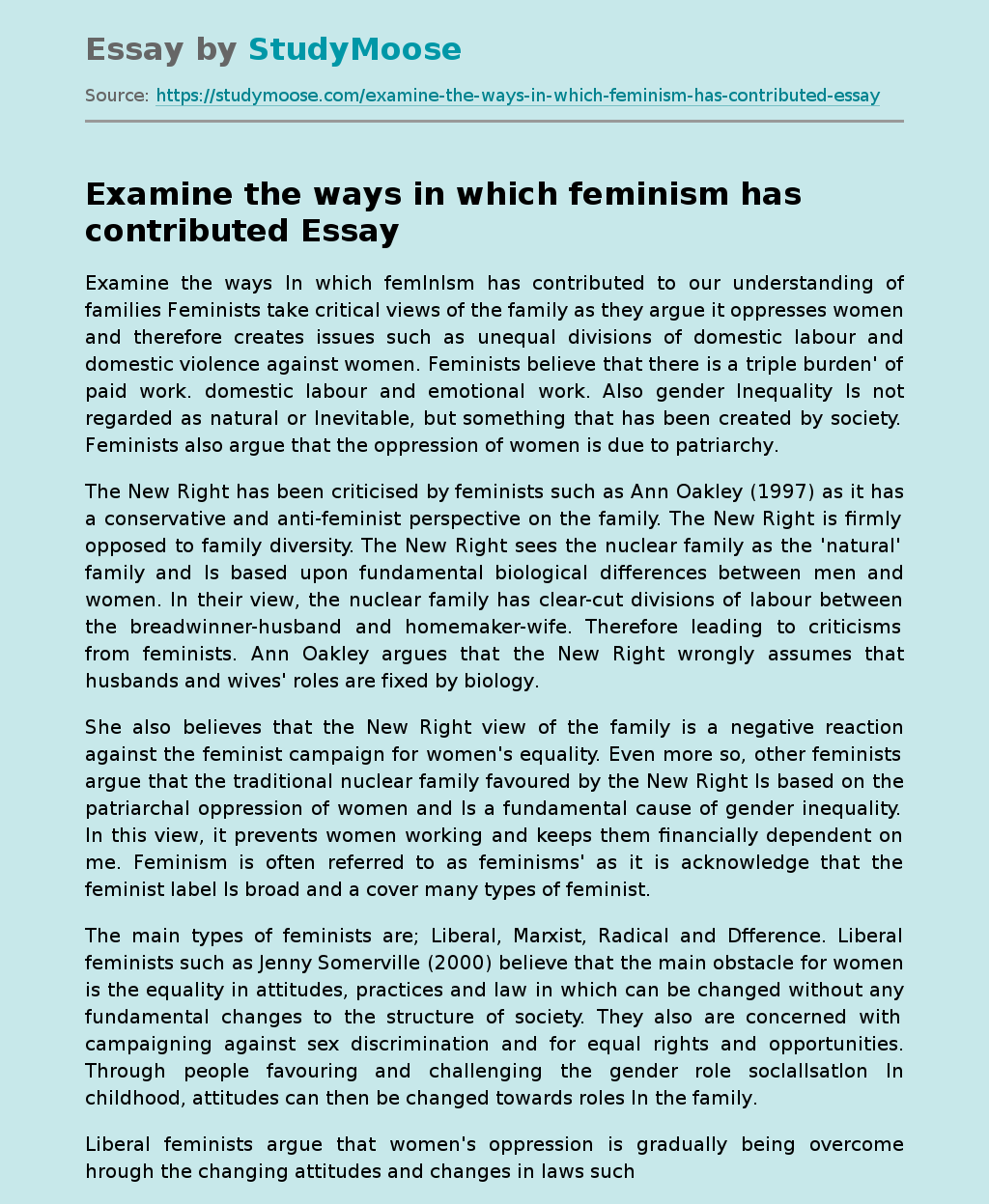