Scene 2 of Act five in William Shakespeare’s “Othello” is the climax of the play. The reason being, in this scene the tragic hero, Othello, kills his wife, Desdemona, as he believes that she has slept with one of his men, Cassio. However, this is merely a plot formed by, Iago, one of Cassio’s former peers, whom he is jealous of as the promotion he hoped to get was given to Cassio by Othello.

Much of the dramatic tension comes from the agonising wait that Shakespeare makes his audience endure while Othello performs his soliloquy and they don’t know whether Othello will not only kill his wife, Desdemona.

Don't use plagiarized sources. Get your custom essay on
“ Examine the Method that Shakespeare Employs to Make the Final Scene of “Othello” Dramatically Effective ”
Get custom paper
NEW! smart matching with writer

This is a very strong contrast to the chaotic events that take place before this scene and provide a dramatic atmosphere not yet explored in the play. Throughout the play audiences sympathy for Othello has been preserved, as he has been the innocent party.

This innocence is now at stake as he contemplates with increasing intent, the possibility of killing her.

It seems that for once in the play, time slows down to a crawl as Othello’s mind races back and forth over this moral dilemma. What only increases this tension is greatened by Othello’s persistent wavering indecisiveness that can be illustrated by the first line of his soliloquy, “It is the cause, it is the cause, my soul”. This repetition of the phrase “It is the cause” is saying that he cannot find a just enough reason to kill her and that he is finding it impossible to leave his beloved wife.

On the other hand Othello feels that it is his duty as an enforcer of justice to prevent Desdemona from doing the same to other men (saving mankind) and committing further sins.

It also seems that Othello constantly tries to avoid confronting his deed head on by constantly symbolising his wife and using analogies, he refers her to such things as, a rose or a candle. He proceeds to speak of Desdemona’s white skin and how it is as “smooth, monumental as alabaster”. This could be interpreted in many ways; He could be saying that he does not want to kill her, or that he wants to preserve someone of such beauty in a life like state (i.e. he wants to kill her in a way that does not deface her body) but it could also be construed as a reference to a tomb, meaning that Desdemona is dead to Othello already.

The tension really starts to build as Desdemona wakes up and Othello slowly reveals his intentions and the audience’s hope of her survival slowly diminishes. Finally when Othello suffocates his wife, he seems to revert back to mercy and mistakes Emilia’s calls for the dying cries of Desdemona “What noise is this? Not dead? Not yet quite dead? I that am cruel am yet merciful; I would not have thee linger in thy pain: So, so.” One can see from this excerpt that although he is vengeful he does not want his wife to suffer.

The atmosphere worsens even more as Othello gets more panicked and delirious, upon contemplating how to conceal his deed. This can be seen in his speech at line 90 when he realises Emilia is at his chamber door as his speech seems somewhat flustered and his sentences fragmented “Yes: ’tis Emilia. By and by. She’s dead. ‘Tis like she comes to speak of Cassio’s death. The noise was here. Ha! No more moving? Still as the grave. Shall she come in? Were’t good?”

Soon after Emilia enters she hears Desdemona (whom Othello thought was dead) cry out. After Emilia asks who was responsible for her death, Desdemona replies with her final breath “Nobody; I myself. Farewell.” This shows the sheer loyalty of Othello’s wife and further illustrates how grave a mistake it was for Othello to kill her. Now although there is nothing saying that Othello regretted or felt remorse for killing his wife, it is very clear that he understands what he has lost. He goes on to link Desdemona’s demise to the most significant of natural events ” Methinks it should now be a huge eclipse, Of sun and moon, and th’affrighted globe, should yawn at alteration'”

As Emilia walks in the room it seems as if she has become the voice that expresses the audience’s feelings of outrage “O, the more angel she,

And you the blacker devil!” It seems that Emilia’s duty in this scene is to defend Desdemona’s honour “Thou art rash as fire, to say, That she was false: O, she was heavenly true!” and it seems that she sees the stories of Dedemona and Cassio’s relations for the lies they truly are (something the audience obviously hoped Othello would do) “If he say so, may his pernicious soul

Rot half a grain a day! he lies to the heart”.

Examine the Method that Shakespeare Employs to Make the Final Scene of "Othello" Dramatically Effective. (2020, Jun 02). Retrieved from https://studymoose.com/examine-method-shakespeare-employs-make-final-scene-othello-dramatically-effective-new-essay 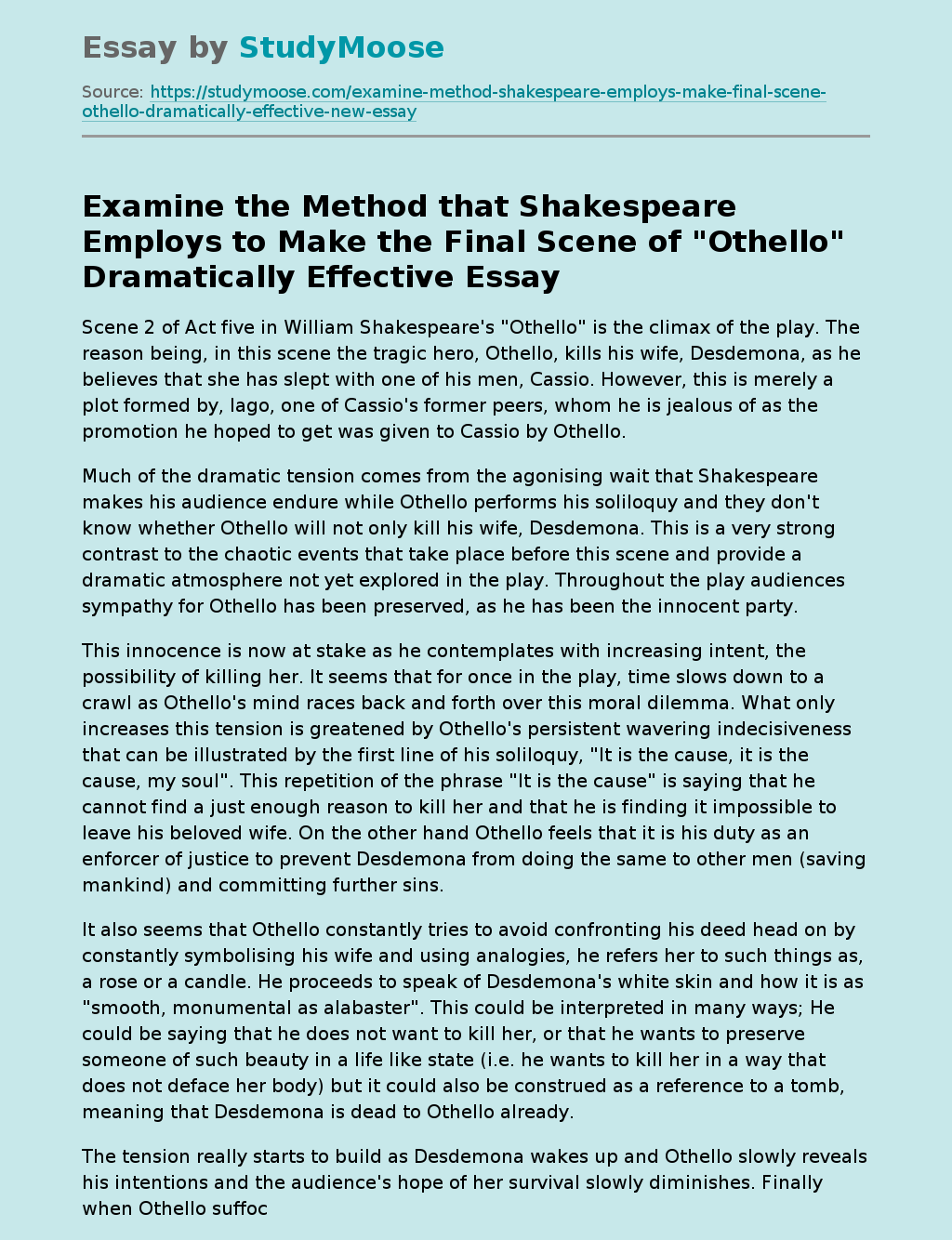