Examine Critically, with reference to language

The play ‘Hamlet’ is often classified as one of the most complex plays in the history of Literature. This play, by the greatest of playwrights, William Shakespeare, is regarded as ‘a tragedy of the human soul, of which the highest and noblest qualities become under the influence of evil and wickedness in this world, the causes of its own failure and ruin. ‘ Hamlet is chiefly a study of character, rather than a drama of action.

‘Hamlet’ was written when Shakespeare was in the bitter mood of self-contempt and disgust with experiences of abused sex and human vice that came to him after his tryst with ‘The Dark Lady of the Sonnets’.

Don't use plagiarized sources. Get your custom essay on
“ Examine Critically, with reference to language ”
Get custom paper
NEW! smart matching with writer

Shakespeare digresses from the original story, ‘Amleth’ by Saxo Gramatticus, with his introduction of the theme, ‘Frailty thy name is woman’ and its projection in the two weak female characters of Gertrude and Ophelia. This gives vent to his deep internal conflict and dark hatred of lustful sex and contempt for the two women with whom Shakespeare himself had sinned.

Hamlet’s relationship with his parents, particularly his mother, is the pivotal point of the play. It is clear, right from the very beginning, that Hamlet has a deep relationship with Gertrude, and loves her and respects her immensely. Gertrude is one of the springs of action, and her relationship with Hamlet is important in the dramatic scheme. Hamlets despair stems from his mother’s hasty marriage to his uncle and it is that, which is the driving force behind what is communicated.

But the exact reason for Hamlet’s despair is a very controversial issue.

Hamlet is probably hurt because after his father’s death his illusions of his perfect family are shattered. His image of his mother is completely shattered after her marriage to Claudius because Hamlet had witnessed his father’s undying love for his mother, before and even after his death. Even critics such as T. S. Eliot think that Hamlet is just disgusted with his mother: ‘The essential emotion of the play is he feeling of a son towards a guilty mother… Hamlet (the man) is dominated by an emotion, which is inexpressible, it is in excess of the facts as they appear….

Hamlet is up against the difficulty that his disgust is occasioned by his mother, but that his mother is not an adequate equivalent for it; his disgust envelops and exceeds her. ‘ This may be an appropriate starting point, because the idea of ‘excess’ has been a feature of all Hamlets’ criticism. Hamlet is excessively philosophical. And there is no balance in his personality. He is of an extremely sensitive nature, and thus his mother’s hasty marriage has scarred him deeper than it should have. This ‘excessive’ despair, due to his mother’s sin, is often even said to be, due to Hamlet’s Oedipus Complex.

Hamlet is more vexed by his mother’s incestuous marriage, than his father’s murder. And being the philosopher that he was, this may not necessarily be because of unnatural feelings towards his mother, but because he may have even suspected his mother a party to King Hamlet’s murder. His constant repetition of the time in which she took to remarry, “But two months dead.. Yet within a month.. A little month.. Within a month… most wicked speed,” suggests disgust at the situation and it is not necessarily the fact that she remarried; more the short time in which it occurred.

This reflects the theme of Haste versus Procrastination. Where we see the contrast in the nature of the mother and son. Gertrude hastily gives in to carnal pleasure, without stopping to think of the outcome of her marriage. Where as Hamlet, being a thinker, gives a little too much time to the conflict in his mind, and delays his action. Procrastination was Hamlet’s fatal flaw. He gave too much room for doubt in his mind, and this almost led him to insanity, and caused him to ruin the bright future he would have had.

His lack of action makes him spend hours pondering over the immorality of the world around him, especially his mother and he feels almost betrayed by his her, so much so that he wants his “too sullied flesh” to “melt, thaw and resolve itself into dew. ” His mother’s action, makes his world weary, “How weary, stale, flat and unprofitable seem to me all the uses of the world” Where the build up of adjectives, one after the other, seem to highlight the intensity of Hamlet’s emotions. He is constantly changing the subject using short, broken sentences, which show his disillusionment, and pattern of thought.

Examine Critically, with reference to language. (2020, Jun 02). Retrieved from http://studymoose.com/examine-critically-reference-language-hamlets-relationship-mother-gertrude-2343-new-essay 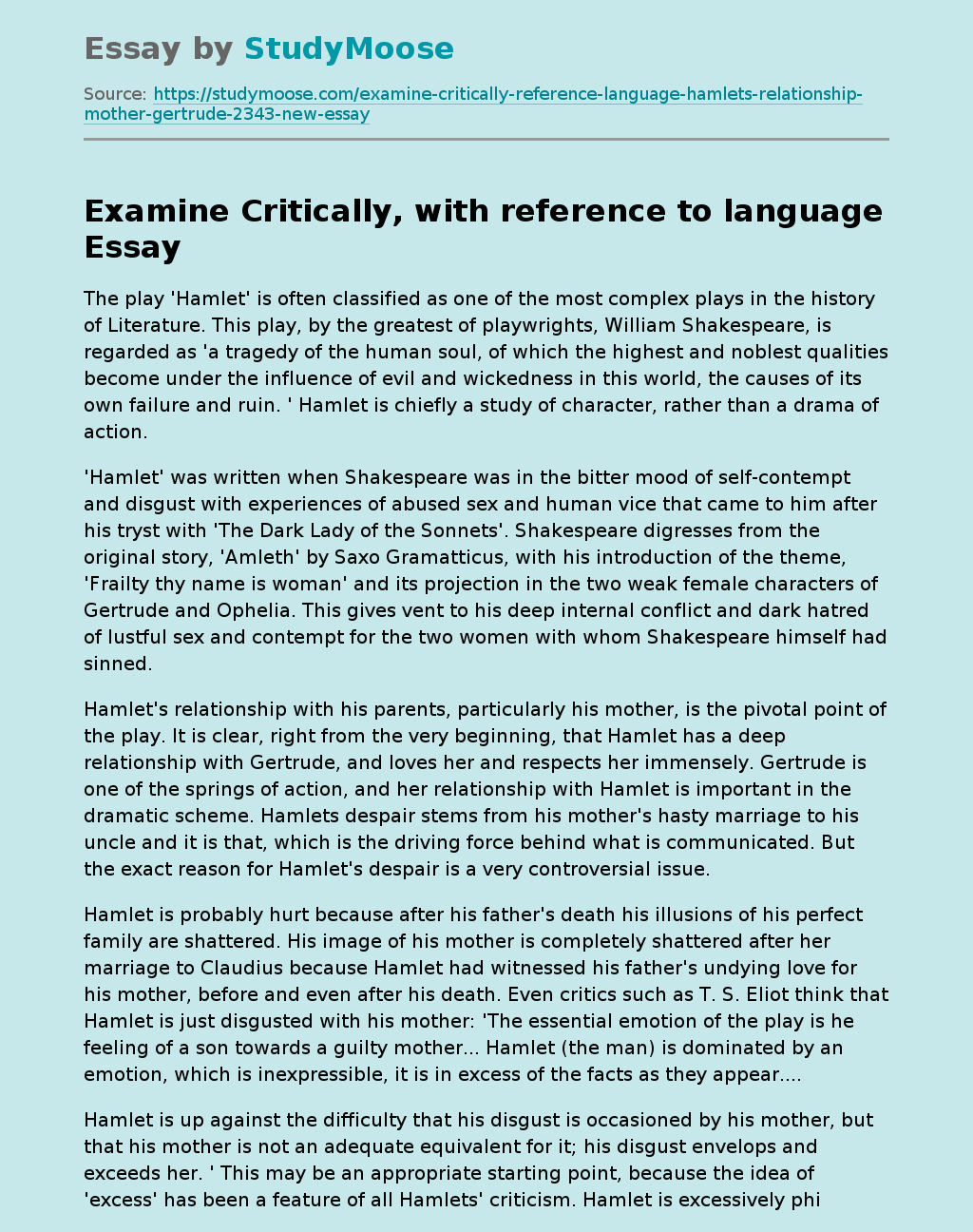