By Examination of Hamlet's Soliloquies

Shakespeare’s play ‘Hamlet is a revenge tragedy because it deals with certain universal and also serious themes such as suicide, murder and incest. It also fits into this genre of literature because it uncovers the death of the central character. These matters, as well as the presence of religion were dominant in people’s lives in this era and they would react to them because of the dominance they had in their daily lives. A modern audience would also be seen to react because the themes are still relevant to them today.

Don't use plagiarized sources. Get your custom essay on
“ By Examination of Hamlet’s Soliloquies ”
Get custom paper
NEW! smart matching with writer

It must be noted that the play was written 70 years before the Reformation, and the dominant theme, religion played a major part in people’s lives. The idea for ‘Hamlet,’ thought to originate from the Scandinavian legend ‘Beowulf’ and the ‘Historia Danica’ shows some evidence that Shakespeare was influenced by the works of Thomas Kyd and Frani?? ois De Belleforest as they all contain similarities. The Classical dramatist, Seneca arguably had one of the greatest impacts upon the development of this particular tragedy.

He ‘revelled in sensational and shocking displays of violence and horror…’ and displayed the dominant motive of revenge in his plays.

The impact his tragedies had upon English drama was extreme and was an influence to some of Shakespeare’s contemporaries. This was apparent, as shown in Shakespeare’s soliloquies and this will be explored in the essay. Act 1 Scene 2 presents Hamlet’s principal, much-needed soliloquy and sees venting his anger and frustration. It also shows him questioning the church and religion, and one must feel he is correct in this case; the church taught that ghosts failed to exist.

Hamlet, the Renaissance thinker appears to battle with his Christian beliefs, as he is evidently confused.

This is a view which a modern audience would to a certain degree sympathise with as the secularisation of society takes place. ‘… the Everlasting had not fixed’ is of course a quote from Exodus and a reference to suicide. These definite thoughts enter his head very early on in the play, and rhetorical questions are used to highlight his mental instability. Hamlet also demeans and shows his general disgust about women, which is apparent in the way he makes judgements about his mother, using the derogatory comment ‘Frailty, thy name is woman,’ insinuating that all women are unfaithful and disingenuous, as he believes her to be.

This has prompted suggestions from literary critics that the Oedipus Complex plagued Hamlet and this may have been an explanation for his chaotic and confused state of mind. Making comparative references between his mother and classical mythological creatures may seem surprising, but Gertrude is an influential figure for Hamlet and he openly condemns her apparently ‘incestuous’ behaviour. He dwells upon the fact that his life, and indeed the world seems ‘Weary, stale, flat and unprofitable as discussed in Shakespeare’s abrupt and broken syntax. ‘ The exercise of caesura shows a breakdown of Hamlet’s thinking.

It would allow an actor to fully express his emotions on stage, whilst the blank verse replaces the iambic pentameter, which stops suddenly. It is not as controlled in rhythm but conveys furthermore the upheaval Hamlet becomes ever-more familiar with. His bitter, enraged tone gives the audience the impression that he has the possibility of committing irrational deeds, as he is constantly indecisive; rhetorical questions confirm this as he further questions his state of mind, but also feels compelled to hold his tongue, maintaining his isolation.

Shakespeare’s use of sibilance manages to personify the ‘incestuous sheets’ in his choice of words and this makes Hamlet further sure that his observations are correct. The whole purpose of a soliloquy is to use inner dialogue in order to reveal a character’s state of mind, which this clearly does at this early point in the play. All of the themes raised in this soliloquy are relevant to both audiences, and an Elizabethan audience would certainly interpret this soliloquy in a different way to a modern audience. Hamlet’s belittling comments passed about women would still be deemed as unacceptable.

Much like Renaissance thinkers, a modern audience would also feel more able and willing to question the church’s teachings, as religion is no longer the dominant focus in many people’s lives as it was in the Middle Ages. The audience may be able to show a degree of empathy with Hamlet as the play was written in a slightly satirical manner and shows that he is very much human in his qualities and this first soliloquy is crucial in identifying this through a persistent melancholy tone. A modern director could go to great lengths to emphasise this mood in the way that he controlled the actor’s position and body language on stage.

The short but detailed soliloquy in Act One Scene 5 is perhaps a clarification of the preceding scene where the ghost has just finished speaking to Hamlet; some may choose to believe that this is his conscience communicating with him. He now has just a very tenuous grasp on his sanity and his despair is apparent because of his grief. The monarch was the supreme ruler in Elizabethan society and was an authoritative figure for the whole of society, so Hamlet decides that if Claudius can maintain his smug fai?? ade, even after he has murdered the King, then Hamlet should be capable of doing the same with his revenge.

It is the first scene in which revenge; the dominant theme in the play has been discussed. Hamlet unmistakably utters ‘I have sworn’t,’ an expression of his intent to kill the ‘Smiling, damni?? d villain,’ even if he must pay the ultimate price for taking action against his emotions, still his father’s memory present in his mind. This creates a picture of Hamlet, the Renaissance thinker, but who does not know what to actually think, ideas taken from the society he lived in, increasingly dominated by central political institutions. This would have been a major contributing factor to his personality

Again, Hamlet passes judgemental comments about women, in particular his mother ‘O most pernicious woman! ‘ The amount of repetition is used to show the turmoil in Hamlet’s mind; he also appals to his body to ‘hold him up’ whilst he overcomes the difficulties he currently faces. There is also repetition used in the same lines as the ghost in the previous stanzas. Exclamatory lines highlight a sense of disgust towards his mother, her loyalty and Claudius, who feels he has escaped punishment for his unforgivable, calculated actions. An Elizabethan audience would protest a great deal about the controversial content of this soliloquy.

They believed the Divine Right dictated that they must not kill the King (God’s representative) and that the individual pursuit of revenge was wrong. A modern audience would possibly be more sympathetic and less judging because they are able to see Hamlet’s insecurity and anxiousness, but they may also be more cynical, provoking the question ‘Why would he take advice from a ghost? Ghosts have never existed’ This same audience would perhaps show some compassion towards Hamlet in his current circumstances as revenge is a recurring topic in modern society, not only on an individual level, but also on a worldwide scale.

Theatre brought out the truth in people, and in this case, it is no exception; the truth reveals itself about both Gertrude and Claudius through the ghost. It would be a requirement that a 21st century director would instruct the use of caesura in order to convey Hamlet’s troubled state of mind in a suitable manner, as he struggles to familiarise himself with the actions he must perform. He must also direct the controversial issues with sensitivity.

By Examination of Hamlet's Soliloquies. (2020, Jun 02). Retrieved from http://studymoose.com/examination-hamlets-soliloquies-2194-new-essay 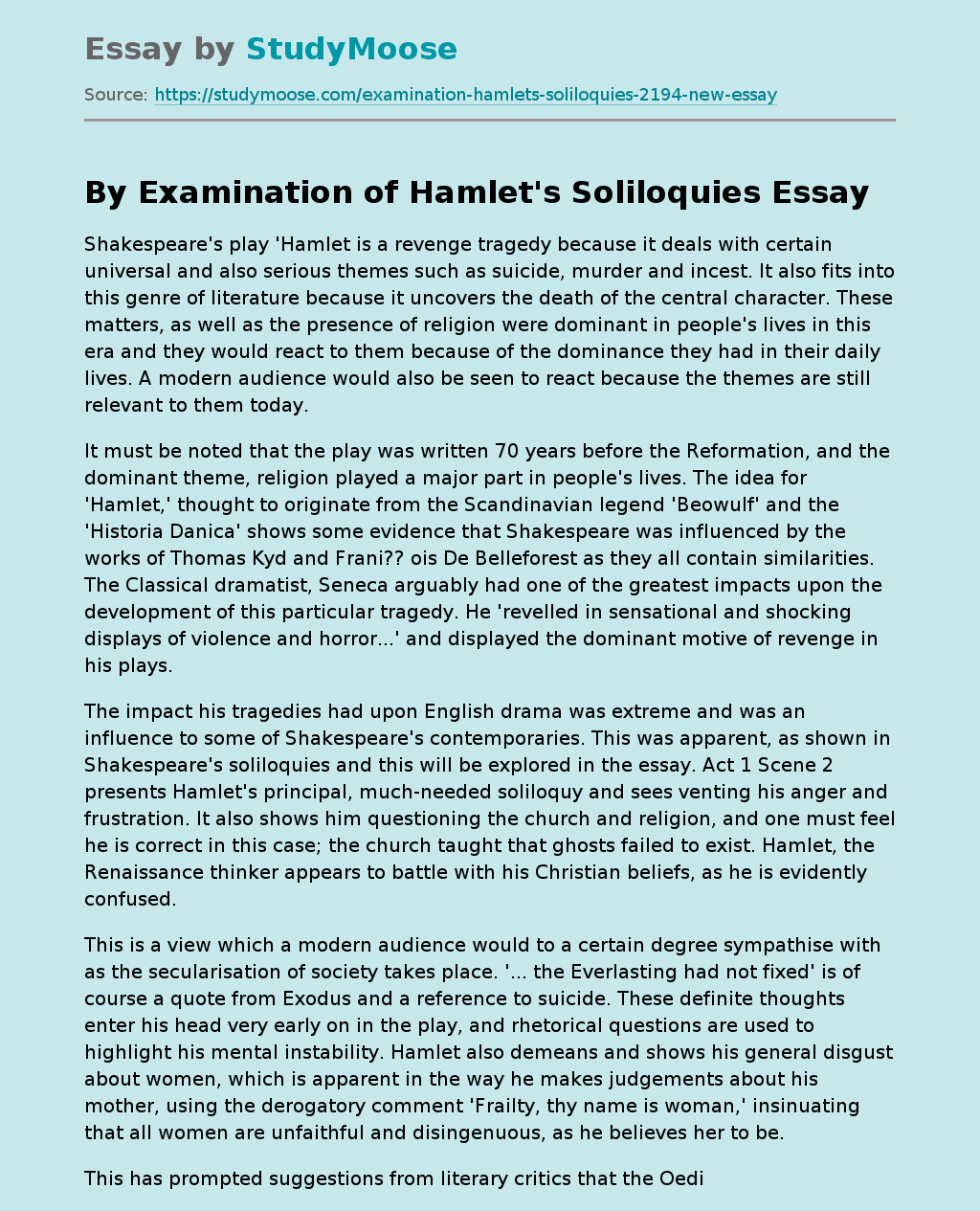