The causes for this uprising include:
A recent outbreak of cholera in the lower class Parisian areas, thought to be due to the government poisoning inner-city wells. The deaths of two famous politicians: General Jean Lamarque and Prime Minister Casimir Perier. Anger at monarch Louis-Philippe for taking the throne after the July Uprising of 1830.

Cloitre Saint-Merri:
Just outside of this church was the last standing barricade of the June Rebellion. This particular barricade, which was the center of the revolution itself contained the most famous revolutionary of the Rebellion as well as the likely inspiration for Victor Hugo’s book: Charles Jeanne, the head of the insurgents.

Don't use plagiarized sources. Get your custom essay on
“ Evidence of the June Rebellion and Les Miserables in Modern-Day Paris ”
Get custom paper
NEW! smart matching with writer

Le Cafe Musain:
Les Amis De L’ABC were said to meet in the back of this café, positioned on The Place Saint-Michel, which is now called Place Edmond Rostand. Unfortunately, the place where the café is said to have stood is now occupied by……a Quality Burgers.

Napoleon’s Elephant:
In the former site of the Bastille fortress, Napoleon ordered a statue of an elephant to be built in honor of his new empire.

Due to the fall of Napoleon, the elephant remained half finished for years, until Louis-Philippe chose to replace it with the July Column in remembrance of the revolution that gave him the throne. In both the book and 2012 movie of Les Miserables, Gavroche is seen living inside of this elephant.

Eglise Saint-Paul-Saint-Louis
Victor Hugo chose this church to be the one in which two of his main characters, Marius and Cosette, got married.

It’s no coincidence that only 19 years before his book was published, Hugo’s own daughter was married in the same church.

Evidence of the June Rebellion and Les Miserables in Modern-Day Paris. (2016, Apr 07). Retrieved from https://studymoose.com/evidence-of-the-june-rebellion-and-les-miserables-in-modern-day-paris-essay 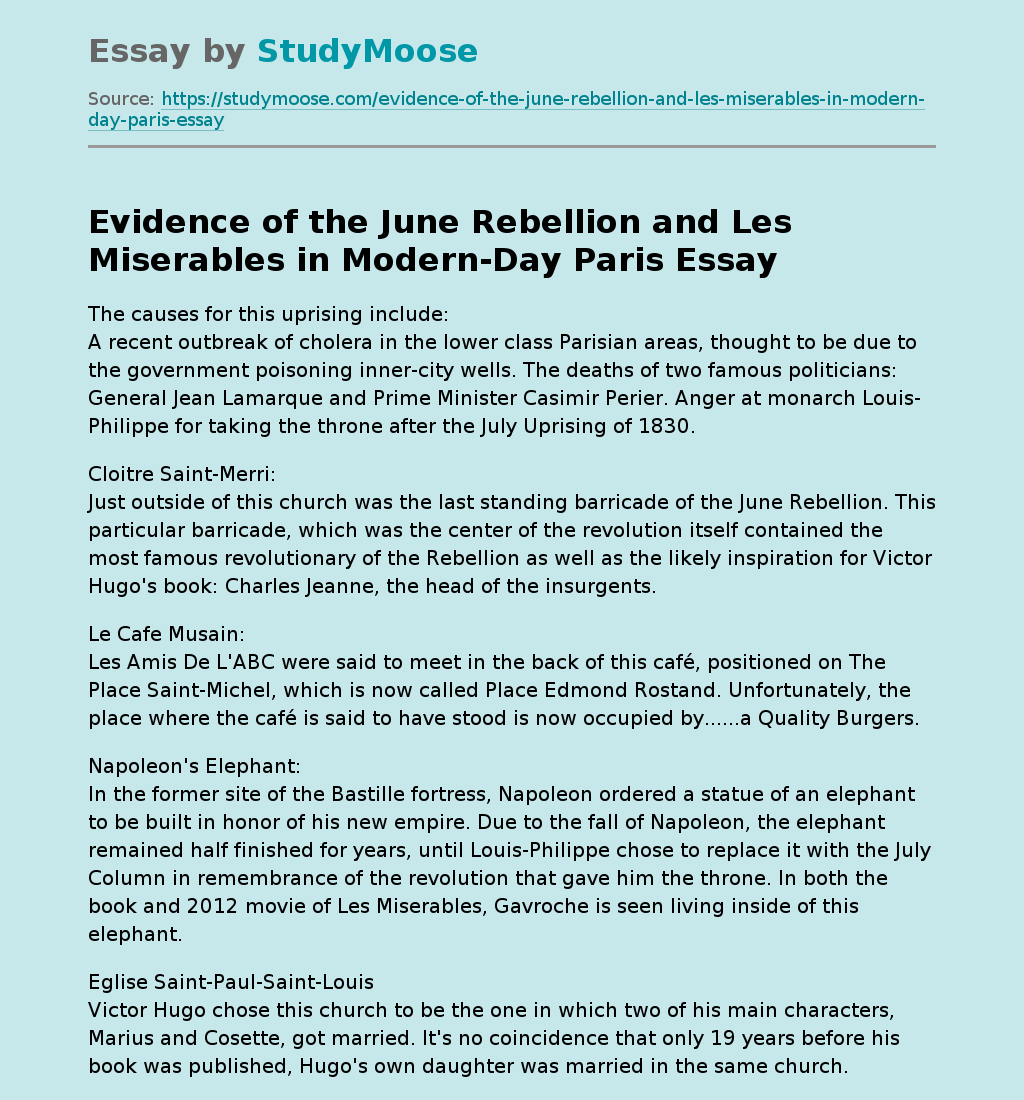