Everyone has the Right to Freedom

The United States of America was established on the basis that all people are free to act, speak, and think how they choose. It has been a home and a place of refuge for many people of many different backgrounds to establish themselves and live as free members of society. But behind this façade of acceptance, the government hides the truth that freedom is nonexistent in the United States. So, when one actually examines freedom in a broader perspective its true paradoxical nature is revealed.

Don't use plagiarized sources. Get your custom essay on
“ Everyone has the Right to Freedom ”
Get custom paper
NEW! smart matching with writer

Although society can be brainwashed into thinking they are truly free, there are always social, economic, and political factors that imprisons them from attaining the ability to act without restriction. This unattainable concept is always hindered by consequences; therefore, as long as society is governed by rules and regulations freedom cannot exist to its fullest extent.

When taken literally, freedom is the ability to do what one chooses without ramifications, but this definition can be easily discredited by examining the justice system that we are governed by.

In the United States the First Amendment to the Constitution allows it citizens to have the freedom of speech. This protects one’s basic right to express ideas and opinions without restriction, but there have been many cases of censorship in the United States that blatantly violate this privilege. Books such as To Kill a Mockingbird and The Lord of the Flies have been banned from schools because they contain offense language or bring up controversial issues. Censorship became even more prominent with the 2016 Presidential Election when news outlets were accused of reporting “fake news” because they spoke out against the president and his policies.

This campaign combating “fake news” is an overt attempt at preventing these outlets from expressing their basic right of freedom of speech. While on the outside it may look like all Americans are free to speak their minds and stand up for their beliefs, the government discreetly silences those who oppose them. When one really examines it, those in society are just as free as those confined in jail. At first glance, prisoners look completely different from those living in the “free world”. In jail they are told what to wear, where to go, what to eat, and what to do at all times and while it may not be this extreme in society, subconsciously the same thing is happening to us. The media and government constantly influence our thoughts, actions, and decisions without us even being aware of it. So, while prisoners are thought of as people who were stripped of their rights for committing a crime, one has to take a step back and wonder if society ever had that freedom to begin with.

It is possible for us to feel free at times, but we are never actually free to the fullest extent. Outside factors such as work, school, family, and friends hold us back from reaching our full potential and we are even confined by the abstract idea of time. Time is fleeting and we are always imprisoned by deadlines and the idea that one day our time on earth will come to an end. Although many may not be aware, we are all prisoners of our own mind. Our own thoughts and worries are inescapable and we are held back by anxieties and insecurities in a world full of social pressures. Social media has an unshakable hold on many minds and has an exceptionally great influence on youth of this generation. We are never free from our own doubts about what other people will think about us or judge us based on what we post on the internet. As intriguing as the feeling of freedom may seem, our own minds prevent us from attaining it.

If everyone was completely free in the way we are conditioned to believe, the world would be in anarchy. Without laws and regulations nothing would restrict anyone from killing, stealing, or doing anything that causes harm to others. Society today has many flaws but is able to exist in a peaceful manner because of these laws. We forfeit our freedom for the good of humanity because these rules and consequences help to create structure and harmony in society. For example, if a teacher faced no backlash for not showing up to work, what would ensure that they went to school every day to teach the next generation of students? Repercussions like getting fired for not attending work help increase the chances that people will chose to engage in positive conduct and avoid destructive behavior.

Although this idea of complete and unrestricted freedom is unattainable, there are many outlets that one can put their energy into in order to escape from the pressures of everyday life. I personally find my escape in sports. Ever since I was young I played a plethora of sports and it became a vital component of my life. I even continued playing basketball and softball throughout high school and I plan on continuing my basketball career at TCNJ. Sports has allowed me to overcome monumental challenges that I encountered and by putting all of my focus into what’s happening on the court or the field I am able to forget about the outside world. But it only serves as a temporary high and as soon and the buzzer goes off or the whistle blows, I am forced back into reality. But even in the place where I find my “freedom” I am not actually free. There are rules set up, enforced by umpires and referees, in order to ensure that each game is played as justly as possible and coaches monitor the team’s every move and tell them where to go or what to do. My dad was my first coach and my number one supporter through all my years of playing sports. He has been to every single one of my games and is the reason that I started playing sports. I am fully indebted to him because he introduced me to my version of freedom and this way to find an escape. Without him my idea of freedom would be completely altered.

Freedom does not exist to me, as I have been in a constant struggle with my parents my entire life. Being an only child, my parents monitored my every move and put so many restrictions on what I could and could not do. They tried to control so many aspects of my life and it contributed to my current belief that freedom is an unattainable entity. I very much crave freedom in a sense that I am unrestricted from my parent’s control and since moving into college, I have become much closer to and more aware of this abstract concept of freedom.

First negative effect of capturing animals is lack of freedom. The animals should be in the place where they belong. An animals staying in the cage seem kind of tortured. Of course, they are tortured and for sure, it is hard time for animals to stay in the cage for the rest of their lives. “When we lose the right to be different, we lose the privilege to be free” (Hughes). Wild animals are supposed to live wildlife, supposed to hunt and survive as they live their own typical life.

Although animals in the zoo will be released by any opportunities however they will never be able to survive in wildlife. This is due to the lack of experience in wildlife and they wont be easily adapted to the new environment. Is not only freedom an animal, who being captive in a zoo, their chance for survival is no longer their control. Many people thinking Some schools organize school trips to the zoo, for educational purposes. Many people say that zoos are indeed educational.

However in reality people spend only few minutes of their time to look at one animal, therefore there is nothing educational about. It is even easier to watch the same thing on TV or go online. Although some people claim that there is a quite natural environment in the zoo there is nothing natural about it. For instance, water animals don’t have the required amount of water, or birds cannot fly as much distance that they actually need. Some animals require privacy and seclusion, but this definitely is not happening in the zoo.

As a result animals end up having abnormal behavior or even worse the degeneration of the species. The bears cannot hibernate, lions continuously walk in circles, giraffes and elephants bang their heads on the bars and etc. Zoos say they actually protect animals from extinction, but in reality they do the opposite. Unfortunately some of the animals will never be released to their wild environment, but even if they would there is no a chance they would survive.

The saddest thing is that the money spent on zoo ticket let people look at animals to be imprisoned and traded. In the modern world it is considered to be normal to capture animals from their natural wild environment and put on display. For example, pandas are one of the rarest animals in the world. It is such a sensitive animal that requires seclusion and privacy. A pandas are almost one step from degeneration, but it doesn’t stop Chinese government to rent pandas zoos all over the world for tremendous amount of money.

Another good example is African elephant, in its natural and wild environment the average lifespan is 56 years. However in zoos these elephants have lifespan of 16. 9 years. In fact many zoos finding it out closing the elephants exhibits, but it doesn’t prevent all of the zoos close these exhibits. Another very upsetting fact that the zoos with small budget reduce their supply on cages or order a smaller cages with less foliage. Indeed, this makes animals’ lives almost unbearable. It is so sad that those animals are being captured only for entertainment purposes.

Everyone has the Right to Freedom. (2021, Mar 03). Retrieved from https://studymoose.com/everyone-has-the-right-to-freedom-essay 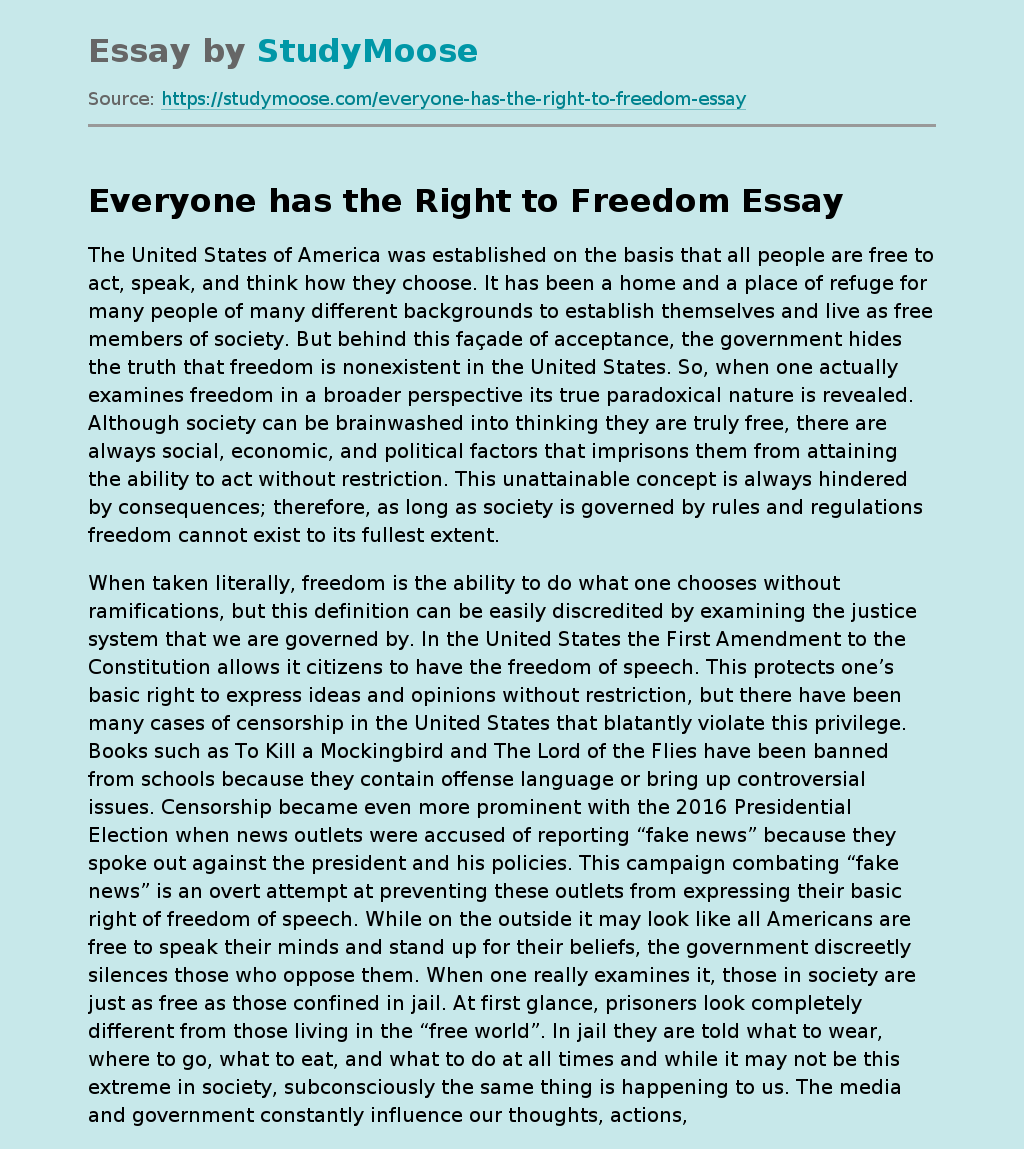