Don't use plagiarized sources. Get your custom essay on
“ “Everyman” and “Doctor Faustus” ”
Get custom paper
NEW! smart matching with writer

Everyman centers around allegory. It focuses on the allegorical representations of moral issues with the inclusion of figures that represent abstractions of the issues that are confronted. Doctor Faustus follows the general five-act structure of an Elizabethan Romantic Tragedy. However Christopher Marlowe used the structure of an older Medieval form of English Drama, the morality play as a model.

Morality plays tended to show the moral struggle of mans soul and the conflict of good and evil. This is evident in the play of Doctor Faustus who is embroiled in a battle between the temptation of the devil and God.

You could argue that Doctor Faustus is not classed as a morality play. Because in the tradition of a morality play God and the devil are external forces that affect the individual. However, in Doctor Faustus it is far more of an internal drama inside Faustus’ own mind. Both are entirely didactic in nature, they were made with the intent to educate their audience in one respect or another.

There was a moral to each that conveyed similar messages. Therefore the term ‘morality play’ correctly defines each one. The medieval time period in which Everyman was written contained a society that revolved around religion (Ecclesiasticism) The fact that Everyman can get nowhere without turning to religion directly reflects on the attitudes of the middle ages. There is constant references to the beliefs and ideas of the Catholic Church such as confession, penitence and the Virgin Mary this suggests the catholic centered society in which the play existed. It concentrates on the qualities of the catholic religion that are important in the journey to heaven. Everyman is a symbol of the human condition and how it is understood by medieval Catholicism. Whereas in the sixteenth century in which Doctor Faustus was written, saw a shift of Christian ideals.

No longer was there only the strict belief in God but also the equal belief in the existence of the devil and the “work of the devil.” The medieval world placed God at the centre of existence, leaving the individual and the natural world in second place. The emergence of the Renaissance is evident in Doctor Faustus by the clash between the church and the introduction of knowledge through science. The Reformation caused a dramatic change at that particular time, England had converted from predominantly catholic to a protestant country. This shift becomes apparent in Doctor Faustus in the scenes with the Pope. The Renaissance was also a time when the bubonic plague was at its peak of destruction. As a result the plague was a great concern of the theatre, audiences and writers. The plague was a large part of Marlowe’s life and work. Marlowe refers to the plague regularly in Doctor Faustus with examples such as “A Plague on her.” Here Marlowe is using specific language to reflect certain aspect of the precise period, being Reformation. When considering the audience of each play, this can again create disagreement concerning the meaning of the term ‘morality play.’ Morality plays, as I have mentioned like Everyman, primarily express aspects of moral doctrine to the audience.

In the Play Everyman, the anonymous author may have been a priest or teacher who was explaining the Christian values to an uneducated society. It is written by and for people of catholic religion. This would fit accurately into the description as a ‘morality play.’ However, some may argue that Doctor Faustus is more comically delivered as opposed to morally. Elizabethan audiences often viewed great tragedies such as this in a slightly humorous manner. Scenes such as the one with the Pope’s food and drink being stolen highlights this point. Also Marlowe includes numerous comical characters such as Wagner and Faustus’ servant. Therefore can we still group this together with the other morality plays such as Doctor Faustus? Contrary to this, it is clear that the audience of the play Doctor Faustus are not simply an audience of ‘Commoners or clowns,’ they have to employ a certain level of intelligence and education to understand the symbolism and allegory present in the play. We can acknowledge the play of Doctor Faustus as one from the Elizabethan period as its verbs differ from modern day usage, with phrases such as “What see you?” and “You look not well.” Also Elizabethan playwrights wrote in blank verse or iambic pentameter, as its evident here.

Marlowe uses various Christian phrases to summon the devil, who is providing the power. The most obvious reference to Christian language is shown through Faustus’ Latin Chant which is used to raise the devil. Marlowe’s technique of hyperbole is demonstrated by his regular usage of blasphemy in the play. By using exaggeration like this, Marlowe is affecting the audience’s perception of the character of Faustus. The language used gives the character heroic stature. Contrast to Doctor Faustus, The language in Everyman is solely based on religion. There is reference to the original sinner Adam and the seven deadly sins, this mainly focuses on the notions of Christianity. The language used in both Everyman and Doctor Faustus represents the conflict between power and Christianity. In conclusion, Marlowe borrows many of the conventions of a morality play especially with the inclusion of the good and bad angels. This symbolizes his divided will.

This is mirrored in the play Everyman where there is an obvious spiritual crisis of an individual who must chose between good and evil. Both Everyman and Doctor Faustus effectively reflect the periods in which they were written. Faustus is the product of an era that was deeply torn, it stands in the threshold between two periods-The Renaissance and the Middle Ages. It includes the notions of Good and evil, sin and salvation, as did religious dramas of the medieval period such as Everyman. Although some may see this comparison as the rejection of the medieval due to further emphasis on the individual rather than God.

After all, the opening scene of Doctor Faustus was praising science and magic in favour of God. So where do we draw the line? Everyman statically reflects the period of medieval whereas Doctor Faustus focuses on the actual change in that particular period of the Reformation. Therefore it is possible to see the alteration from one period to another. 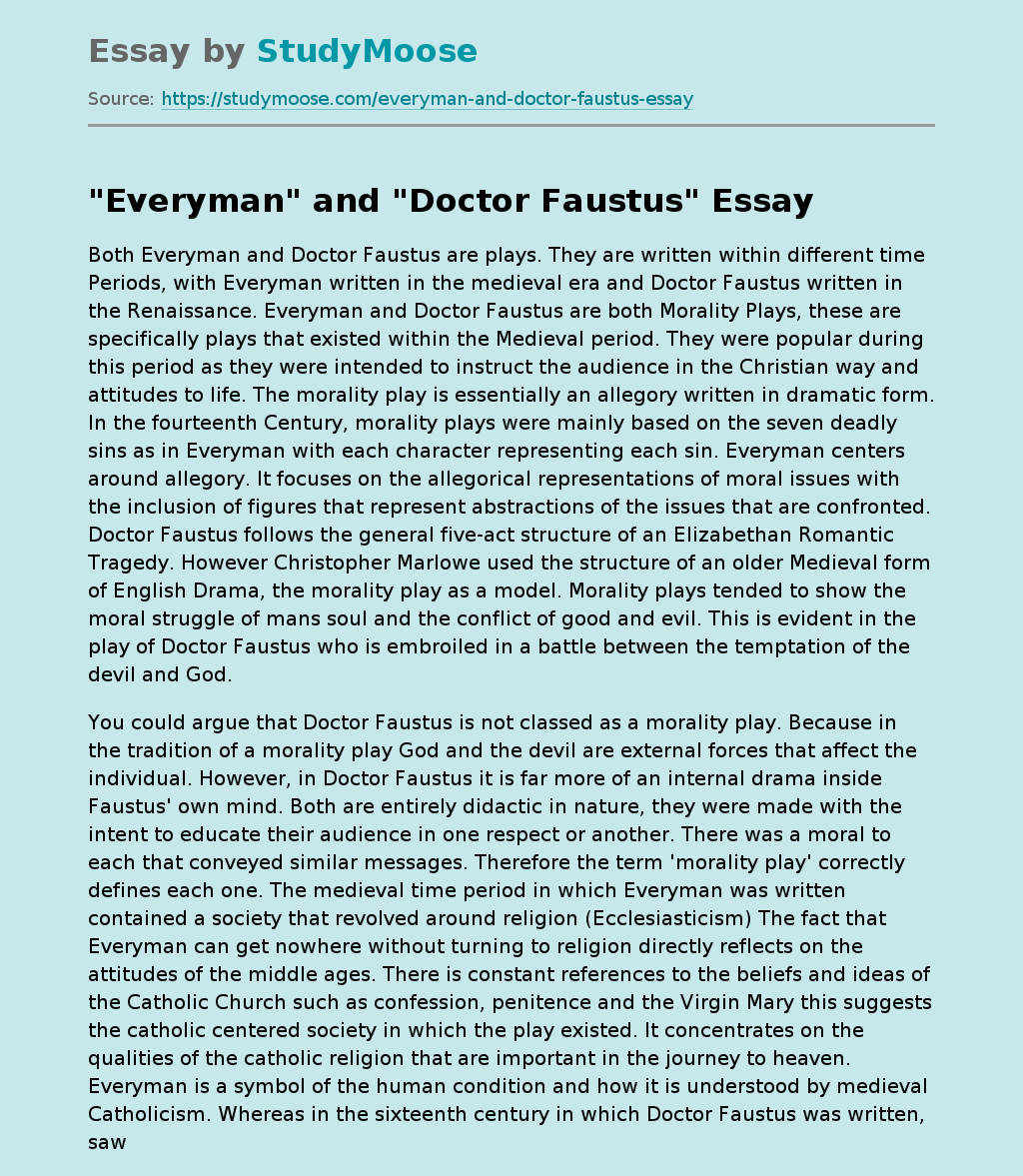