Every Kid Should Be Required to Take Gym

70% of children in the United States don’t meet the 60-minute daily exercise recommended goal says the CDC. Chances are that your child is one. The main cause of this problem is that once gym becomes an elective course, only 29% of kids end up taking it. This means that only 1% of kids in the us meet the exercise recommendations without the help of gym. This is only one subsection of the four most important reasons why kids should take gym: there are many health risks of not taking gym, you make friends during gym, you learn about possible sports interests, and activities so you can be active even as you get older.

Don't use plagiarized sources. Get your custom essay on
“ Every Kid Should Be Required to Take Gym ”
Get custom paper
NEW! smart matching with writer

It will also be explained why the few reasons you may think gym isn’t worth it is incorrect.

The first main problem of kids not taking gym is their health. According to doctors at Johnson & Johnson, 20.6% of 12-19 year olds are obese and another 17.2% are overweight. That statistic’s information shows that 37.

8% of our middle and high school students are above the healthy BMI for their height. Kids that start out with unhealthy lifestyles like these are more likely to grow up to be overweight, and unhealthy eaters. Another main health risk are heart diseases. A study done by Joy Dora of seattle PI newspaper shows that 56% of adults who have heart diseases in the U.S. didn’t take gym when it became an elective course.

Christopher Bopp Ph.D. from Penn State university also agrees with this study, by saying “Cardiovascular endurance is being built during Physical Education classes, and without a strong heart your body surely cannot function the human body isn’t functioning at it’s best”.

The CDC says that every 1 in 4 deaths in the U.S. were caused by a heart disease. If kids just took gym, or if it was required that number of yearly deaths in the U.S. would drop dramatically. Dr.James Norman of the prestigious science website, Healthline also says that you are at a higher risk of depression if you didn’t take gym in your youth. Those highly accredited experts all agree that many bad things can happen to your body if as a child you didn’t take gym, and you should agree with them too. But as well as bad things happening to you if, you don’t take gym, a lot of good things can happen if you do.

One of those good things is learning about activities that will help you be active as you grow older. In gym you learn about activities such as running, bowling, tennis,swimming, biking, walking, and pickleball, all of which the government’s better health initiative recommends that people over 45 do one or more of for a combination of 2.5 hours a week. They say that doing these things will help you save money on taxes, medical bills, and insurance. My great grandpa lived until the age of 95 by doing these things, and my grandparents in their 60’s are active and are in as good of a health condition as they were when my parents were kids, only going to the doctor for routine checkups. The better health initiative also recommends doing these activities with a friend or group to encourage continuing doing them, and you can make these friends through gym too.

As well as preventing health problems later in life and learning about things that you would be interested in doing to keep yourself healthy later in life, kids can make friends during gym that they wouldn’t otherwise. Because gym doesn’t have skill levels like ELA, science, and math, any group of kids that wouldn’t normally know each other can end up becoming friends. Play For Change and Science Daily have also both agreed that friendships are built when kids are on a team together better than when kids try to make friendships on their own. This works because it has been proven that people show their personality based on how they play sports, and that kids do the best job of reading those personalities that are being shown.

You can also talk to others while running, biking, lifting weights, or doing weight machines. That opportunity isn’t given in other classes, when the most socialization you do on a daily basis is occasional group work. Making friends in gym can also help push your kid or have your push other kids to do better in other classes, so that they can end up having other classes together in the future. Also If you make friends in gym with people who play sports that will be another motivator to start playing one.

The final main motivator for parents to get their kids to take gym is learning about possible sports interests. As mentioned before your kid might make friends with someone in gym and want to join a sport with them, but there are other ways gym can get you interested in a sport. One is by just playing games or sports with them in gym. According to Dr.James Norman “playing team sports builds leadership qualities and boosts your self esteem, and self health interests. This includes playing sports in gym, and if all of these good things are happening most kids will want to join a sports team. It has actually been proven by a study done by Science Daily that 67% of kids participating in sports learned about their interest in that sport through gym. Four of my current or past closest friends I either met during gym or from sports that I learned about from gym. Also if you make friends with someone in gym who is a higher or lower academic level than you, you can push each other academically so that you are able to be in the same classes together in future years other than gym. Other than that though, there is another direct correlation between physical activity and higher grades.

You may have been wondering if even though these are all strong reasons, there might be a negative reason that overrules them all. Some people think that academic courses are more important that gym, and those people do not have all of the facts. Yes, you don’t learn things the same way in gym that you do in other classes. Although as mentioned previously being physically active has been proven to raise grades. This is because, it has been proven that working out or playing sports relieves stress, gets oxygen flowing to your brain-which helps you focus-, and one other major reason. That other major reason is that it doesn’t matter if you have a higher IQ than Albert Einstein if you die from one of the many diseases mentioned previously that come with not taking gym.

That’s because you’ll either die earlier than most people or are in such bad condition that you can’t work your intelligence doesn’t really matter anymore. Other than the living longer aspect though, it has been shown that students that are in gym score higher on tests in other classes. Christopher Bopp Ph.D. says, “the more than 1,820 students who visit Purdue’s France A. Córdova Recreational Sports Center at least 16 times a month earned a GPA of 3.10 or higher.”. This shows that the more physically active you are, the higher grades you get, and with taking gym every other day, at a 5 days per week school you would get an average of 11-12 hours of physical activity per month, more if you do a sport. It has also been shown that lower stress means higher test scores. Now you can see that there is no bad side to making gym a required class, and it has a very strong good side.

As you have seen, the 4 most important reasons to make gym required are the things that could happen to your body without gym, that you learn about activities that can help you stay active later in life, you can make friends, and learn about sports you might want to try. It has also been shown that gym helps you get higher test scores in other classes too. Now, all you parents need to do to fix this issue of not having required gym is to bring up the issue at a district board meeting or PTO meeting, send emails to your state congresspeople, and while these major fixes are being worked on, you can make your kid take gym.

Also, you can get kids involved too by rewarding them for taking gym or telling other kids they should too. You can spread the word to other parents too, or start a petition. No matter what you do though, just make sure to be passionate about it or others won’t take you seriously. And you should be passionate about this, after all you want your kids to succeed as much as possible, and you want the best for them, and I can guarantee obesity, heart diseases, or depression are not what’s best for them.

Every Kid Should Be Required to Take Gym. (2021, Jun 26). Retrieved from https://studymoose.com/every-kid-should-be-required-to-take-gym-essay 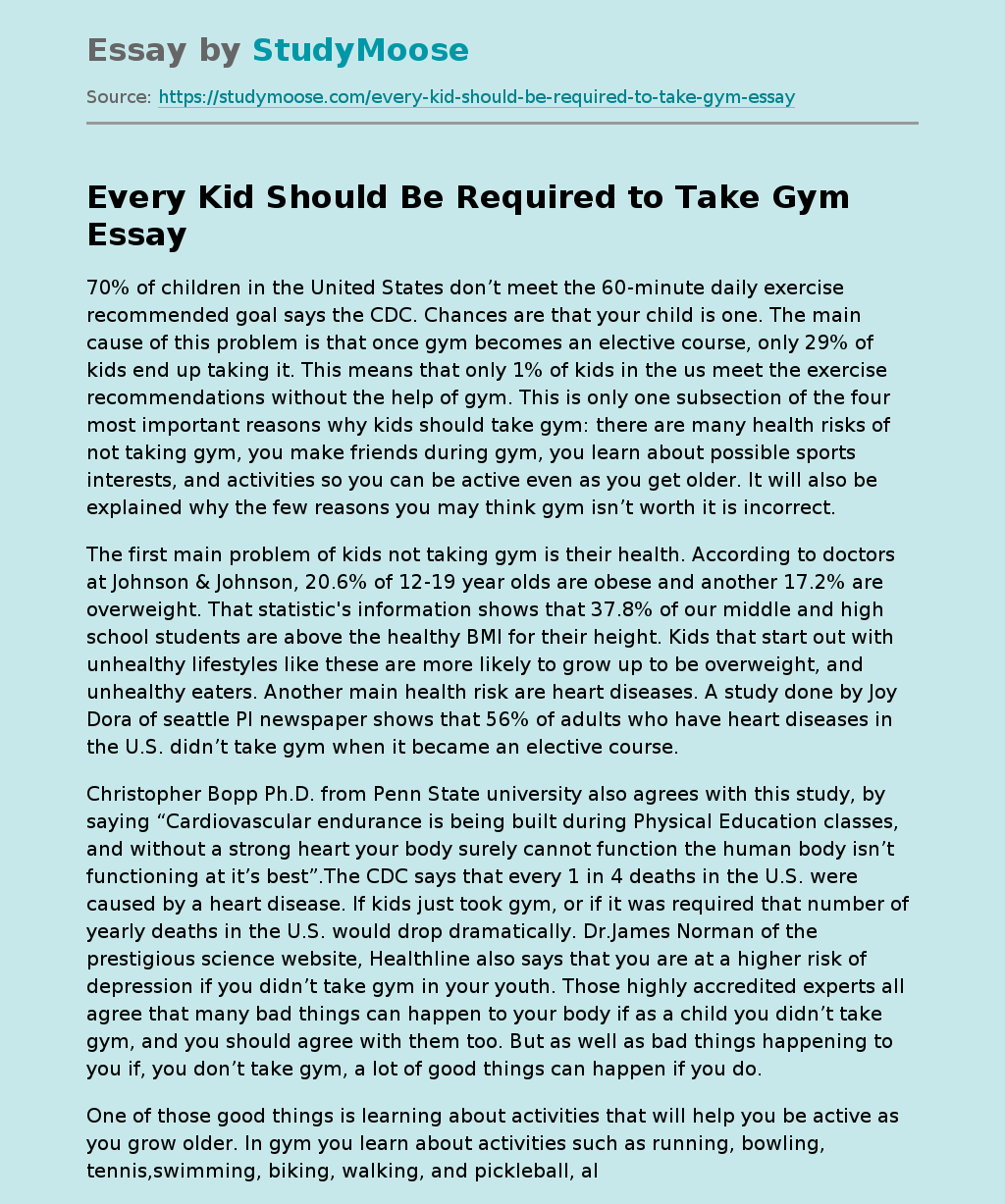