Every Child is Special (Film Analysis)

In the film Every Child Is Special, there are issues or problems shown that really happen in our society.

Don't use plagiarized sources. Get your custom essay on
“ Every Child is Special (Film Analysis) ”
Get custom paper
NEW! smart matching with writer

The first one is the family issue; there is something wrong when it comes to parenting style done by Mr. and Mrs. Awasthi that affected the child’s behavior. The father doesn’t have enough time to guide his son, he punished Ishaan when he got in trouble or when he is misbehaving but he never tried to find out the reason behind.

They did not really accepted Ishaan’s condition and did not give enough care for him. The other is the social issue; Discrimination, Ishaan’s classmates, teachers and others treated him differently just because he has difficulty in his studies and motor skills, they sometimes bully or even hurt him. They also discriminate children with disabilities by comparing their abilities with other kids. Child Labor, it is shown when Nikumbh was on his way to Ishaan’s house, he saw a little boy working.

But he mentioned that, “Putting your ambition to the child is worse than Child Labor”. The biggest issue that I’ve noticed in the film is the Education System. The way the other teachers teach their students, embarrassing the student in front of the class, beating, shouting, giving punishments when they can’t understand the lessons.

I really don’t think that those will help or discipline the students instead it may just lower their self-esteem, they might think those hurtful words are true, may take away their interest in studying and worse destroy their dreams. We all have different special abilities. If I were to be part of that film, I would like to be Nikumbh, the art teacher. I admire his great love for all the children especially with those who have special needs. He is the one who brought huge solution to the problem faced by Ishaan and tried so hard to help him learn and improve his artistic abilities. Nikumbh made Ishaan’s parents realize that he is not misbehaving, that he is not lazy, idiot or hopeless just like the other teachers said and that he needs to be accepted and treated well. He did it right because, he understand Ishaan more than any other. He brought back Ishaan’s interest in painting and supported him in the times that he almost gave up, telling him that even great people had encountered some difficulties before they achieve their accomplishments. The teacher provided the kid with much special attention, care and encouragement that resulted to the kid’s excellent improvement that surprises his parents and the whole school community. It would be a wonderful accomplishment for those people who can do what Sir Nikumbh did.

Every Child is Special (Film Analysis). (2016, Mar 13). Retrieved from https://studymoose.com/every-child-is-special-film-analysis-essay 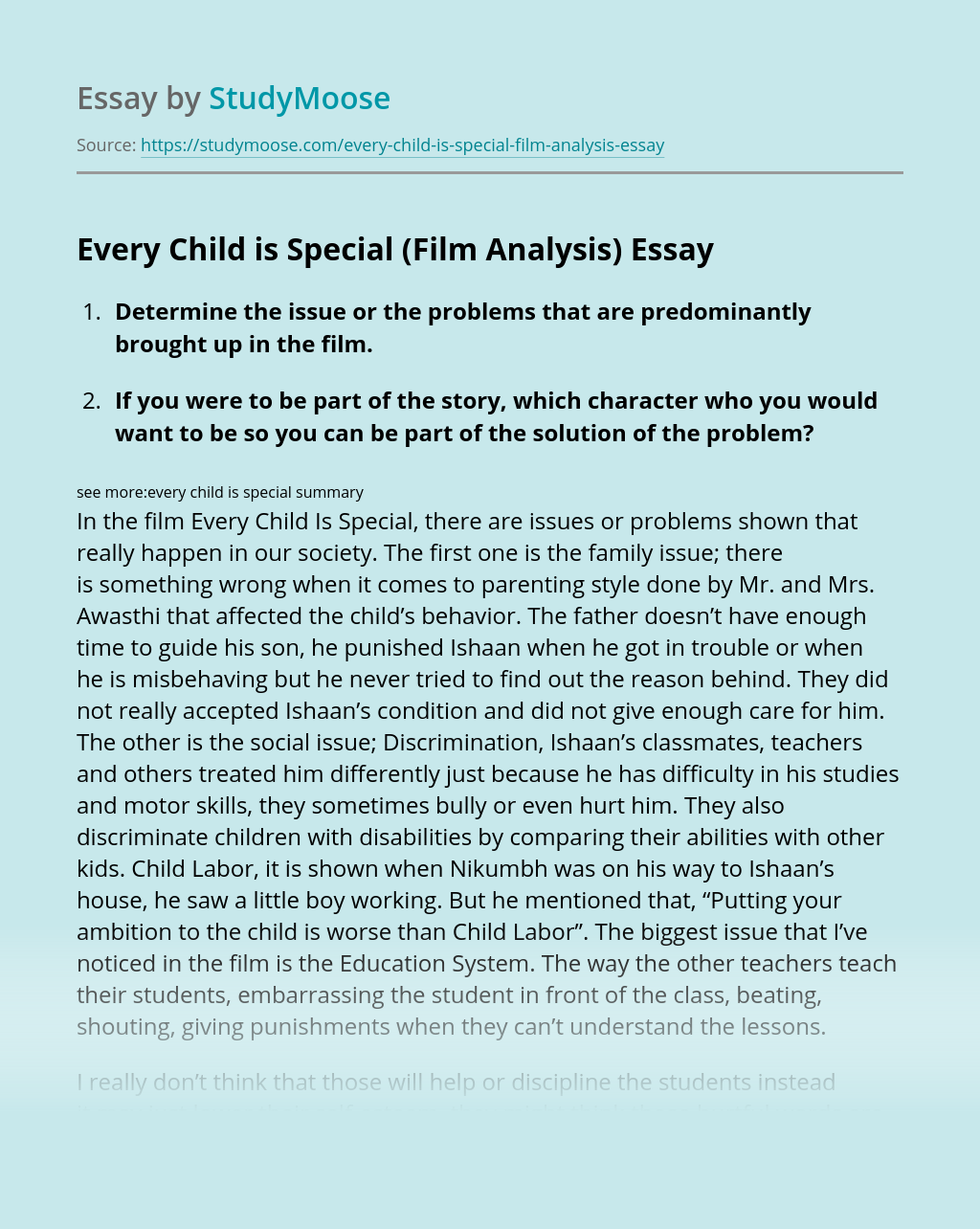