Evaluation Essay of “In Too Deep”

The essay “In Too Deep” written by Tom Ruprecht was structured similarly as most autobiography essays, and the author’s narrative has conformed to the “Dramatic Arc”. I am evaluating the essay in “Dramatic Arc” order and …标题 place people。The writer changed his mind and gained a lot through this travel. At the very beginning, the writer of the essay Tom explained the background of the story: the inciting incident happened on the group trip to Hawaii. Tom used a special technique to arouse the audience’s curiosity: there are two negative phrases “impossible” and “instead of” in the beginning of the essay.

Don't use plagiarized sources. Get your custom essay on
“ Evaluation Essay of “In Too Deep” ”
Get custom paper
NEW! smart matching with writer

Also, Tom repeated several times “kindergartners” and “uncool” to express the feelings of unhappiness of being treated like a child and felt hostile towards the guide, which has a strong contrast to the feeling of satisfaction with the “little kindergartner” in the end of the essay. When describing the guide, Tom also compared the guide with himself: a “rugged and handsome” guide vs.

a “kindergartner”. His wife was in the tour group too, so Tom thought he lost face.

Droven by those complex emotions, Tom asked to get into the cave although he was not interested in it at all at first. At this time, the spelunker Ernie appeared in the story. Through the phrase “I politely declined, he insisted” implied the frustrating and unpleasant dialogues in the paragraphs that followed. In addition, Tom mentioned that it was his father’s story and words that encouraged him to agree the proposal.

We can see that his father has a great influence on him. 加 indicate name comparison等形式化东西进去 Then move to the “Rising” part of the “Dramatic Arc”. Tom and Ernie entered into the cave. Tom added a lot of action verbs to show the big difference between them. On the one hand, Tom “began” to ask to head back, on the other hand, Ernie just “simply rushed ahead”. “Slither through”, “panicked”, and “began looking around” those verbs directly describe how Tom could not hide his scared emotions. When I read this part first time, I could know that every one-foot deeper, more fear came into Tom.

Next, Tom presented that Ernie is an unprofessional and unreliable person, which made him feel even more dangerous. There were some details: he could not figure out what substance was on the cave’s roof, and his unprofessional behavior. Next, it is the climax part. Ernie turned off the flashlight and asked the earthquake question in a joking way. Finally, Tom could not stand Ernie any longer, and decided he had to get out of the cave. Here, the extremely terrifying atmosphere was created by Ernie’s words. Although Ernie asked several questions, Tom did not give any vocal response but to describe his own facial expression and his decision to get out. There are not many describing sentences, but we can imagine the temporal unusual air. Then it is time to get back. Unfortunately, they lost their way and they chose the wrong way that had been picked by Tom. In the sentence, “Ernie, the great spelunker, replied: ‘ Oh, I have a terrible sense of direction.’ ”

I think that Tom especially repeated “ the great spelunker” to convey his complaints about his disappointing teammate. Also, the sentence “Eventually Ernie’s spelunking expertise did kick in” to show Ernie realized the wrong way. The spelunker was just like a soul who was absent all the time and finally appeared. I think this sentence was really successful, because it made Ernie vivid and humorous. The last part is the “resolution”. Tom and Ernie finally got out of the cave. Tom used the comparison again: the verb “popped” and “expect” show his happiness first but the reality was totally adverse. The annoyed group mates standing at the entrance to the cave were really mad at them. The most interesting thing is that the plot reversed again.

The handsome guide criticized them in public first, however, he showed his admiration in private, which satisfied Tom’s self-pride to a great extent. Comparing the different attitudes between the beginning and the end, we can explore that the writer changed his mind. He challenged himself to explore the cave, and after this adventure, he felt better about himself and became more confident. He thought he was also a cool and brave man in front of his wife, which is very important to him. The writer Tom was good at describing the atmosphere and dealing with the details, and the atmosphere and details really impressed me. Also, every process of the incident was connected closely, and all of the peoples’ actions had powerful motivations. All in all, I think it is a really successful autobiography essay.

Evaluation Essay of “In Too Deep”. (2016, Sep 01). Retrieved from https://studymoose.com/evaluation-essay-of-in-too-deep-essay 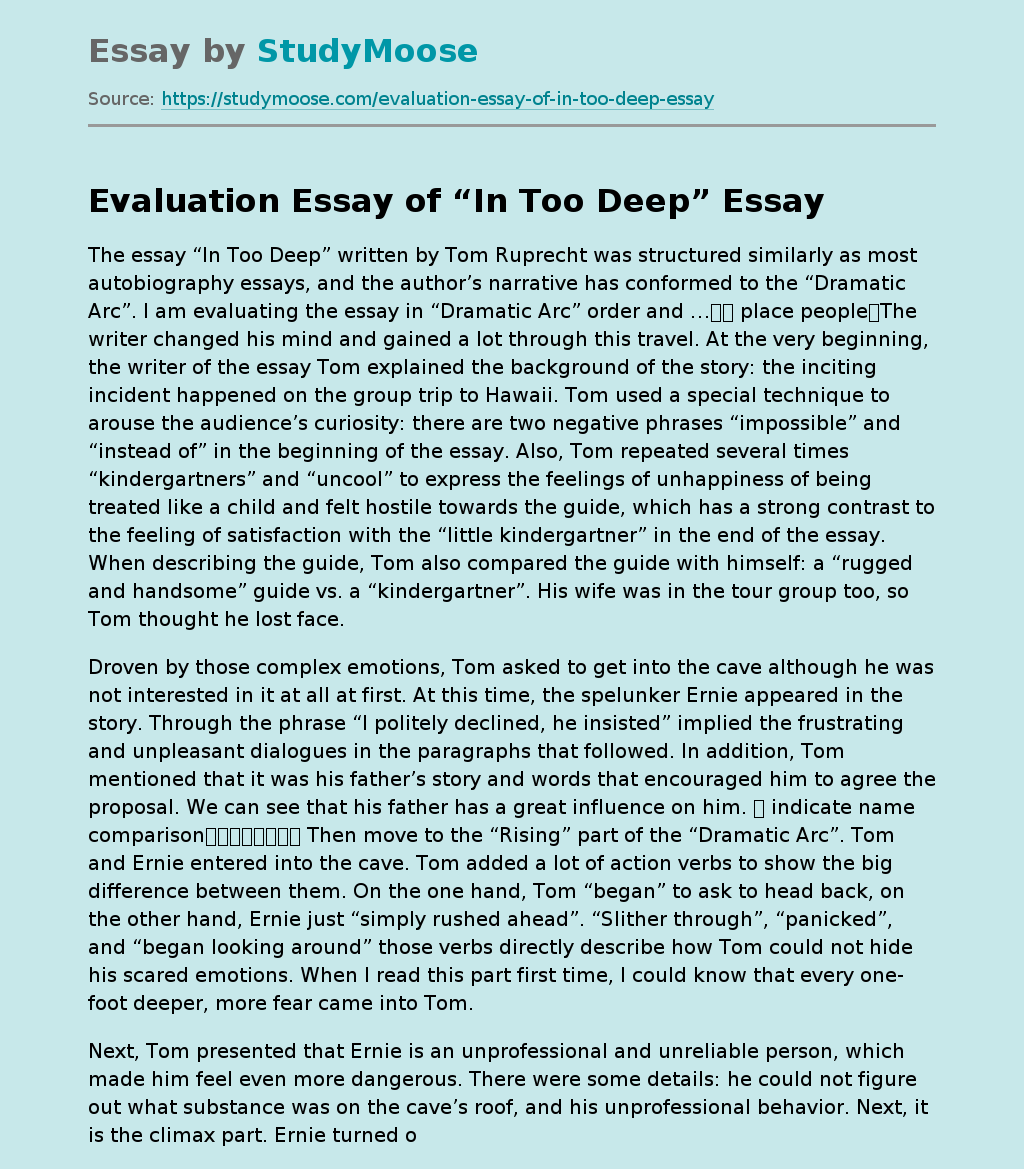