In the 1950’s, a series of experiments were performed by psychologist Solomon Asch on the effects peer pressure can have on someone that would otherwise be stalwart in their judgment. In the experiment, a group of young men were shown a line with three other lines of various lengths next to it, and asked to determine which of three lines matched the length of the first line. There was, however, a catch: all but one of the men were confederates (or associates) of the study.

Don't use plagiarized sources. Get your custom essay on
“ Evaluating Peer Pressure in the Asch Experiment ”
Get custom paper
NEW! smart matching with writer

The last man was ignorant of this fact and was the actual subject of the experiment. Initially, the men would all answer correctly to prevent rising suspicion in the subject. After one or two correct answers, the other men would then start answering unanimously wrong. Under opposing group consensus, it was observed that the subject would often ignore their own perception of the line in favor of the group’s opinion.

There are many conclusions that could be drawn from this study.

Perhaps the most immediate one would be the alarming influence that peer pressure can have, consciously or subconsciously, on our daily decisions. Though there is no parallel to this experiment in a realistic situation, it is hard to deny the effect other people’s opinions can have on our own. In my youth I was highly impressionable to the opinions of my group of friends, even if their opinions or actions were of a stark contrast to my inner values. I could romanticize my childhood and tell myself that I was simply exploring new avenues of thought, but more than likely it was simply because I wished to avoid conflict.

Nobody wants to lose a friend in argument over something as trivial as the best Saturday morning cartoon show (which, keep in mind, is a perfectly possible scenario in grade school).

This brings me to my main concern with Asch’s study; that the demographic used the experiment was extremely limited. The subjects were always young males that likely lacked the experience or resolve to hold their own against what they perceived to be wrong. If the subjects were older men, they would probably have been less swayed by and maybe even jaded to multiple people disagreeing with them. Even setting aside the factor of age and social experience, one can only wonder as to what the results would have been like if the experiment were done with a selection of women, or mixed genders. While Asch’s experiment has many facets of it that hold true in everyday life, I find that the limited scope of the study’s participants takes away some of its credibility. 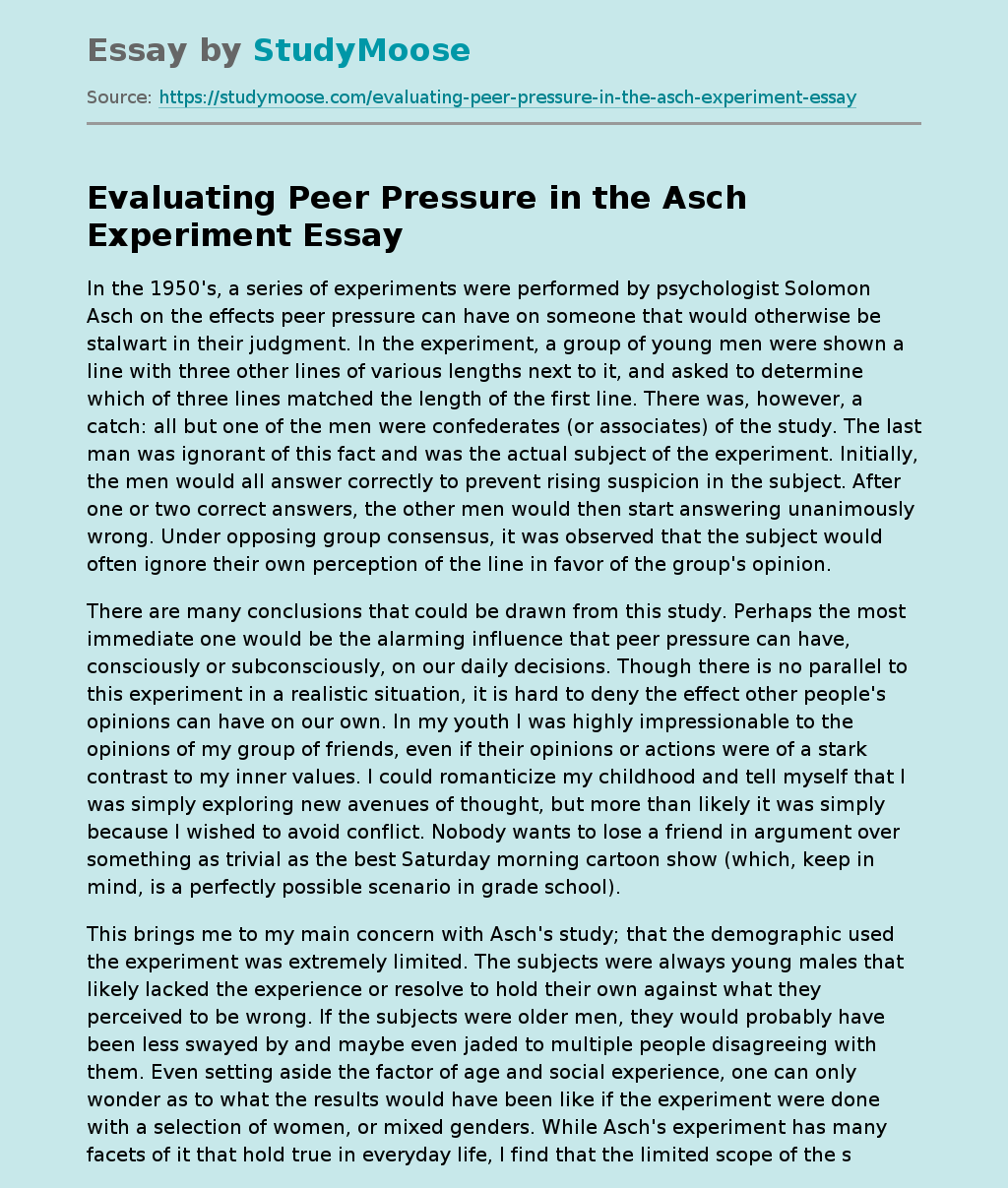