Evaluate the Information Processing Models to Learning, Distingush the Main Features of the Multi-Store Model

The main thrust of this assertion is to give an evaluation of the information processing models to learning and paying particular attention to features of the multi-store model. According to Ashcraft (1994) information processing model is a framework used by cognitive psychologists to explain and describe mental processes. The multi-stores model propounded by Atkinson and Shiffrin(1968) is a classic model of memory, which describes memory in terms of information flowing through a system. However the model is not without flaws, as it possesses weaknesses as show be critically analyzed in this evaluation.

Don't use plagiarized sources. Get your custom essay on
“ Evaluate the Information Processing Models to Learning, Distingush the Main Features of the Multi-Store Model ”
Get custom paper
NEW! smart matching with writer

These are raw facts and figures that we capture from the surrounding using our senses. A stimulus can move from our senses to the short register, when we pay attention to the stimulus, and thus our internal process begins. According to Baron (2001)learning becomes the process of commuting our symbolic representations to memory where there may be processed and the study of learning is primarily through the study of memory The multi-store model is a classical model of memory which was suggest that memory is made up of a series or stores and information is processed and stored in three stages namely sensory, short term and long term memory.

Atkinson and Shiffrin (1968) describes memory in terms of flowing through a system. Information enters the sensory memory through detection environmental stimuli by the sense organs, then through the process of ‘attention’ and ‘perception’ moves to the short-term memory. Through rehearsal the information may be transferred to long term memory, and if not rehearsed it is then lost from short-term through the process of displacement or decayMcLeod,2007)

Sensory memory is a brief store of information from the environment,maintaining a duration of a quarter to half of a second(Fieldman,2010) The sensory register picks up all the environmentalstimuli reaching our senses.The capacity of th sensory memory is quite large,although it only lasts for milliseconds, as it holdsinformation associated with the senses.If our working memory is relatively free of work,we might pay attention to the new input and if not, then we would not notice or we quickly forget the new information(Baddeley and Hitch,(1974).

The other main feature of this model is the short-term memory,which is a temporary store for a limited amount of information and stores from a duration of 0 to 18 seconds,(Fieldman,2010). In this storage information is encoded mainly as echoic. Baron, (2001) postulates that short-term memory can handle about 7 objects at once, but this can be improved by chunking, which is the grouping of items into chunks and this information can be maintained by rehearsal or association of the information you are trying to remember with already existing knowledge.Therefore the short-term memory becomes vital as this is where consciousness exists and thinking is done.

Long term memory is the third main feature of the model,which represents our permanent storehouse of information,and its capacity is unlimited(Ashcraft,1994). There are three categories of long term memory, semantic(for verbal information and meaning), episodic memory(for events) and procedural memory for how to do things. The prospect of information reaching the long term memory according to Driscoll(1994) depends upon the length of the message and familiarity of it with information already stored.

The major strength of this model is based on its ability to set a foundation on other studies as memory studies provide evidence to support the distinction between short term and long time. Mcleod (2007) posits that the model is influential as it has generated a lot of research into memory. Furthermore, studies of amnesiacs also supported the essential of this model. This show the relevancy of the information processing model to
learning as it is consistant with empirical findings and provides an excellent framework for understanding the principles of effective learning.

The information processing model is also blamed for over simplifying facts and does not account for the type of information processed. The working memory is treated as a simple store of memory. This view is contradicted by Baddeley’s(2001) model of working memory which consists of three components, theexecutory loop, and visual spacial sketchpad,with uses which vary from selecting incoming information, determine processing and constructing meaning through inferences and subsequently transfer the processed information to long term or delete it from the memory system altogether.Therefore,despite that, the information processing model provides a conceptual model which explains the different functions and constrains on human memory it fails to recognize that the short term memory and long term are more complex than previously assumed.

The interactions between short-term memory and long term memory were under emphasized and do not distinguish between levels in the long term memory,and of essence does not explain how the long term influences short term and sensory memory. Mcleod (2007) viewed the model as a one way or linear with rigid ways of operation, and also argues that rehearsal is too simple to account for the transfer of information. Schraw (2001) articulated that several useful terms have been developed to elaboratecognitive processing especially in working memory, for example the limited cognitive resources and attention resources, which help explain why there are differences between one learner and another.Therefore these and the fact that it is just a model and there is not really a way to prove its true, contributes to the view point that the information processing model has significant.

In conclusion, the information processing model gives the three vital stages of information processing, which are greatly regarded in most recent studies as they have provided a framework for understanding principles of effective learning. Therefore despite the great number of flaws the model is quite significant.

Evaluate the Information Processing Models to Learning, Distingush the Main Features of the Multi-Store Model. (2016, Mar 30). Retrieved from https://studymoose.com/evaluate-the-information-processing-models-to-learning-distingush-the-main-features-of-the-multi-store-model-essay 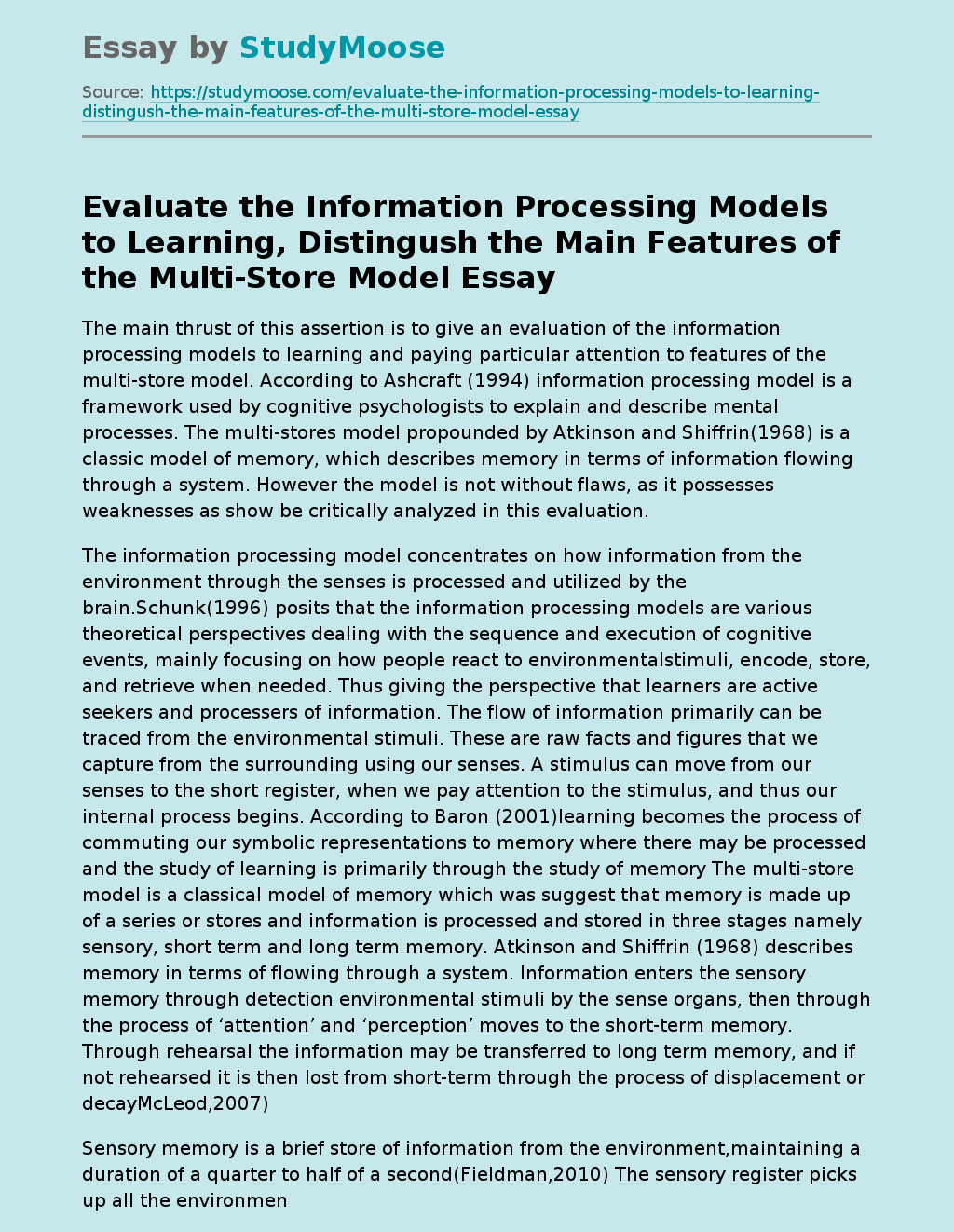