“An Inspector Calls” was written by J. B. Priestley in 1945, but set in 1912. I believe that Priestley set the play in that year to prove his philosophy and show his purpose on writing this play. Because of that, I will study briefly the historical background of the early 20th century, which is very important for the understanding of the play. It is set in 1912, when no war was envisaged by men, when the higher society was complacent, proud of themselves, and more important, prejudice in a way that the 21st century doesn’t know anymore.

Don't use plagiarized sources. Get your custom essay on
“ Eva Smith “An Inspector Calls” ”
Get custom paper
NEW! smart matching with writer

Two years later, a war started, six years later the general strike happened, eight years later, women got the right to vote, and even eleven years later another war began. The attitude of youngsters of 1912 and this chain of events started to build up today’s society, which has a lot less prejudice than the early 20th century’s society. Priestley’s main objective on setting the play in 1912 is to show how people regard to each other’s life, especially when they think is nothing to do with them.

He believed that “We are members of one body”, and “We are responsible for each other.

” The play starts with the whole family having a ‘nice little dinner’, celebrating Sheila’s engagement with Gerald Croft, who later gives her an engagement ring, which gets her very excited: “… Look – Mummy – isn’t it a beauty? “, and that is when she begins to show her personality. At the beginning of Act 1, Sheila is a very different person from the character at the end of Act 3.

She has just got engaged to Gerald, and is very excited about her future. She can only think of herself, and has no other worries.

Sheila is very inexperienced and doesn’t think that anything could possibly go wrong. When Gerald gives her the engagement ring, she says, “I’ll never let it out of my sight for an instant. ” What she doesn’t even think about there, is something that could ruin with all the plans, even less that in only a few hours she will be giving the ring back to Gerald. Her whole outlook on life is very positive. Everything is always perfect for her, and she has never had to suffer hardships. She is somewhat spoiled and expects everything to go right for her.

Again, when Gerald is giving the ring to Sheila, she says, “Is it the one you wanted me to have? ” She even knows the ring will be exactly as it was planned. Because Sheila has always lived this way, she tends to be ‘thoughtless’. This is not because she intends to be unpleasant to other people; she simple does not think about the world around her, and that others may not have life as easy as she does. This is exactly what happens when she gets Eva Smith sacked from Milward’s. She has been protected from the ‘real world’ by her parents.

But in the same way that she was protected from the world outside her family, her mother doesn’t live in the real world either, they are all living in some kind of ’empire’ that they created but doesn’t really exists and its all result of their arrogance and ignorance. When she enters the room after the inspector has arrived, she doesn’t know he is there. She acts surprised to see him, and says, “Oh – sorry. I didn’t know. ” She asks what the Inspector is doing there, saying, “What’s all this about? ” She does not expect it to be anything either very unpleasant, or anything involving her. When Mr.

Birling says, “Nothing to do with you, Sheila. Run along. ” It shows that he is trying to protect her from having anything to do with the situation. It seems that Sheila is protected a lot from unpleasant things like this, and has always been. The Inspector tells Sheila what has happened, and she is shocked. She says, “Oh, how terrible” – In an interested way she asks, “Was it an accident? ” It is obvious the news has upset Sheila, because the stage directions in front of what she says are “rather distressed”. This shows that she is sensitive, as at that point she doesn’t even realize she knows this girl. 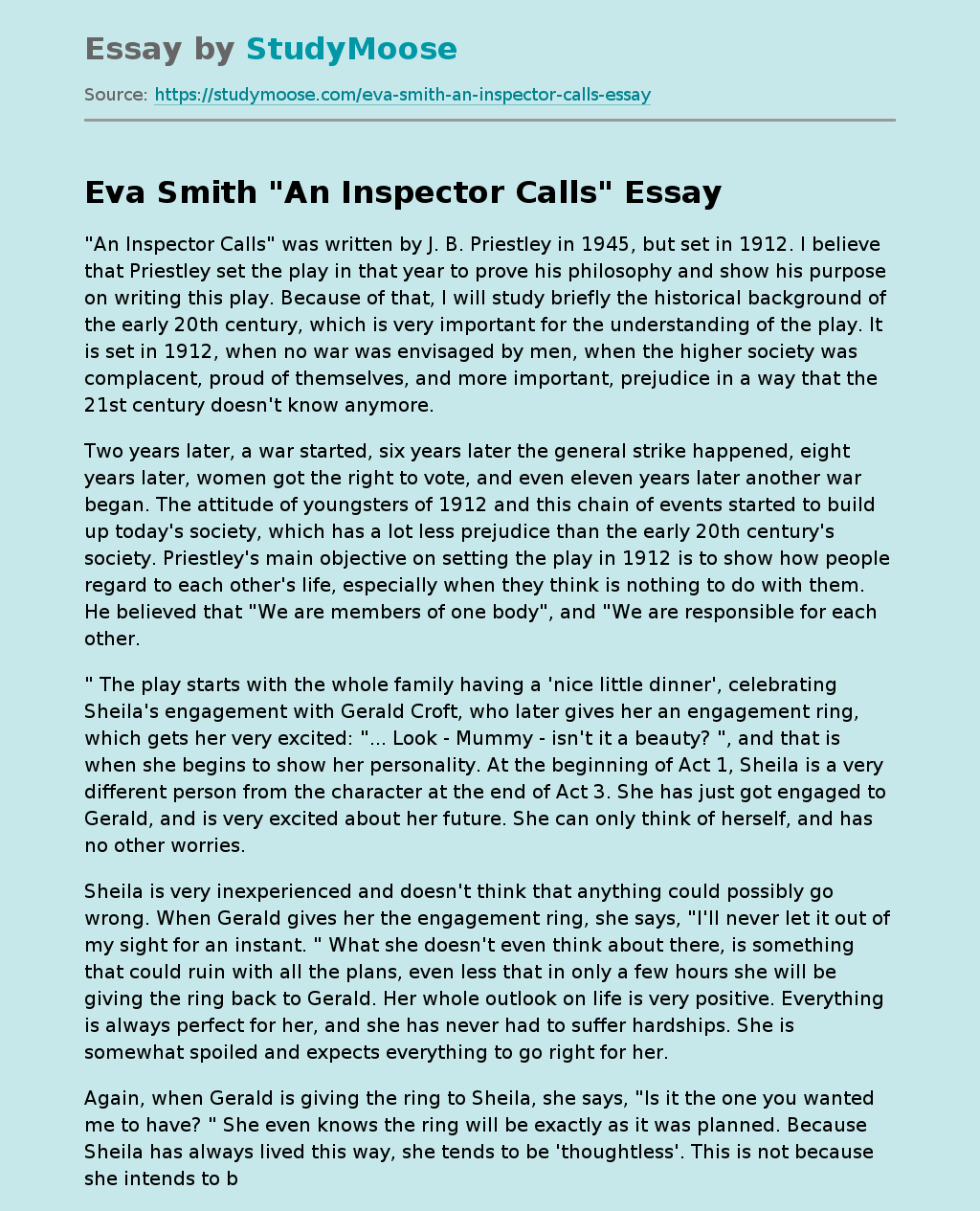