The most important point of having a good healthy financial is to keep the debt below the capital that country or individual have; by trying not to spend more of the funds that the country has or individual can repay back. According to Amadeo (2018) for a company that have difficulty to repay a debt is called business debt. When this happen it can become very expensive for the company to get new loans since the new investment will not have confident that it will be able to repay back.

A Sovereign debt is when a company cannot pay back the interest in the load. First, there is no court (International bankruptcy) that investors can go to for reasonable settlement. Second, a debt is not guaranteed by any protection; it is similar to credit card debt. Third, most country will print money to pay off its balance. Printing too much money it will be a problem because it will make the situation worse.

An example of this is Greek financial crisis according to Amadeo (2018).

The European debt crisis was a point when many countries when through a financial period that they were not able to paid their debt. It begun in 2008 with the failure of Iceland’s banking system and it showed mainly in Portugal, Spain, Italy and Greece in 2009. The debt crisis was the cause that European businesses and economies loss the confidence of other countries that will be planning to invest in their businesses according to Kenton (2018). There were many regulations that the European crisis would have to followed.

Many countries were afraid by the financial corruption that was happening. There was some reducing done by rating agencies such as Greek’s debt was moved from misused status. There were many bailouts. Many countries received funds that have requirements that slowdown the growth of public-sector according to Kenton (2018).

The Greek financial crisis started due to the lack of good maintenance of their financial. There were many wasteful and excessive spending of the government’s fiscal. In 1981, when Greece was number 10th member of the European Community. Greece’s economy and finances were in good standards. Greece’s debt-to-GDP ratio was 28% and its budge’s deficit was below the 3% pf GDP. But the situation was getting worse as year past by according to Picardo (2018). Examples of how the Greece’s situation got worse was the limited of its excessive spending; the salaries were high in the public sectors and there were automatic increases every year without reasons such as performance or productivity. A Greek man was able to retired with a pension as early as 50. Other examples, employees were entitled to have additional month’s pay in December to help with the holiday expenditure and also they were to received one-half month’s pay at Easter and one half when they went in vacation according to Picardo (2018).

To be able to measure the impact of the different situation that will change the finance of a country, it is necessary to have accrued data. According to Ellis (2018) it is necessary to have accrued data about the assets so GDP (Gross domestic product) have a scaling factor. This scaling factor will have some limitations because GDP is subjected to endless revision over time by statistical agencies. These limitations are recognized by different agencies such as International Monetary Funds (IMF). For this reason, other economic and fiscal data measure were introduced. According to Ellis (2018), “the Greek debt ratio was 68% at the end of 2013 but Kazarian (2017), the founder and CEO of Japonica Partners showed data that was estimated from mid-2017 that stated that Greek debt should be recorded as 75% of GDF.” Results are accrued as the data received so having different data from different sources it will give different results.

Many countries were not able to repay or refinance their debt or help their struggling banks without the help of other financial agencies such as the European Central Bank, the International Monetary fund and the European Financial Stability Facility. According Kenton many countries voted to created EFSF in 2010 which it will concentrated and help the European debt crisis. In 2009 Greece showed that previously government had totally underreported its budget deficit, which is a violation of EU policy and causing doubts of a euro failure via political and financial malpractice.

According to Selcuk & Yilmaz (2011), The Global crisis on the world economy was showing negative signals that will impact how countries will be view and how investors will make careful decisions with which countries they will invest. Greece, Italy, Portugal and Spain were the firsts countries showing the negative effects of the global crisis. This was the biggest financial crisis since the EU took the euro as single exchange and Greece participation in the Euro Region in 2001.

There were many concerns about self-governing default helped will result in higher interest rate resulting in a more deep deficits; the interest rate will grew, investors will not have confidence to invest with these countries because they will be afraid that they will not be able to pay back. When this started happening there were political battles going on with different countries. Many countries argued that countries needed to be bailed out, while other claimed that bailout could only come if the countries to fall on a more serious fiscal reform according to Investopedia (2018).

According to Kenton (2018), the stages of the development of the impact were showing on the sovereign bond yields between the affected marginal members Greece, Ireland, Spain and they were showed more in Germany. The Greek yield according to Kenton (2010) deviated in early 2010 with Greece needing Eurozone assistance by May 2010. Many bailouts were received over many years in exchange for the acceptance of the EU-mandated which came with severe measures to cut public spending and a significant increase in taxes. The Greece’s economic recession continued and June 2015 with the division political and fiscal leadership facing absolute default.

For many months the people from Greece, they were not happy with the bailout. They were against it and the strict measurement that came with it. Changes are easy for people to accept even though it will be beneficial at the end. Removing a country from the EMI is exceptional and considering the effects on the economy of that country is disturbing, especially when using Drachma which will fluctuated from total economic failure to a surprising recovery. Greece was having a high unemployment rate about 21 percent in 2018 and had a reduction in GDP as of 2016 according to Kenton (2018).

As result of the low production, not be able to be competitive as other countries and have extensive tax evasion the government did not have any other option but to have massive debt to keep the country going. For Greece was easy to borrow because they were member of the Eurozone since 2001. Because of this membership Greece’s bond yields and interest rate declined suddenly according to Picardo (2018).

“Picardo (2018) explained, that the government suggested a jumped from than 600 basis points in 1998 to about 50 basis points in 2001 for the income ranged between 10-year Greek and German which resulted in Greece’s economy growing, with a real GDP growth average from 3.9 per year between 2001 and 2008; this was second fastest increase after Ireland in the Eurozone. This grown came at a very risky price which increase the debt and the interest rate of the debt load. An example of Greece’s debt-to-GDP ratio was at 103% in 2000 which this was above the Eurozone’s maximum which is 60%. Greece’s fiscal deficit was 3.7% in 2000 as a proportion of GDP was above the Eurozone’s limit of 3%.”

As a conclusion, the Global financial crisis were considered the worth global economic crisis since the Great Depression. The Global financial crisis in was in 2007-2009 according to Ross(2016). This situation started when countries were not able to pay back their debts because they borrow too much. They find themselves without credit markets and then they were not able find buyers for their bonds that they will be willing to buy them. A fiscal crisis is when a major credit rating agency demoted a debt or when a federal government has to suspend payment due to a budget deficit. This will create a situation which a country will need help and many investors will not have the confidence to invest money in their country. An example of this is what happen in Europe in 2010 which create a fiscal crisis not a financial crisis as Ross (2016) explained. For many countries they got into a difficult situation because they spend more than their resources. To have healthy financial situation it is important to keep your debt below your capital. The effect of the global financial crisis was deeper and more destructed in some countries. For example, Greece economic had high debt level, high budget deficit, very low productivity and unbalanced political structure which contribute to their financial crisis. This happen because Greece had bad decision made by their government such as political, economic and deceiving decisions. According to O’Brien (2018), the global crisis was and still one the most disastrous situation. The impact from this moved from financial into the real economy, the socio-economic cost which was difficult for these countries to recovered. 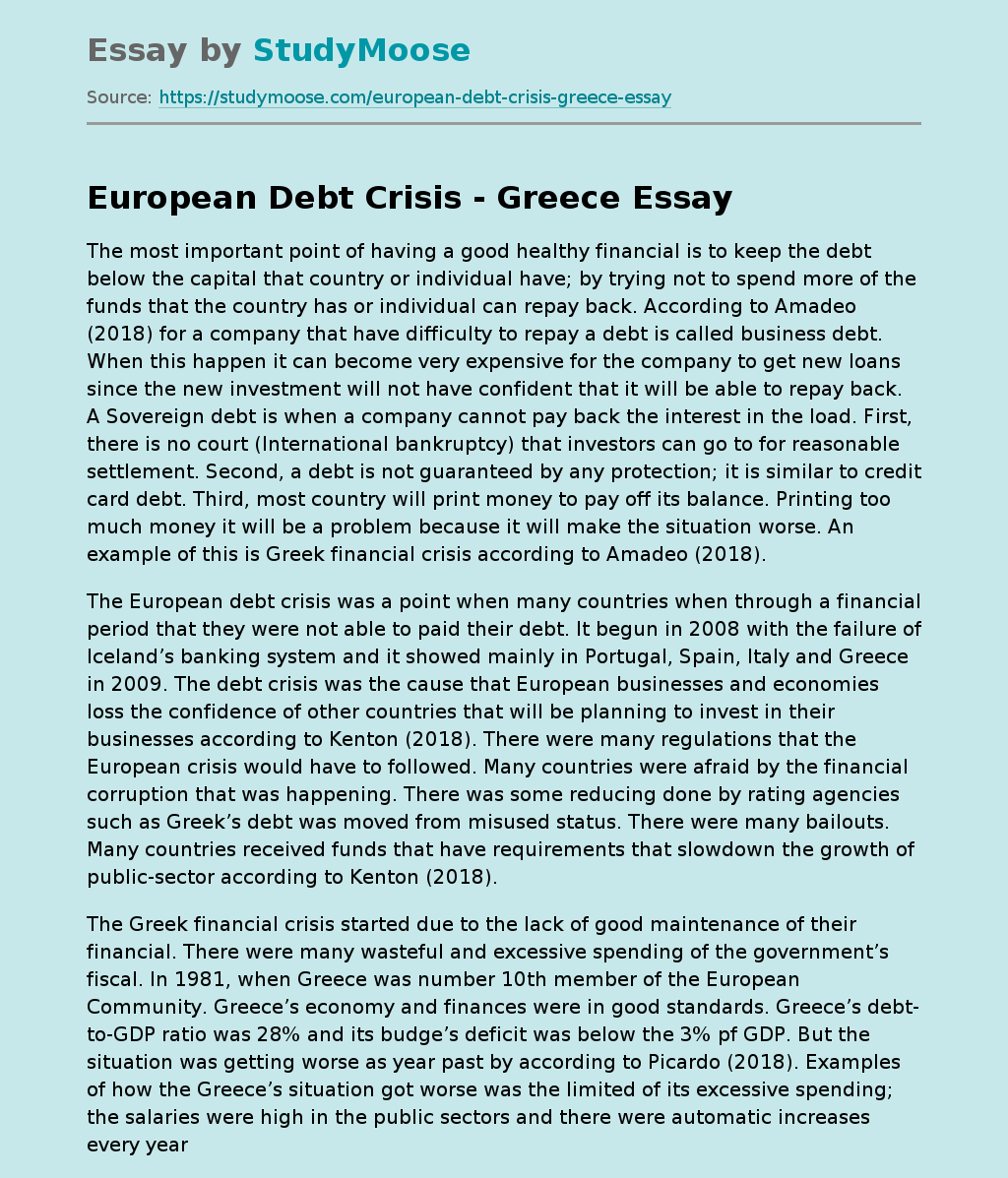