Throughout history, many changes have happened throughout the world. These changes shaped the world to be what is it was and also lead to other changes. For example, advances in technology, such as the creation of the magnetic compass, drastically changed exploration. However, these changes these changes did not occur without continuities. Take the bow for example, whether being used to hunt, wield in battled, or just to showcase skill, man has been using the bow for decades since the first bows were crafted.

Turn in your highest-quality paper
Get a qualified writer to help you with
“ Europe Africa And The Americas In 1492 To 1750 ”
Get high-quality paper
NEW! AI matching with writer

The years of 1492 to 1750 was a period of great change in Western Europe, Africa, and the Americas that resulted in changes in economy, like the introductions of new trade routes, along with changes in society such as changes in demography, which were especially relevant in the Americas. With all of these changes also existed continuities such as, in terms of economic continuities, the rich were still employing slave labor in order to produce materials for trade and desire of the Spanish to convert people to Christianity in regards to social remained.

In the years of 1492 through 1750, many questionable choices and things occurred due to the use of new trade routes that both furthered and damaged the economy in different regions of the world, mainly Western Europe. The triangle trade was one of the most notable of these trade routes considering that it lead to so many things that affected the world because it was a trade route that connected Europe to Africa to the Americas. This trade route would be a major cause of economic change on the world because of its use to trade slaves, raw material produced in the Americas by those slaves, and along with silver from the mines of the Americas which were shipped to Western Europe.

The silver at first was an undeniable positive for Western Europe much like the export of raw materials from the colonies in the Americas. This export of materials was a great advantage to the mother countries because it means the mother countries could dedicate their land and time to other issues. Furthermore this leaves having to import theses raw materials from other countries thus giving the other counties more money which in turn gives them more power, having to pay taxes to trade route controllers, and it cuts out and political disputes that had a chance of occurring. The trade of silver on the other hand was far more controversial.

At first it was a big boom to Spain’s economy because of how valued silver was at this time. However, that all changed when the value of silver drastically dropped due to inflation. This caused Spain economic problems because it gave them a false sense of security when they spent money fighting too many wars, money that they would no longer have. Both of the silver and raw material shipped to Western Europe from the America was mined and produced by slaves sold by Africa to the Europeans which lead to growth in Africa’s economy but a drop in its population and the way of life of Africans.

Along with the arrival of the Europeans on the Americas, the trade of these slaves itself, caused changes in Europe, Africa, and the Americas. Of course Europe benefited economically but more prevalently was its effect on the demography of both the Americas and Africa. The America’s culture and population were two main effects of the trade of slaves. With the decreasing population and life expectancy of the natives of the Americas thanks to the diseases brought by the Europeans because they had no immunity, the trade of slaves slowed the rate a small amount because coming from Africa they already have some immunity to disease.

The African slaves crossbred with the Europeans as well as the natives which led to the diversification of the population. This introduced creoles and mestizos social classes caused differences in the social ladder with europeos at the top, under them were the creoles, below the were the mestizos, next the Native Americans, then the free blacks, and the slaves at the bottom. In Africa the way of life and population was drastically changed due to slave trappers and traders. Families were ripped apart and the population was decreasing as Africans were being sold as slaves to the Europeans

Slavery traces as far back as Ancient Greece and as continued all the way up to, and through the years of 1492 and 1750. They were still used for chores and for hard labor because they were cheap and replaceable. Rights and conditions of the slaves also did not change; they had no freedom, no rights, and no say, because they were still considered property by the Spanish and Portuguese. The Spanish and Portuguese bought and used slaves in fields and mines of the Americas with the majority of the slaves going to Brazil, a Portuguese colony. They used slaves rather than hiring workers or doing the work themselves because for the same reason the Ancient Greek did it; it was cheap, easy, and they were replaceable. Slave labor continued throughout these years and even continued on past the year 1750.

Another continuity of the years of 1492 and 1750 was the Spanish’s desire to convert the “barbaric” natives of the Americas to “proper” men of the Christian Faith. Some welcomed Christianity while some rejected it due to their comfort and contentment with their own religion and beliefs. The natives had previously practiced a polytheistic with human sacrifices, cannibalism, and rituals which was savage and barbaric to the Spanish. This caused the Spanish to forcibly convert the natives to Christianity with disregard of what the natives wanted. This was done by taking people including children from the Americas away and teaching them the ways of Christianity and sending them back to spread those ideas to others.

The years of 1492 to 1750 held some big changes economically and socially to Western Europe, Africa, and the Americas. Economically, all three benefited excluding Western Europe when the inflation of silver hit. Socially, the demography of Africa was altered and the Americas drastically. Yet, not everything changed during this time period. Much of history remained constant during the period too. This included the use of slave labor in regards to economics and the Spanish desire to spread Christianity throughout the world. 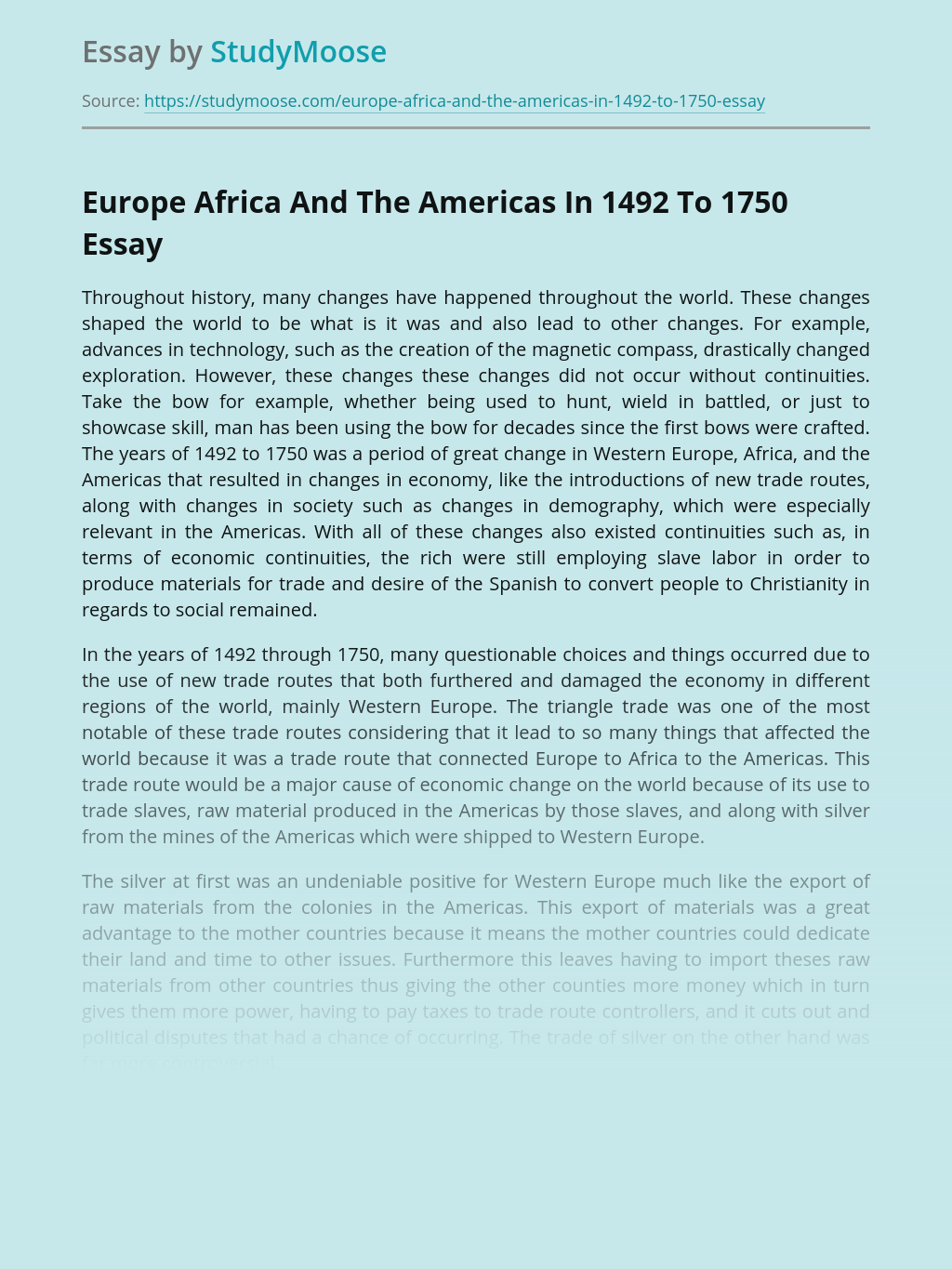 Turn in your highest-quality paper
Get a qualified writer to help you with
“ Europe Africa And The Americas In 1492 To 1750 ”
Get high-quality paper
Helping students since 2015
Stay Safe, Stay Original