1. What does Euphiletus’s testimony suggest about the roles both men and women were expected to play in Athenian society in general and within the home in particular? Women were defined by their roles as daughters, wives, and widows, women were closely supervised and had limited legal and political rights. Women were expected to take care of the children in the family and do household work that was not done by a maid. Men were typically the protector of the household, therefore the male would sleep on the ground floor in order to react in the event of an intrusion or emergency.

Don't use plagiarized sources.
Get Your Custom Essay on Euphiletus’s testimony Just from $13,9/Page

2. How did these expectations shape the physical geography of domestic space as revealed in the overhead views of a Greek house? Most women spent a significant portion of their lives segregated in their own quarters, usually on the second floor of the house to limit access to the street. Typically, men’s quarters were on the first floor, intended in part of prevent unsupervised meetings between women and men from outside the family.

This idea of men and women living on separate floors emphasized the differing gender roles in Greek society, men were the protectors and women cared for the children.

3. According to Euphiletus, why did his wife cross the boundaries of this geography? How did this set the stage for his woes? According to Euphiletus, his wife crossed the boundaries of the domestic space’s geography so that she could better care for her child without having to go to a different floor. It was his idea to put her on the first floor, regardless of the ideas in Greek culture about protection and keeping the women away from access to the streets. This set the stage for his woes because he gave men the opportunity to come and seduce his wife. It would be harder for him to catch his wife in the act of infidelity if she was closer to the door. 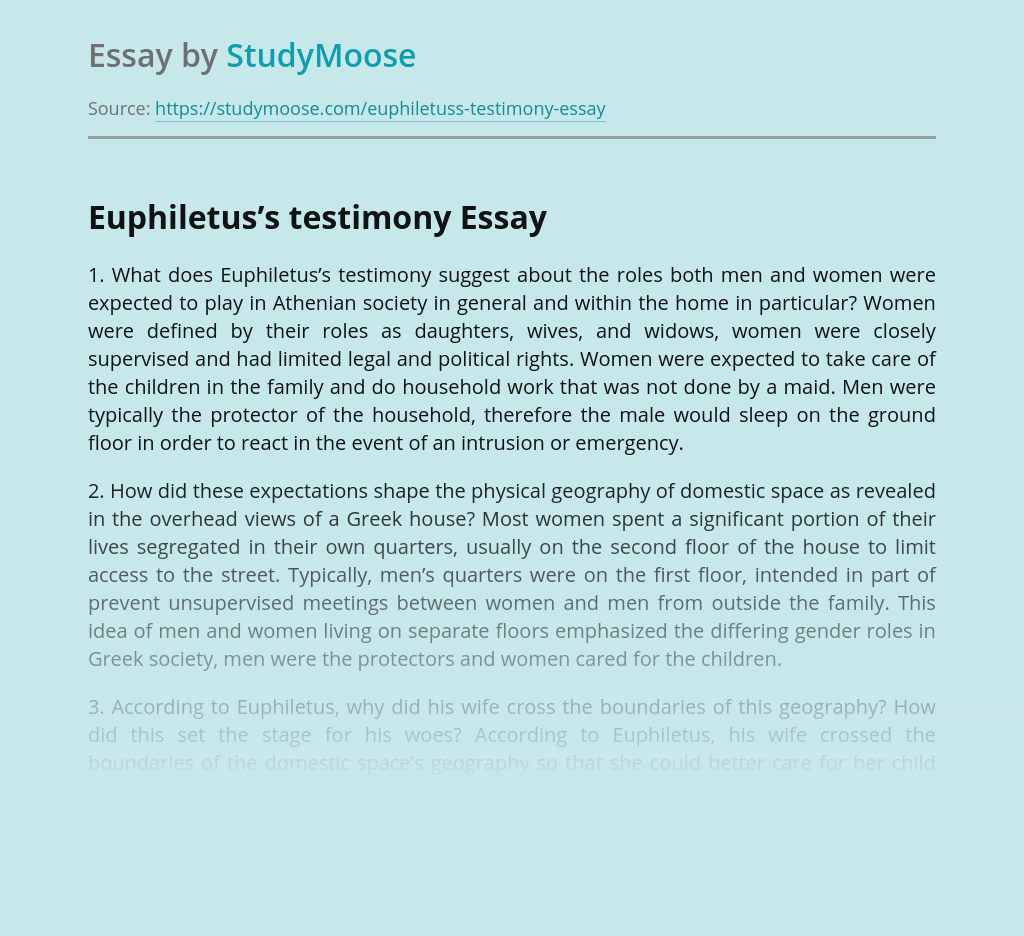 The definition of a lawsuit is a civil action brought in court in which a plaintiff demands another person, known as the defendant, pay this person equitable resolve (dictionary.com). In other words they want payment for being wronged in the past. If the case is found to be legitimate and proven justifiable, the defendant pays... VIEW ESSAY

View sample
Get Essay
﻿The Era for Stay-at-home Dads

For generations, the gender role stereotype within the family has been the same: the father is a deserved pillar of family, and he has responsibility to be a breadwinner by going out to work to make money rather than staying at home as a homemaker. However, over the past few decades, the conventional gender role... VIEW ESSAY

View sample
My Family, My Everything

Family is the cement the mends my life, keeps me grounded, and allows me to be a part of something greater than myself. My family has always been very close, we always look forward to spending time together. We have mostly gotten along and supported each other. Not to say we never get mad at... VIEW ESSAY

View sample
Analysis of the Poem the Red Hat

Rachel Hadas’ poem “The Red Hat” is distinguished the perspective of the parents of a young boy who begins to walk to school by himself. The poem reveals the actions and emotions of the moms and dads who have problem with allowing their kid to end up being more independent. Nevertheless, this poem is not... VIEW ESSAY