The fact of cloning

But it can be argued that cloning is unnatural as, certain types of cloning, such as cloning for medical needs may be questioned. People may believe that there are some ethnical issues or dilemma’s involved, causing some to protest. These different views cause arguments to vary to either one side or the other. However many argue that cloning is unnatural, and it should not be done, as some clones are just produced for the embryonic stem cells. Many religious people have different views on cloning thinking that it is just wrong; they believe there are many ethnical dilemmas with making clones.

Don't use plagiarized sources. Get your custom essay on
“ The fact of cloning ”
Get custom paper
NEW! smart matching with writer

The fact of cloning becoming a future medicine

The religious beliefs cause many to go against the fact of cloning becoming a future medicine. Some religious perspectives of cloning are they believe that each human was made especially in God’s image. When cloning another person, they are being made in that person’s image, not in God’s.

This is what many Roman Catholics believe. Others have: mixed views, similar ideas and totally opposite concepts. Some Islamic people believe that it is can be good and bad in different situations, there should be no limits to research because God gave us the knowledge to do it.

These are the some beliefs of some religious varying from different religious ideas of cloning as this there are other, beliefs from adults, scientists and many more expressing their opinions. On the other hand you many believe every scientist would be more all less for cloning, well you more or less right.

Positive views accompanying, their backgrounds for cloning was made by Embryologist Dr Ian Wilmut, as he believes that cloning is a great way to as referred to genetics study and can enable further research on new disease, believing that cloning is an ideal method.

Cloning is a step forward to human medicine

Well as Dr Ian Wilmut, many other doctors believe cloning is a step forward to human medicine as in future faulty genes can be replaced without the doubt of them being rejected, as well as the above many scientists have been trying to find out ways of creating clones. There are many debates going for and against cloning, which out weights the pros and cons of cloning, some of which are: Pros  Cloning will improve the overall quality of science and life.  Cloning might produce a greater understanding of the causes of miscarriages.

Cloning experience may add to the increased understanding of genetics.  Cloning could be used for the parents who risk passing a genetic defect to a child. Damage to the nervous system could be treated through cloning. Cloning will allow a woman to have one set of identical twins Cons  Those that do not agree with cloning feel that is an affront to religious societies.  Cloning may reduce genetic variabity.  Cloning may cause people to settle for the best existing animals.  Cloning is currently an expensive process.  There is a risk of disease transfer.

Any research into human cloning would eventually need to be tested on humans.  Cloning might be used to create a “perfect human”. Cloning might have a detrimental effect family relationship. However the debate over cloning has more pros out weighting the cons, giving us a over site of the many advantages cloning has and the effects of it as well. Cloning has many ups and downs nevertheless there are many different ways in which it can be used to adapt and analyse new ways of medicine. Dolly the Sheep: Dolly the sheep was the first mammal to be cloned from an adult cell, and successfully. 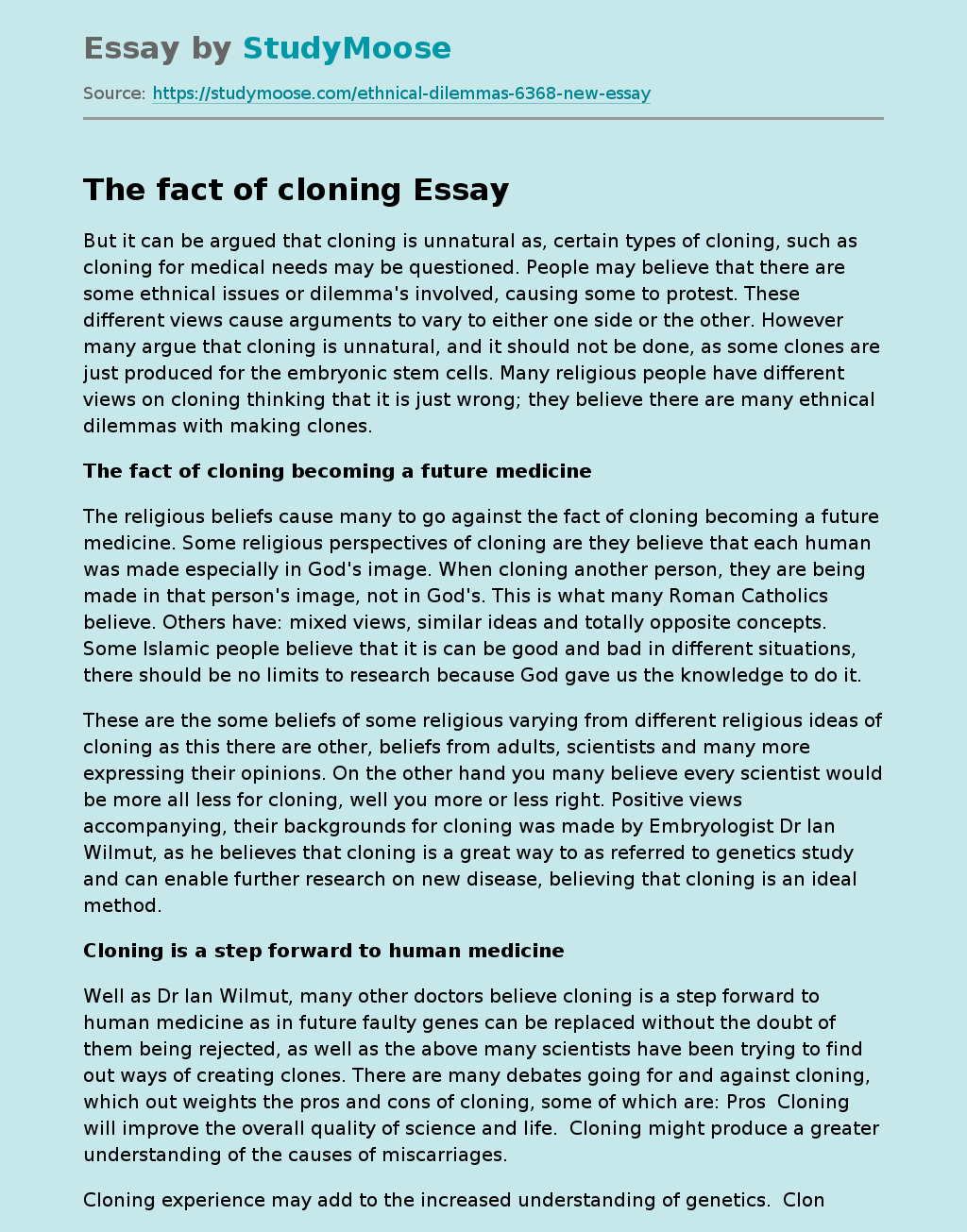