Ethics: What is Moral Absolutism?

Absolutism is making ethical decisions based on objective rules. The concept views issues in a binary, black-and-white way, without leaving much room for any nuance. A downside to absolutism is that it considers neither the complexities of the individual situation nor cultural factors. An example of the limits of absolutism is apparent in the discussion of murder. The traditional Divine Command Theory explains that one should love their neighbor because God commands it. God determines what is right and wrong, good and bad.

Don't use plagiarized sources. Get your custom essay on
“ Ethics: What is Moral Absolutism? ”
Get custom paper
NEW! smart matching with writer

Relatedly, murder is also a sin because God forbids the act; however, such an absolutist argument against would not resonate with both non-Christians and people who do not believe in God. Relativism is a natural way and it is not right or wrong in what we do. There are an abundance of strengths and weaknesses tied to relativism. Some strengths being it allows for diversity and not for everyone in the world to be or think the same.

For example, if society all dressed, Spoke, ate the same, how would we differ from who we want to be. If everyone’s views were the same, we would live in a shallow world.

If an individual state that something may be right for him or her but not for themselves, they may be showing ethical relativism. 1If relativism is true, then there are no moral absolutes, but instead what is morally right could and probably vary from one culture to another. Not every religion demands such behavior. For example, the religions of the ancient Philistines and Canaanites were very immoral with such practices as temple prostitution and child sacrifices.

What may be right for one culture or a large group of individuals may not be right for others. Weaknesses of relativism include being able to decide on what is right and what is wrong and would have no moral reasonings. Absolutism compared to Relativism in today’s world is tricky. People of today only know what is right and wrong based on what someone told or learned through experience. Thinking about what is right and being right are not one in the same. As a society, who are we to judge others; That is God’s work.

Ethics: What is Moral Absolutism?. (2020, Nov 27). Retrieved from https://studymoose.com/ethics-what-is-moral-absolutism-essay 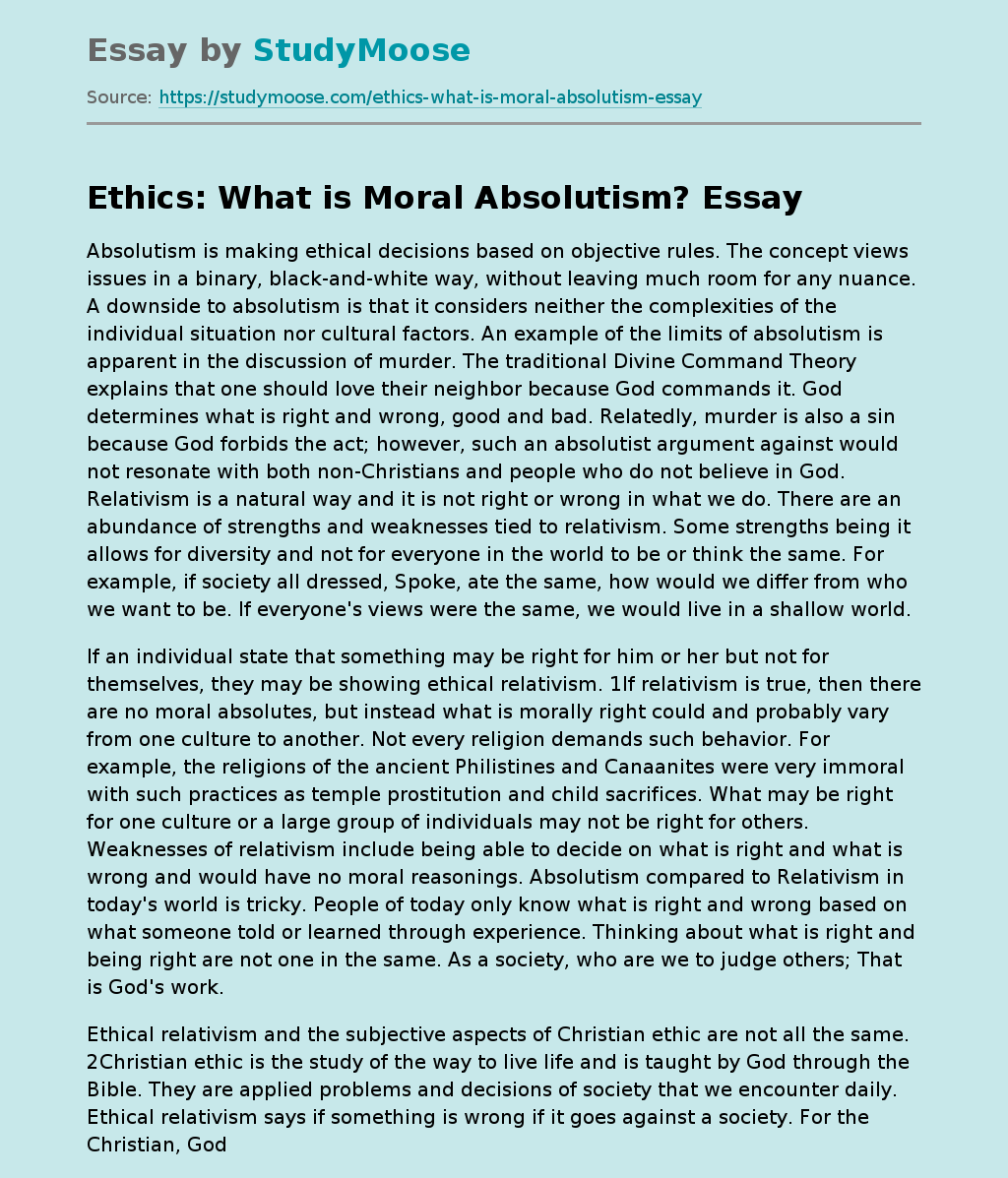