Ethics for a Criminal Justice Career

For someone who chooses to become a law enforcement officer he or she must understand the importance of having moral ethics standards in order to do the job effectively and professionally. Police officers are held by the public to a higher standard of morality and are expected to be above reproach. Sadly, we see in the news all to often police officers that have exhibited unethical conduct both on the job and in their private lives. When an officer commits an improper act of some type it impacts the entire law enforcement profession, in some cases it makes it hard for other officers to do their job without ridicule.

Don't use plagiarized sources. Get your custom essay on
“ Ethics for a Criminal Justice Career ”
Get custom paper
NEW! smart matching with writer

Unfortunately, the public does not differentiate between officers, departments, or uniforms when a scandalous act occurs. The purpose for anyone pursuing a law enforcement career to study ethics is essential to keep the integrity and the trust of the public. A look into how and why officer should make ethical decisions, to examine the motives for the choices they make and see what is the influence that guides them to make the choices they do.

The Denver Police Department for example has the recruits in the police academy recite the police code of ethics every morning along with the pledge of allegiance. This tradition has carried on because of a police scandal that took place in 1961 that involved a number of officers who were committing burglaries, 47 officers were stripped of their badges and then went to prison. That year became known as the city of Denver’s year of shame, in a reprint of the original article in the Denver Post in February of 2010, the question was asked, How did it happen? “The department made it easy for us,” the leading police-burglars said.

They pointed to a breakdown in departmental discipline and supervision that made it possible for them to double as safecrackers. As the year ended, steps were being taken to repair that breakdown. The International Assn. of Chiefs of Police was undertaking a departmental reorganization program, which is expected to make sweeping changes in police command policy, and, possibly, in command personnel. Some observers argue that only a thorough shakeup can restore public confidence in the scandal-ridden department.

The answer the officers gave was insufficient because they were blaming the police department’s lack of supervision and breakdown in discipline as a reason for their crimes. Police officers need to have their own built in reasons for choosing the most ethical way, because even with increased supervision and discipline officers spend most of their shifts without supervisors around them. An officer must develop a decision making process that will be based on a standard that causes them to make the ethical decision immediately when faced with a moral dilemma. There are four major perspective theories of ethics that influence the decision making process for making choices, they are the Moral Virtue perspective, the Deontological/Formalism perspective, the Utilitarianism perspective, and the Biblical perspective. The moral virtue perspective is based largely on Plato and Aristotle theories, in (Sam Souryal’s book, Ethics in Criminal Justice, 2007) he points out that Aristotle argued, “that because no one is born ethical (or unethical), people must spend their entire lives actualizing their potential in pursuit of happiness.

This lifelong endeavor should be regarded not only as a means, but also as an end, desirable in itself.”(p.14) Aristotle believed that virtue ethics are learned through habit; therefore the application of virtuous behavior is brought about only through practice. Law enforcement agencies when recruiting candidates do extensive background investigations that include going to the schools they attended growing up and interviewing their teachers and friends. A polygraph test is given and psychological profiles are done all with the intention to determine those who demonstrate strong moral values before they are hired. In an FBI Bulletin article that focuses law enforcement ethics shows that in the pursuit of finding those who exhibit virtue ethics they say: Police departments’ best efforts will not prevent instances of police misconduct.

Proponents of virtue ethics argue that certain officers misbehave because they lack character. These “bad apples” managed to “slip through the cracks” despite their unethical values. They argue that police abuse occurs in isolated incidents and involves a few immoral opportunists who were corrupt before they became officers. Unfortunately, this interpretation fails to explain how otherwise exemplary officers with no prior history of wrongdoing, many of whom are sterling role models in their families, churches, and communities, can become involved in misconduct. (www.fbi.gov) In police academies across the nation are training police officers in ethics, it has become part of the curriculum in order to prevent a scandalous situation. In an online article at PoliceOne.com makes a very interesting point concerning virtue ethics development in a person: It is unlikely that an increase in ethics training alone will lead to more ethical policing. You can’t train ethics in the same way as other skills.

It’s not a definable ability but is instead the result of education comprised of peer discussions, formal and informal training, and thoughtful reflection. (www.policeone.com) There needs to be more than just virtue ethics which morality is an overall concept to of people wanting to make their lives better. A problem that arises is who determines what things can be done to accomplish this, a choice to do something to live a better life could hurt someone else’s quality of life. Now a look into what is called the Utilitarianism theory as defined in a book on Criminal Justice Ethics by (Cyndi Banks, 2009) which states that consequentialist theories contend that the right thing to do always depends on the goodness of consequences.

Utilitarianism is a consequentialist moral doctrine because, for the utilitarian, morality is solely a matter of consequences. (p.280) There is an appeal of utilitarianism to people because as (Rae, 2009) points out, “All one must do is weigh the anticipated good consequences of an action against its anticipated harmful ones – the bottom line produces a greater balance of benefits. If it produces greater benefits, then it is the most moral course of action” (p.74) The police officers in Denver that were committing the burglaries could have and may have used this theory as a justification for their illegal acts. It was said that their pay was not sufficient and they needed to do this in order to provide for their families, the benefit of that would outweigh the crime.

Rea also shows how utilitarianism could justify obvious injustices, “such as contriving evidence against an innocent person to prevent widespread social unrest that would result in loss of life and substantial property damage.” (p.75) This theory if used in the law enforcement profession could cause incredible harm to their community and could justify immoral choices. This cannot be a theory that should be used by police officers to guide them in making ethical choices because the end does not justify the means. The Deontological theory according to (Banks, 2009)

Is in contrast with the utilitarianism theory because it takes the view that to act rightly, persons must first of all refrain from doing thins that can be said to be wrong before the fact; these wrong acts are defined by what are variously called rules, laws and constraints. The Deontological theorists claim that the rightness or wrongness of an act depends entirely upon the kind of act that has occurred and not upon its consequences. (p.p. 280-281) For law enforcement officers the deontological perspective would be a much better theory to follow because the decision would be based on the act itself. If the act a police officer would chooses is wrong, he or she should not even consider doing it for no other reason than it is wrong. This would be inline with the police code of ethics that sets out strict guidelines for officers to do, no matter what the circumstances are.

“The Christian will tend to be more deontologically oriented because of the emphasis on Christian Ethics on the commands of God as moral absolutes and guiding principles.” (Rae, 2009 p. 17) After becoming a Christian while on the police force the difference in the work ethic was obvious to the command staff. The power of the Holy Spirit was transforming in giving the ability to follow God’s law and to understand that whatever decision was made, is for the glory of God. The Biblical perspective is the guiding force for a Christian officer; it does not automatically prevent ethical struggles, the same issues and temptations are still out there such as the high rate of divorce, alcoholism and suicide. They all could succumb to the same problems as any police officer such as anger, lust and promiscuity, greed, hatred and bitterness in the face of their daily challenges.

It is easy sometimes in this field to forget obedience and submission to God’s authority, while possessing the authority given to them as police officers. They must always remember that they are slaves of God and he gives all authority in heaven and on earth. It is difficult to understand how any officer without Christ can function and remain pure given the environment they work in. An officer with a Biblical perspective should not be as prone to giving in to unethical decisions when facing dilemmas A police officer’s perspective will determine the way he or she handles the ethical dilemmas that occur on the job. The verse found in Colossians 2:8 should be the guide for a Christian police officer to follow the Biblical perspective and not the perspectives the world offers, “See to it that no one takes you captive through hollow and deceptive philosophy, which depends on human tradition and the elemental spiritual forces of this world rather than on Christ.” (NKJV)

Ethics for a Criminal Justice Career. (2016, Mar 17). Retrieved from https://studymoose.com/ethics-for-a-criminal-justice-career-essay 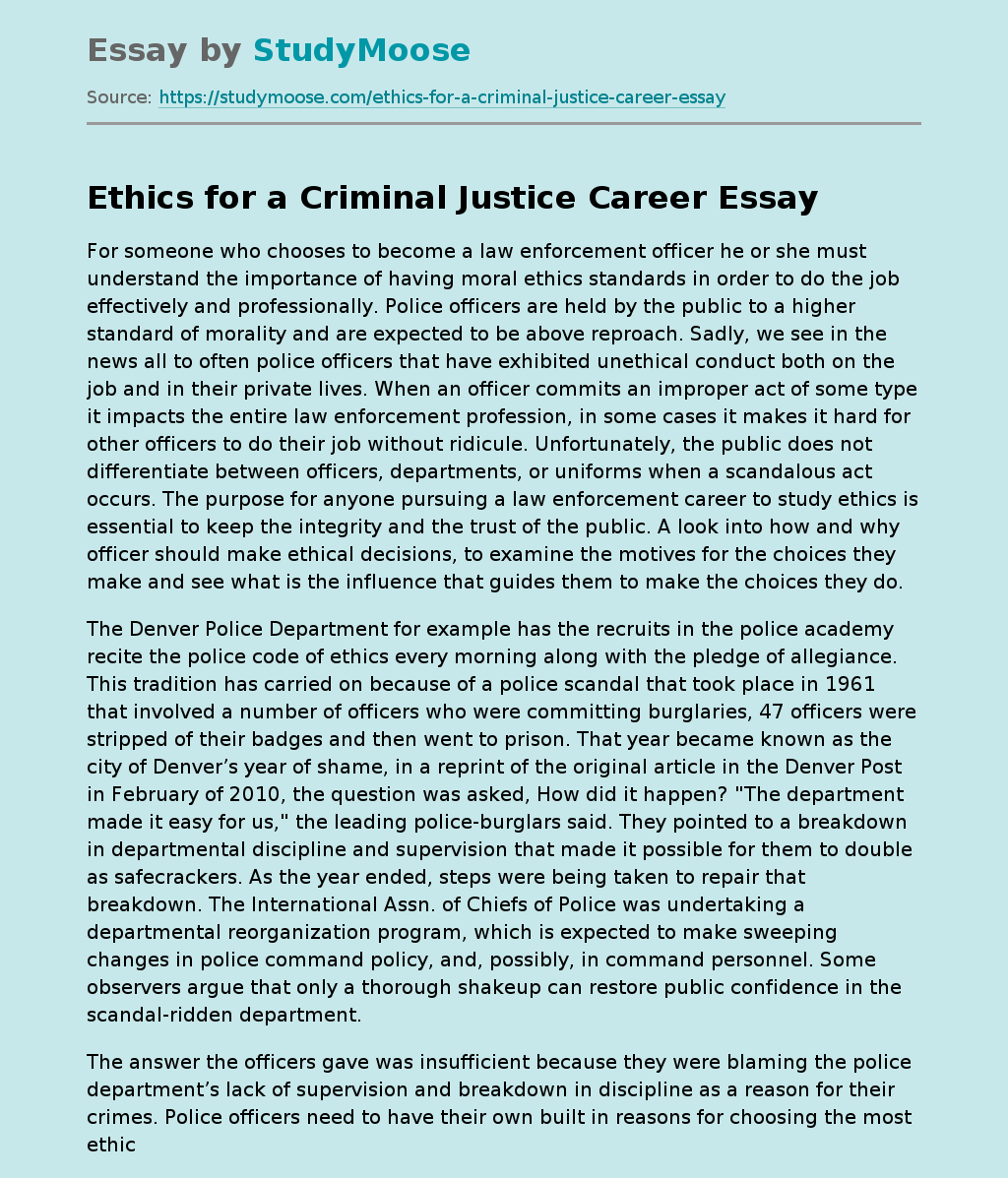