The movie “Henry’s daughters” reflects a big amount of ethical issues at individual and societal level. Sorted by importance and the impacting level, the following list shows the highlighted ethical issues based on my perception. 1. The selfish perception of benefits that Henry had. Such selfish that even his family would be affected. If his daughters cannot trust him, how his employees will? 2. The Invasion of privacy. There are issues existing with gathering private data about individuals using the technology.

For instance: cameras in the offices. 3. The fact that some work done by Julie for OUTOCAR was used without giving her credit. 4. The negative daring from Julie’s co-worker. This intentional and disrespectful interaction with sexual intentions or the sexist jokes throughout the movie should not be tolerated.

5. The influence of political and social factors when taking a decision that should be based on technical and engineering aspects. 6. Commented issues between family and friends that might be confidential. For example: Laura and Julie are housemates, where they do not avoid talking about the project.

The problem appears when both discussed proprietary information of the company. 7. The unhealthy competition of three family members at their professional areas. Bad business, at the end the movie shows that there is more to lose when we involved family in such unethical way.

Engineers are responsible for creating the everyday tools that everyone uses. Because engineers create the tools that people use, of course there needs to be an ethical code which every engineer must respect and follow. The film (Henry’s Daughters) takes a peek into many of the ethical issues raised by engineers. However, all of them might be solved by the proper moral propositions. Some ideas are in establishing: the proper environment, ethics as a priority when adding new employees, and fair incentives. The culture of the company should adopt an open work environment, happy and fair to all employees. Therefore, the actions of the company must be oriented towards the welfare and morale. The culture should take into account the goals and objectives of the company, but the monetary targets should be the only ones highlighted. Nevertheless, the key is always keeping happiness and productivity together. New people, ideas, and strategies can lead to behavioral and performance changes in order to mold new ways of thinking and culture changes.

To be more specific, the company’s culture can improve by rotating managers with different views of competitive conditions or operations. It is a way to supply different, needed skills or capabilities from the outside. It is also important to add, for old and new employees, evocative company’s purpose. This is to provide an address to stimulate employees’ learning, and so, they have something they believe in beyond just a “job.” Also it is vital to provide encouragement and praise to those employees that show progress in any project. Incentives affect behavior and performance and attract new resources and capabilities, which can lead to culture change. On the other hand, the movie shows how disproportional incentives can blind people. Henry’s actions were illegal. Taking the prize for a competition that was not fairly won is highly unethical. Obviously, he got blind because of his selfish point of view of incentives.

All these propositions should be analyzed and applied by both, employees and managers. They should actively interact to discuss suggestions and ideas to improve company’s culture. Finally, once the ideas were picked, communication is the key. Company policy should be seen through all marketing material, including TV, magazine, newspapers, and websites. Career fair visibility is important as well to get news about the company out to the public and potential employees. Once those portals (to communicate ethical factors and others) are established, the focus can be the employees’ productivity. Monthly newsletters from company executives highlighting company policy should be sent to employees, so they are aware of changes or improvements being made.

All these ideas are based on my perception about the topic. It is a way to show how my perception disagrees with Henry’s. Instead of following a code of ethics, Henry has an “ends justify the means” philosophy and does not consider ethical and moral implications in his work. He bribes DOT executives and tangles himself in conflicts of interest. In the end, Henry pays the consequences for his actions when the senate ethics committee finds him guilty of unethical practices. His reputation is ruined and his relationship with his daughters is damaged. All of this could have been avoided. He sadly lost much more than he was able to win. 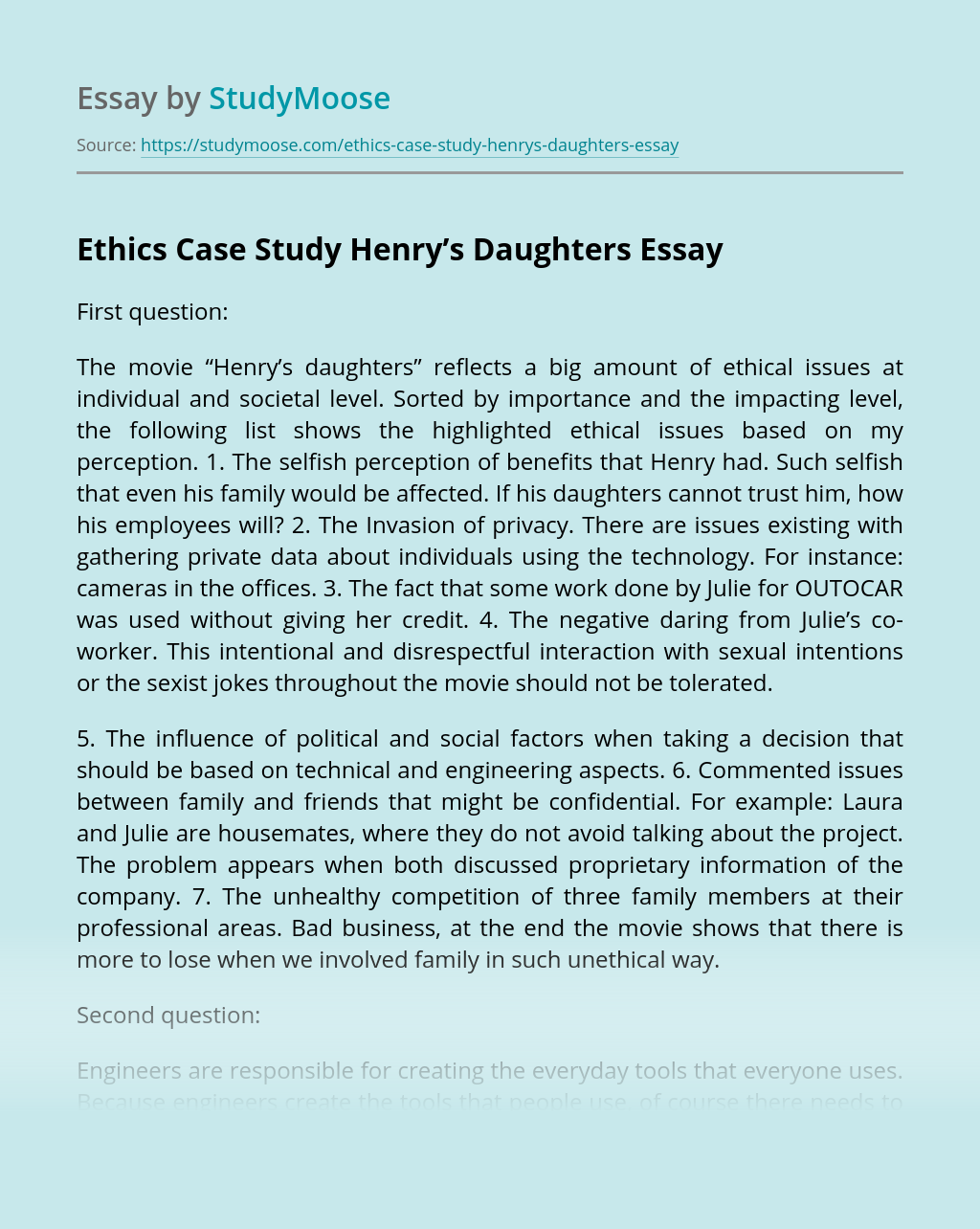 In this essay I will discuss the differences between Hume’s ‘natural’ and ‘artificial’ virtues. I will first give Hume’s explanation of why there is a need for a distinction or classification of virtues, and the basis on which he makes the distinction, before describing the two categories and their criteria. I will look at the... VIEW ESSAY

The term “virtue” is from Latin and originally meant “strength” or “power”. It is based on the word vir – man.. The ancient Greeks, starting with Homer, praised virtue. Despite the research and time, it is difficult to say precisely where virtue lies. The right measure is very difficult to achieve, and it is often... VIEW ESSAY

Although more than two hundred years separated Gordon Sinclair and Oliver Goldsmith, in many ways they had similar attitudes referring to “Americans” and “National Prejudices.” Gordon Sinclair, a prominent Canadian writer, who over the years has been tired of all of the American bashing, acknowledges in his many broadcasts and writings; the enormous contributions Americans... VIEW ESSAY

As I sat down to write this paper, I really struggled to get it started with this definition. It is one of those things that if spoken about, you know what it is, but the minute you are asked to break it down, the task is not easy. I guess I will begin by saying... VIEW ESSAY