Ethics and value can seem rather similar, but there is a basic different. Value define one’s person character while ethics stresses more of a system in which those value are applied or expected. In other words, ethics point to a standard of codes or rules expected to be followed by the group or organization to which the individual belong. This could be anything from religion, clubs, the workplace or even family. So while a person value are usually unchanging, the ethics he or she practices can be greatly different.

Don't use plagiarized sources. Get your custom essay on
“ Ethics and value can seem rather similar but there is a basic ”
Get custom paper
NEW! smart matching with writer

A definition of values and ethics is important in understanding its fundamentals. Different sources of ethics and values can then be considered, and examples that may or may not have used values and ethics to get ahead in career success are examined. Value can be defined as things that are important to or valued by someone. That someone can be an individual or, collectively, an organization. One place where value are important is in relation to vision.

One source of professional ethics and value can be found in international development. Development ethicists assess the ends and means of local, national, regional and global development. Worker involved in international development include policy makers, project manager, grassroots communities, and international aid donors. Each of these confronts moral questions in their work. Thus, ethics principles are implemented to work in bringing social change to poor, developing countries. Ethics principles come from people who have set standards in values and ethics in the past, such as Mohandas Gandhi in India.

He actively criticized colonialism. His demonstration of kindness and self-giving Provides a code of ethics for people working in international development. Another sources of ethics and values in international development is the work of economist. He successfully addressed injustices such as hunger and economic inequality by introducing a new idea of development based on ethics principles. He called the idea his basic human needs strategy. He stresses the value of self-respect and respect of others. In doing so he sheds an economic growth, industrialization, or modernization. But as the expansion of people’s valuable capabilities and functioning. Having good values and ethics on the professional setting is important. Many people read their jobs rules and regulations when they first start. Knowing these rules can make the job easier, which can lead to great success. Different sources that can be used to ensure all business uses, the governing ethics, and the state in which the person is employed. This Sources provided all the rules any employee of that particular company must follow. Some of these rules can affect personal life. most companies have a drug free work environment and conduct extensive background checks to ensure the person being hired will not be at risk for breaking code. Most large companies. In retail there are different mangers on different levels. Besides the basic rules that everyone follows, people of higher ranking have additional rules to accompany their job description and duties. State rules and regulations apply to everyone in a particular state. Usually they coincide with the organization’s rules. A business in California might be the same as the business in New York, but because of the different state rules one might violate the company’s policies. Violating policies or not adhering to ethical principles can greatly affect the level of success one achieves in a career. A twist on how values and ethics affect career success involved an example shown in negative light, specifically professional athletes who put illegal drugs into their bodies for performance enhancement. They lead a homerun terror which brought in tons of revenue for the teams they played on, the league, and for the individual players. There have been others who look steroids, and they paid the ultimate sacrifice with their lives. Some people will do whatever it takes to get ahead. They will cheat if they can get away with it, some even taking it so far that they know the end result is losing years off their life. It is a big price to pay to be rich and famous for just a few years, because once it’s all gone, what do they have left to show for it other than serious health problems. This type of behavior can affect one’s job because the hospital can go out of business and be held liable for their actions. In conclusion, ethics can perhaps be defined as being wrong according to certain figures, as in medical ethics. It is ethical, by medical standards, to treat a soldier from another army, even thought that man was just trying to kill you and your squad, because some one with authority says it is the ethical thing to do. Values can be defined by what one perceive right from wrong. For example, one may think cheating during a test is fine, while another may consider it wrong. The first person’s values include integrity and honesty, and the second person’s lack of value promotes dishonest behavior.

Ethics and value can seem rather similar but there is a basic. (2019, Aug 20). Retrieved from https://studymoose.com/ethics-and-value-can-seem-rather-similar-but-there-is-a-basic-essay 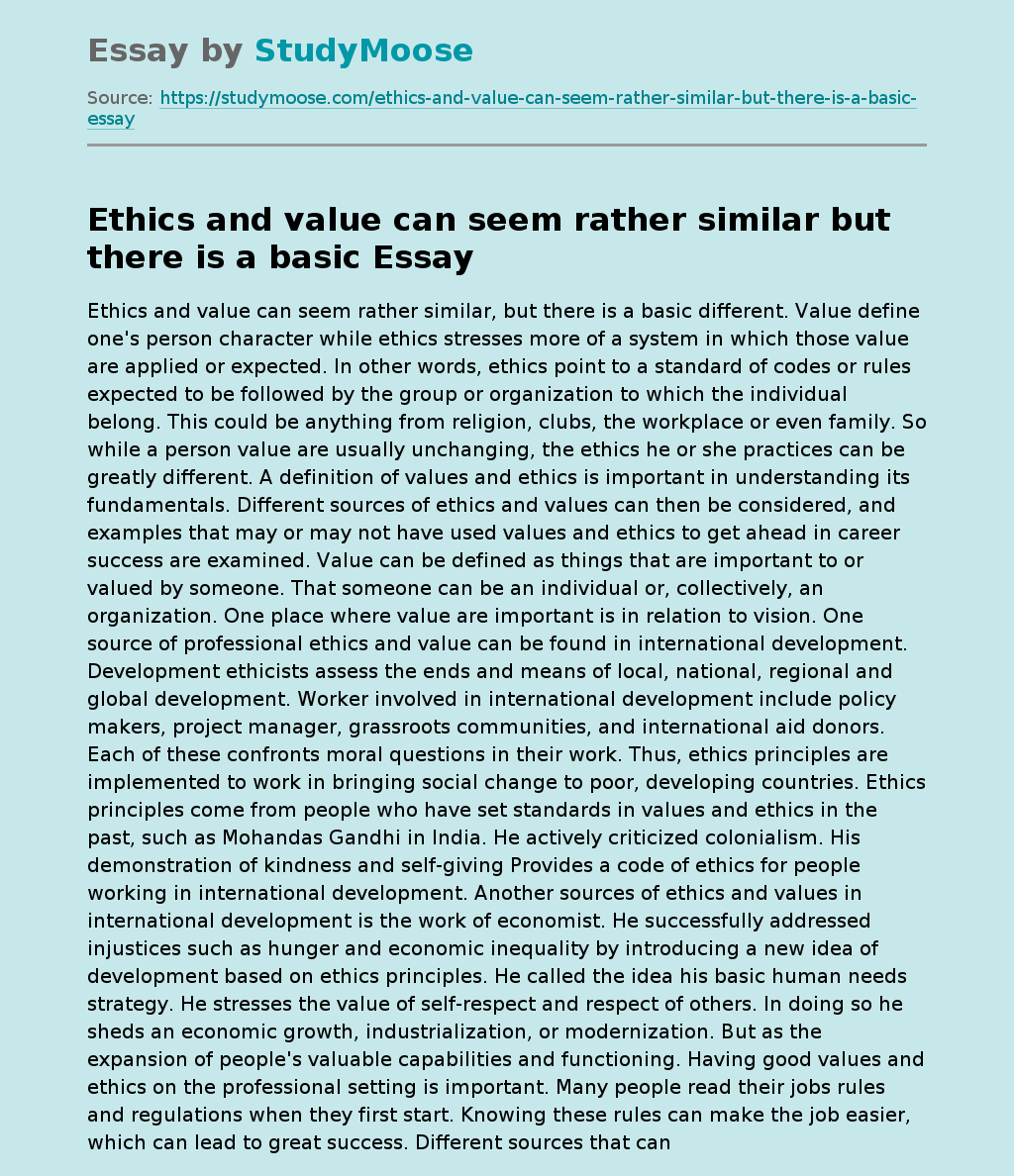