Ethical egoism which simply known as egoism, is of normative & rigid nature which states that a person should do whatever he/she likes and whatever which is in their interest. It also states that a person performing any act other than influence of one own interest does not come under egoism. Robert Olson in his book – ‘The morality of self-interest’ (1965) stated a theory that one should do whatever that promotes or supports one’s self interest, if everyone starts doing it, then it will collectively promote their personal interest.

Don't use plagiarized sources. Get your custom essay on
“ Ethical Egoism and Psychological Egoism of Personality ”
Get custom paper
NEW! smart matching with writer

Psychological egoism is a descriptive type of theory.

This theory states that all actions of individuals are aggravated by their personal interest even if it seems to be act of benignant. People only act to attain their own interests intentionally or unintentional, directly or indirectly. It also states that whatever people do or act they mostly intend to do that, while doing it they might act selfishly. An objection regarding psychological theory was stated by William Hazlitt and Thomas Macaulay (1991) that “If a person willingly performs an act, that means he derives personal enjoyment from it; therefore, people only perform acts that give them personal enjoyment.

” This statement concludes that a person will only perform those acts which fulfill their self interest, satisfaction or pleasure. Fallacy in Psychological Egoism The major fallacy in Psychological egoism is hasty generalization Humans are often known to work or act for the welfare of others like donating in charity, doing volunteer work, such acts are not visibly benefitting the one who is doing it. Therefore, it rejects the thought that this theory is applicable under all circumstances, that humans only do what benefits them.

Therefore, basically if one does something that’s for its own greatest good like attaining success it can be applied on both types of egoism that’s strong and weak egoism. But if one acts in a way that is not necessarily in his/ or her greatest benefit for instance doing a volunteer work in a hospital or a disaster struck area, then there are certainly more lucrative ways by which one can effectively use his time although they might not be as morally positive. In such a case weak ethical egoism supports and shows flexibility in this regard.

Contrast of Doctrine of Theories

For ethical egoist the motivation is personal pleasure, your personal benefit can be monetary or otherwise, survival or existence, personal achievement, fame and all those consequences that one visualizes to be fulfilling his personal needs of all kind. If not properly understood ethical egoism promotes greediness & selfishness amongst people where your sole intention/ motivation is your own personal interest.

For Psychological egoist the motivation can be anything other people’s benefit that is satisfying your sense of responsibility, your pleasure arising by fulfilling your moral obligation, your intrinsic happiness arising out of your hard work, your duty or your volunteer act of helping others. Although also in the psychological theory the end product is the personal benefit but ethically it seems productive than ethical egoism which is highly inclined toward misinterpretation. 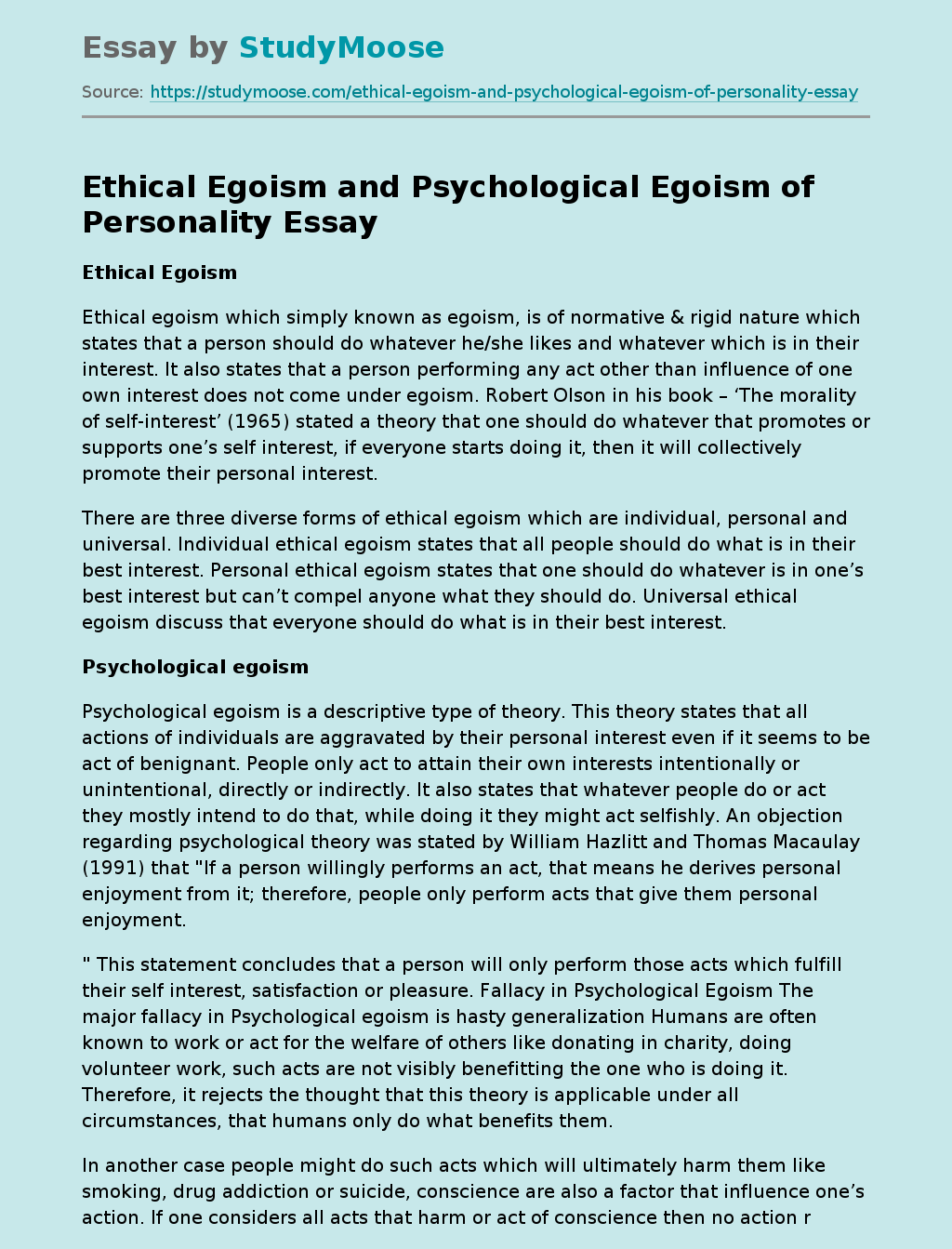