Ethical Egoism and Its Justification

It is highly reasonable that you value yourself over everyone else or at the very least you often put yourself first. We as people are the center of our own worlds. We see the world from our perspective. Ethical Egoism attempts to explain why, we as humans, ought to hold our own self-interest as the utmost importance. The theory would say that everyone has an obligation to go about his or her life acting solely in their own self-interest and that we never act without our self-interests in mind even if on the surface the act appears charitable.

Don't use plagiarized sources. Get your custom essay on
“ Ethical Egoism and Its Justification ”
Get custom paper
NEW! smart matching with writer

It does mention long run best interest takes precedence over the short run. However, we as people often do things that are not in our own self-interest which leads to ethical egoism being flawed. It is this author’s intention to argue that Ethical Egoism is arbitrary, inconsistent, promotes wickedness, and is not a comprehensible moral theory.

When examining a racist, they believe their race is superior for whatever reason yet they have not justification for doing so. Clohesy explains “By giving their interests priority, egoists discriminate against others in a way analogous to racial or sexual discrimination, in which some receive preference over others for insubstantial differences among them” (Clohesy). This is a prime example how ethical egoism supports arbitrariness.

For a theory to be completely applicable it needs to be able to provide an answer for all potential situations.

The theory fails to do so as it’s inconsistent and incomplete. It doesn’t explain what should stop someone when their self-interest means to harm another. Also it has no explanation as to how to explain how one would make a decision when they have no self interest in play and have two equal options. The person would be making an impartial decision which the theory doesn’t account for.

In addition to being inconsistent it promotes wickedness by not condoning or addressing it directly. If it is in a person’s best interest to harm or even murder another then the theory would say they should indeed do so and that it is in the intended victim’s best interest to do their best to prevent the person from harming them. The problem as Rachel’s says is that “the same act cannot be both morally wrong and not morally wrong” (Rachels). If this theory held true then any egoist that felt it was in their best interest to inflict harm or murder would be going around doing so and breaking our society’s moral code. We know that murder is wrong and that if it became a common acceptable practice the society would fail.

This theory would say that altruism exists only if it somehow benefits the individual. It leaves no room to simply do a good deed. “The achievement of his own happiness is man’s highest moral purpose.” (Ayn Rand). As Ayn Rand stated self-happiness and interest take all priority. The idea that someone does something to be kind or helpful to someone else would be interpreted as they are only doing the kind or helpful thing because it somehow benefits them. It eliminates all middle ground which is absurd as there should and can be a middle. It is possible to look out for one’s best interests and that of others. In fact, acting in one’s self interest very often benefits others. An example would be starting a business to make money. To be successful one would need to have made a client or buyer happy thereby helping others.

After looking at the inconsistency and arbitrariness there is one more final point; this is not a logical moral theory. According to Shaver “Finally, if I do not believe that some action is ultimately in my self-interest, it follows from psychological egoism that I cannot aim to do it. But say I am wrong: the action is in my self-interest. Ethical egoism then says that it is right for me to do something I cannot aim to do. It violates practicality just as any other moral theory does” (Shaver). Ethical Egoism as Rachel’s tells us would have us sort the world into two groups us and everyone else. We already know its arbitrary to think one is better than all the rest and the theory provides no answer as to why one is more important therefore we must care about others interests and needs. According to Rachels “This realization-that we are on par with one another-is the deepest reason why our morality must recognize the needs of others. And why, ultimately, Ethical Egoism fails as a moral theory” (Rachels).

I do not believe Ethical Egoism is a comprehensive way of explaining behavior. it is possible to solely act in ones best interest. Personally I can think of many times I’ve done something I didn’t want to do and it didn’t benefit me. We as people cannot go around thinking we are above everyone else. If everyone acts with their interests as well as others interests in mind then that would be a theory I could get behind.

Ethical Egoism and Its Justification. (2021, Feb 26). Retrieved from https://studymoose.com/ethical-egoism-and-its-justification-essay 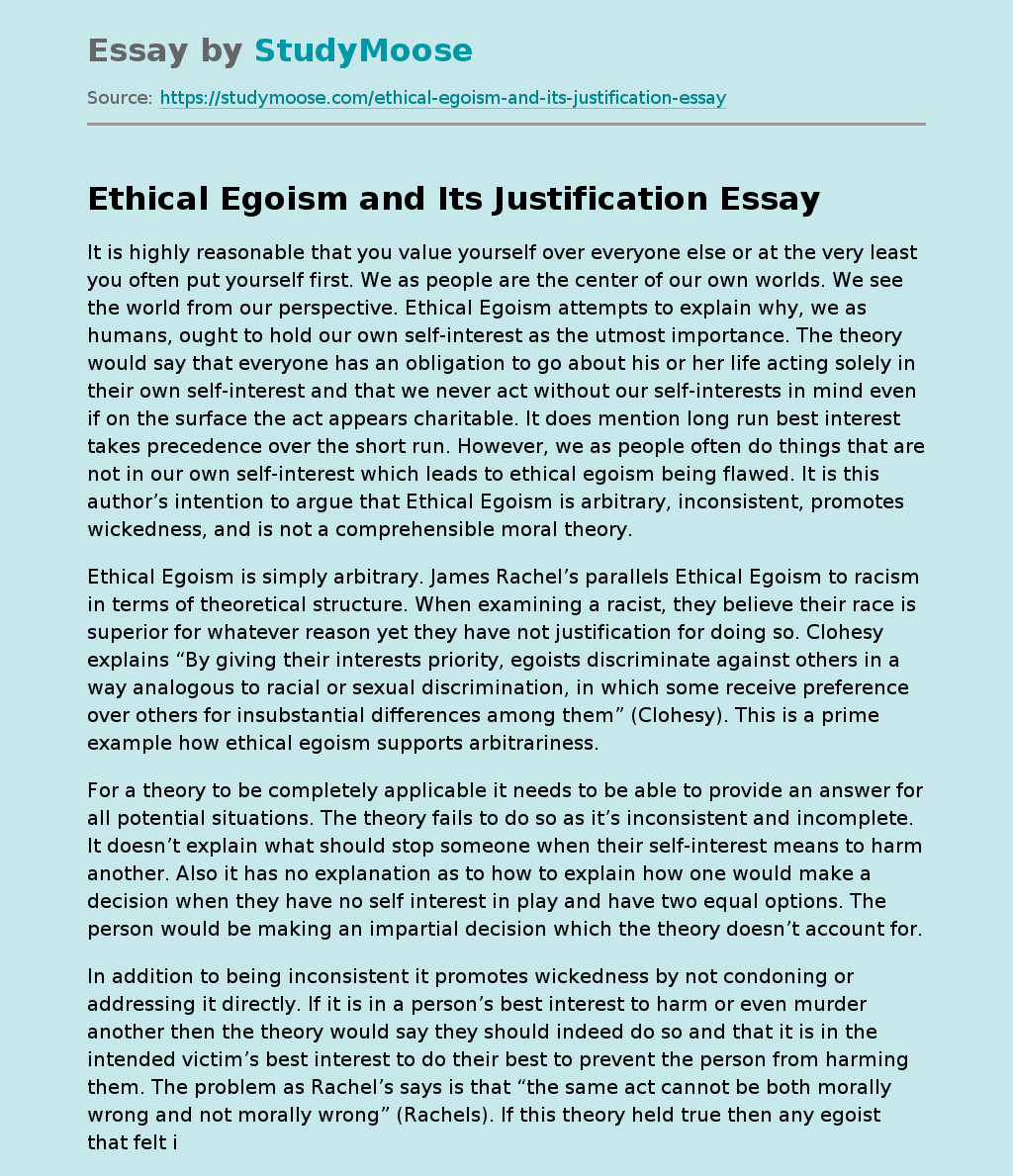