Cinema nowadays leaves a great impact (effect) on the minds of people. Its effect can be seen not only on the elders of rural and urban areas but on the children as well. Going to the pictures has now become a craze with young people, both boys and girls, and it has been noticed that they often economize (save) on other items of expenditure but they must see films every week. This fast growing habit is not only expensive (costly), but also results in considerable (great) waste of precious (valuable) time.

Don't use plagiarized sources. Get your custom essay on
“ Essay Youth And Cinema ”
Get custom paper
NEW! smart matching with writer

Visiting the cinemas too often at the cost of class lectures and by missing lectures also spoils the education of youth. Most Indian films present scenes of sex, violence (fighting), crime, robbery, rape, etc. Education and other experts have repeatedly (again and again) found that the main source (base) of teasing and assaults (physical attack) on girls in our towns and cities, in the market place and elsewhere, is the cinema.

The youth tries to imitate (copy) each and everything which is in the films without understanding that some part of it might leave a negative impression (thought) on them, and this reflects (shows) in their dressing style, their driving, their way of talking etc. The film censors also seem to be more liberal (open-minded) than ever and allow sex and violent scenes which have a bad effect on the mental make-up of youth. In the films today when the daily crimes, murders, robberies are shown some people take it in a wrong way and they purposely learn how to commit (do) such crimes.

They learn the tricks (action) and tactics (plans) used for crimes in the films. Also now abuses (bad things) are so common in almost all the films that even a kid of 10 years is able to speak such abusive language knowingly or unknowingly. There are many cases of youth either running away from home to go to Bombay to try their luck in Bollywood.

Thousands of young boys and girls have virtually (nearly) ruined (destroy) themselves in the senseless quest (mission) for becoming cinema “stars”. The efforts of parents and teachers to give their boys and girls sound education and to teach them good, ethical (moral) behaviour and good morals in order that they may become good citizens are thus defeated (failed). The cinema, it is said, can serve as a good medium of education and instruction, and the message that can be conveyed (expressed) through films cannot be conveyed as effectively through any other channel, such as the radio, because of the colourful and visual impact on the screen. It is not contended (challenged) that there should be a total ban on films.

But steps should certainly (surely) be taken to see that good instructive (useful) films are made, not trash and ruinous (damaging) presentations merely (simply) to cater (supply) to cheap tastes. Knowingly or unknowingly the films molds (shapes) the youth of today in one way or the other and effect of cinema on youth can be seen widely. Even the youngsters in rural areas are so much affected by the movies, that they place the heroes of the film in a very integrated (internal) part of their minds. They try to change their lifestyle according to the films, starting from hairstyle, clothes, dialogues and so on.

It cannot be said that all the films are corrupting youth. Films also have a healthy and knowledgeable influence on the youth. There are films like “BAGHBAN” which was a family film and made us learn a lot. On the other hand, there are films like “RANG DE BASANTI“, “LAGAAN”, “TAARE ZAMEEN PAR” which are a wonderful films, giving the youth to learn so many good things in life. Films like “NAYAK“ are ideal (perfect) lessons for the politicians of this country. Films have inspired young people to combat (fight) against several social evils like untouchability, dowry, etc.

But ultimately it’s “WE” or the individual, on whom everything depends on what he/she gains from the films. We should see the films to enjoy and learn good things and not let the bad things affect us. Thus, “Youth and Cinema” is a notion to be thought upon and concerned. So, beware of what you see and what you gain. 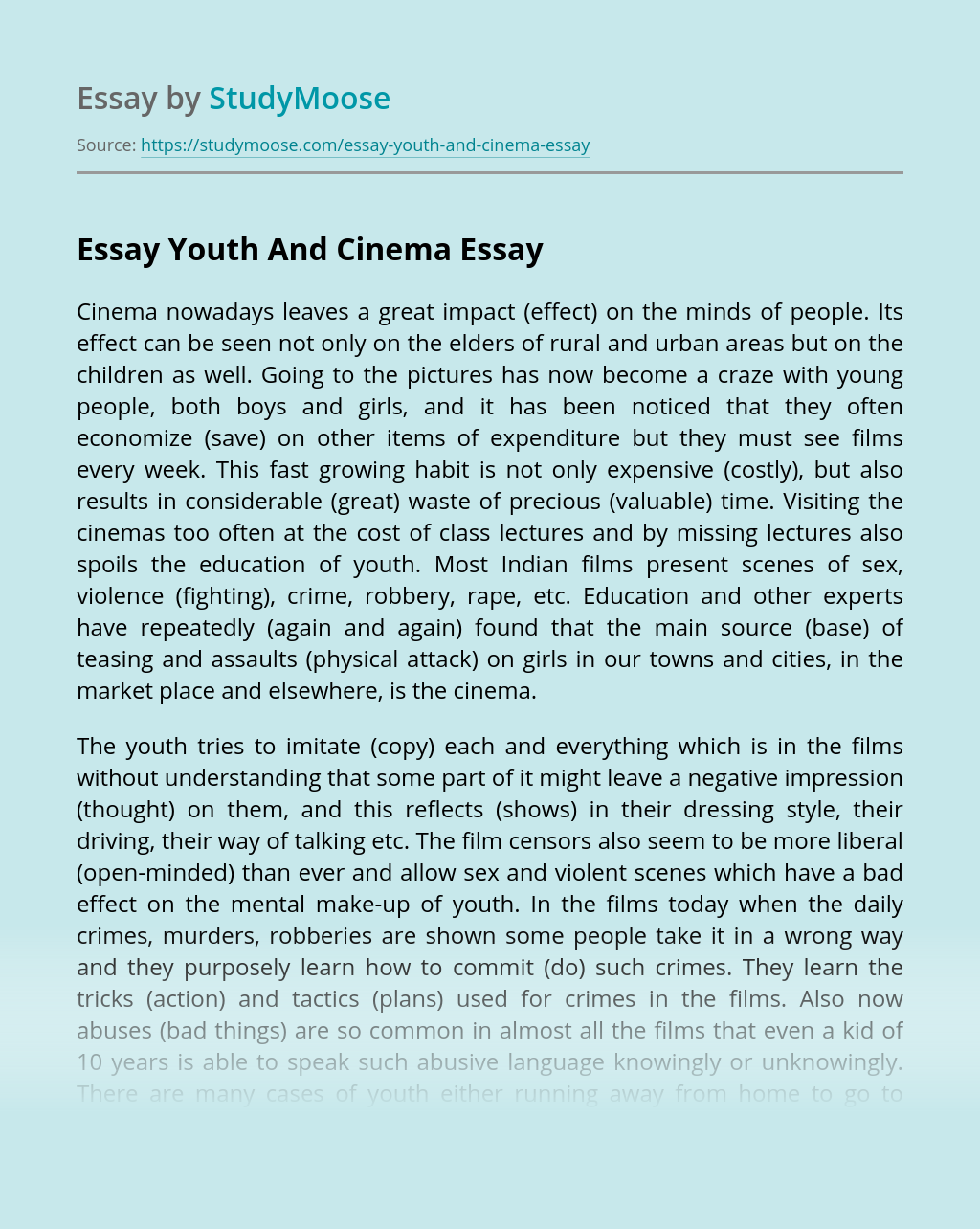