Essay On Political Parties In India

Posted in National Issues of India by Vijay Jaiswal On August 29, 2013. No comments In a modern democratic political system of India, with governments based on Parliamentary model, political parties are central to the working of the political system.

Political parties in Indian Democracy grow up the as spokesman of organized interests. Thus a Political party system in India is an organization of like minded people based together either to preserve and promote group interests or to promote a particular ideology. Usually every party seeks to promote some particular interest and ideology.

Don't use plagiarized sources. Get your custom essay on
“ Essay On Political Parties In India ”
Get custom paper
NEW! smart matching with writer

The political party constantly seeks to capture governmental powers to secure its ends. In a democracy, the party gets into power through elections.

The nature of political party system in India was characterized by Morris Jhones as a dominant one party system. It means that India basically has a multi-party system but one among the many parties is dominant party and monopolizes governmental power. Since independence up to the 4th general election in 1947 this was precisely the picture. The Congress party was in power during all the twenty years from 1947-67 both at the centre and in the states with a brief exception in Kerala in 1958.

The 1967 elections saw the fall of the Congress monopoly in several states where unstable coalitions were established. The sixth General Election in 1977 witnessed the fall of the Congress at the centre. The Janata Government was established. But the Janata experiment soon failed. For Janata was in reality an unstable coalition. The Congress gained back its power in 1980. Then there was a B.J.P. coalition government at the centre and in few states.

On the basis of their influence and aspirations, parties in India fall into two categories:

Thus the Congress (I) or the Jananta Dal or the Bharatiya Janata Party (BJP) – are truly All India parties having some sort of influence throughout India and having All India aspirations.

There are some other political parties which are professedly All India parties but their influence is limited to particular regions. They may be classed us regional parties with All India aspirations. The Communist Party of India (Marxist), the Communist Party of India, the Forward Block, the Revolutionary Socialist Party (R.S.P) etc. fall into this category. The influence of the C.P.I. (M) for example is concentrated in West Bengal, Kerala and Tripura.

The regional political parties are those which are frankly regional in their aspirations emphasizing their ethnic or linguistic identities. The D.M.K. or the A.I.A.D.M.K. in Tamil Nadu, the Telugu Desham in Andhra, and the A.G.P. in Assam or the National Conference in Jammu and Kashmir fall into this category.

There are also some frankly communal parties like the Shib Sena emphasizing their religious identity.

On the basis of ideology, Indian parties may be classified into conservative, liberal democratic and revolutionary parties.

The B.J.P. for example is a conservative party. The Janata Dal and the Congress are liberal democratic parties. The Communist Parties, the Revolutionary Socialist Party etc. are revolutionary parties seeking restructuring of the society along Marxian Lines, while the B.J.P. may be said to occupy the extreme right position in the political spectrum, the Congress, the Janata Dal stand at the centre while the Communist Parties and the R.S.P. occupy the extreme left position.

Essay On Political Parties In India. (2016, Apr 29). Retrieved from https://studymoose.com/essay-on-political-parties-in-india-essay 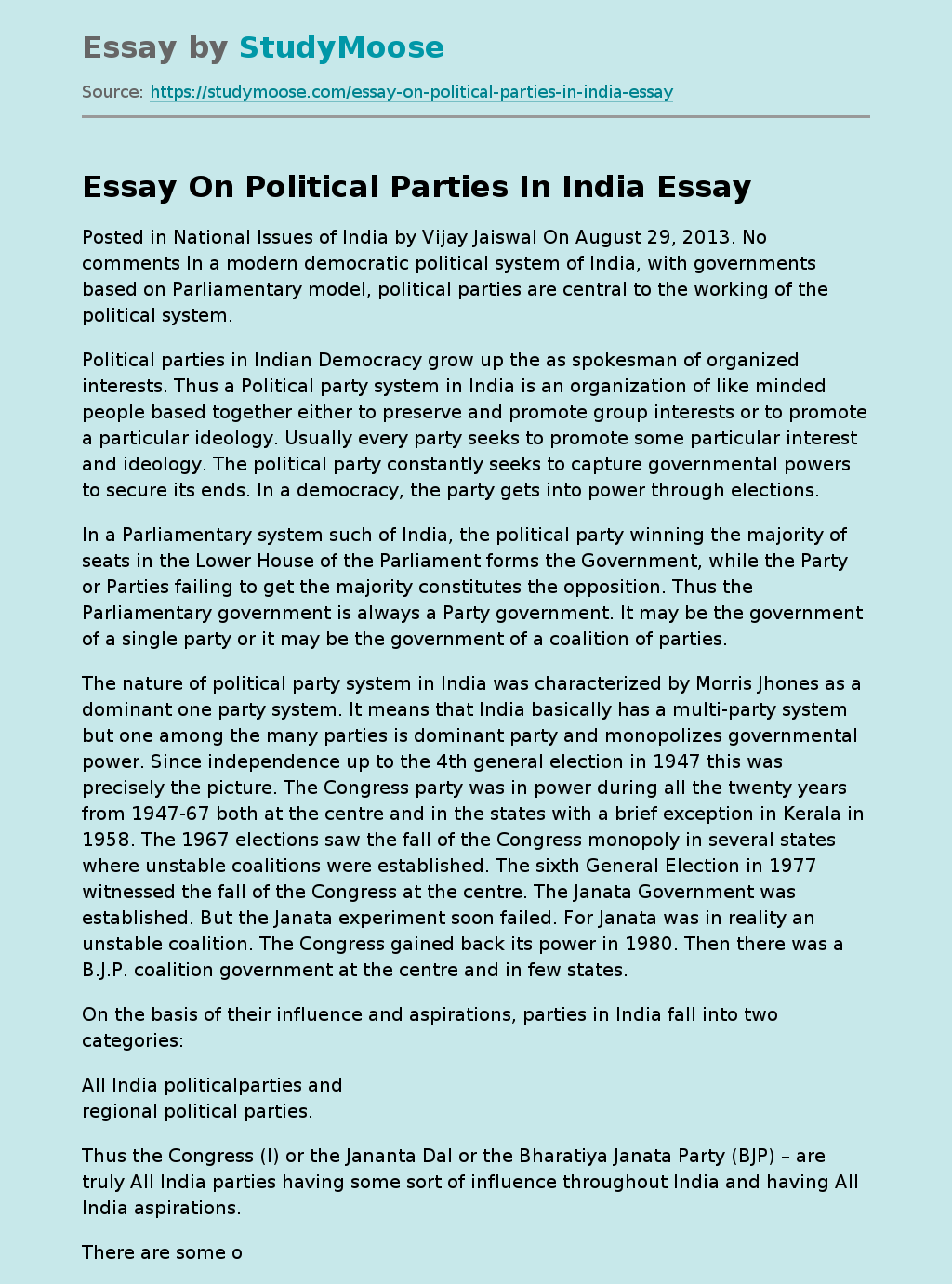