Essay on Plato's Allegory of the Cave

Marlo Diorio Dr. Mishra – College Writing I “Allegory of the Cave” “Allegory of the Cave”, written by Plato, is story that contrasts the differences between what is real and what is perceived. He opens with Glaucon talking to Socrates. He has Glaucon imagine what it would be like to be chained down in a cave, not able to see anything other than what is in front of him. He tells a story of men that were trapped in a cave and were prisoners to the truth.

Don't use plagiarized sources. Get your custom essay on
“ Essay on Plato’s Allegory of the Cave ”
Get custom paper
NEW! smart matching with writer

These prisoners have only seen shadows.

But because of their ignorance, these slaves to the cave believe that the shadows are real. The story goes on to say that one of the men has been dragged out of the cave. He is not happy to see the real world, yet upset because he is being taken away from all that he knows. As he approaches the outside, he is blinded by the sunlight that he has never seen.

Proficient in: Ignorance Is Bliss

The sunlight can be interpreted as actual sun or as knowledge, making the journey rather painful in mental and physical ways. The prisoner wants to return to his life as a peasant inside of the cave.

When he is outside of the cave, he only wants to look at shadows and reflections, but later proceeds to look at actual objects surrounding him. Lastly, he looks at the sun itself, as he realizes that is what created this beautiful nature. The climax of the story is when the ma realized that he no longer has to worry about reality and reasoning, because he achieved the understanding of it.

Eventually, he goes back to the cave. He is not greeted nicely back at the cave because he is seen to have taken a meaningless trip.

The man who had seen the outside world took it upon himself to teach the others and lead them into understanding the truth of reality. The story finished by Socrates saying that the most qualified and wise people are the best options for leading in government, like the prisoner who discovered truth. Throughout the reading of this symbolic narrative, I found it easy to relate to my own life. This story can be taken as an extended metaphor with a great meaning. I took this story as, the hard path to take out of the cave, was like the pattern of life.

It would never be an easy path to walk down, and it would take a lot of struggling. Only certain determined people will actually make it to the opposite side. Socrates says these most qualified people should be the ones to lead the public. I believe this is also true in today’s society. I say this because when it comes to election time, we as a country are not going to vote for an uneducated lunatic. I believe that the president should be someone intelligent with good morals and very qualified.

In order to reach that high point, you must go out of your comfort zone, like the prisoner did. In life, people go out of their comfort zones all of the time. I’ve always believed that in order to achieve something you’ve never had/done, you must do something you’ve never done before, such as stepping out of your comfort zone. Only the best can be found when you make an attempt to extend yourself as a human being. I relate the cave in this story to the social norm. No one wants to step out of it because I their life, the norm is all there is.

I believe the shadows would represent all of the other things that could be out there, but they have no desire to go find out what they are. They are too comfortable with what they have and haven’t gone looking for more. The cave is a comfort zone for the prisoners in Plato’s time and for teenagers today. Without the outside world, there is no curiosity, no questioning. I believe it is important to question everything, because with questions come answers. And when you find out something you didn’t know, you’re learning. Yes, ignorance is bliss, but ignorance won’t make you president.

Essay on Plato's Allegory of the Cave. (2018, Nov 07). Retrieved from https://studymoose.com/essay-on-platos-allegory-of-the-cave-essay 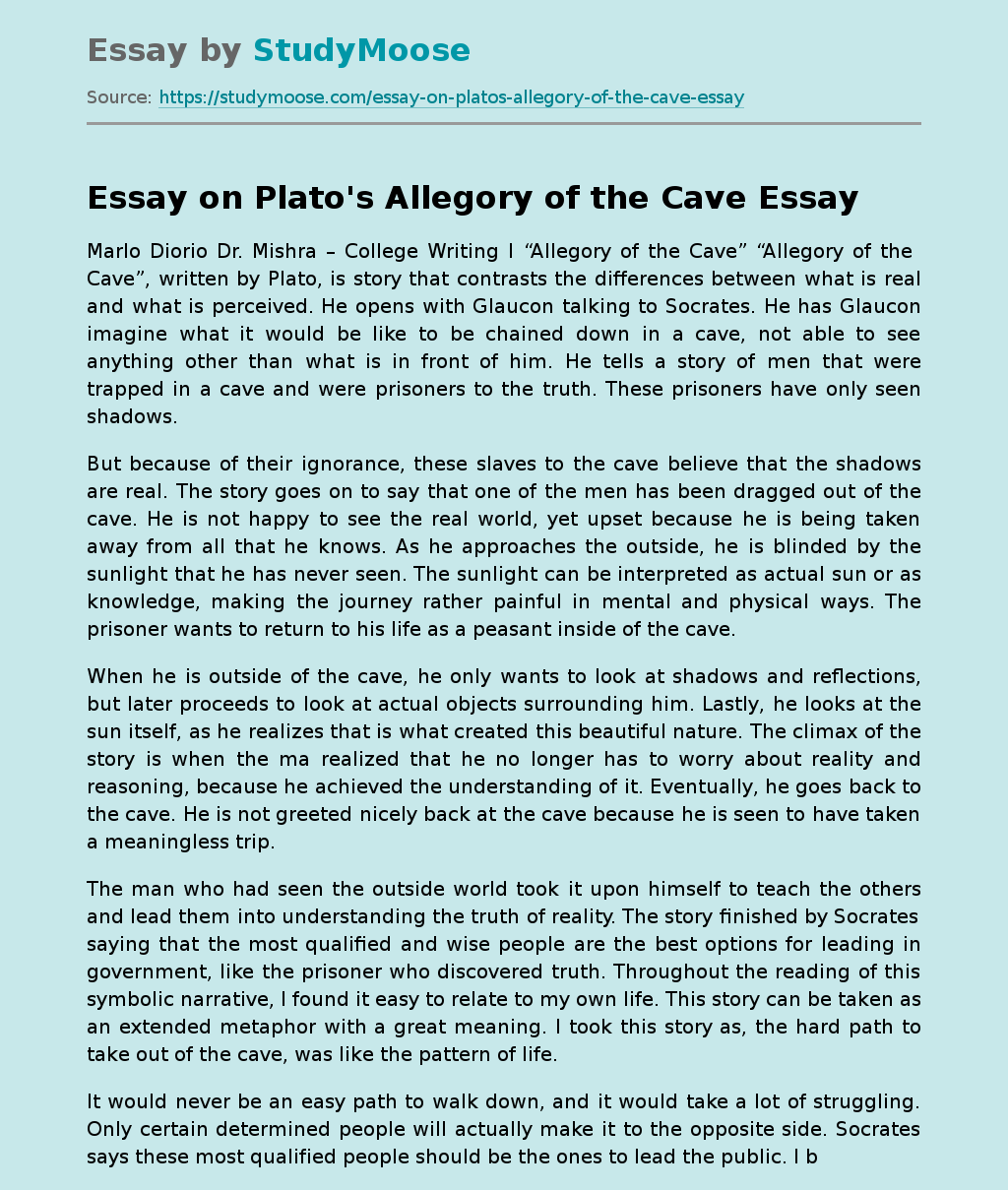