Essay on Bury My Heart at Wounded Knee

It is known how the cowboys won the West, as it is seen in so many films and TV shows that it seems impossible that anyone would not know about these tales. White civilized soldiers moving out of the East coast of the USA, having the wild natives and lands tamed. The wild natives who threatened the sovereignty and peace of the white Americans, on the contrary, Dee Brown paints a different picture, a story told from the other side of the fence, this tale is known as Bury My Heart at Wounded Knee was first published in 1970 and contains the history of Native Americans belonging to the West side of America in the late 19th century.

Don't use plagiarized sources. Get your custom essay on
“ Essay on Bury My Heart at Wounded Knee ”
Get custom paper
NEW! smart matching with writer

The story narrates how the Native Americans were displaced and slaughtered by the Federal Government of United States. Bury my heart at Wounded Knee is the last phrase of a poem called “American Names” by Stephen Vincent Bennet. Brown starts the book by quoting what Columbus wrote to the Majesties of Spain, “So tractable, so peaceable, are these people that I swear to your Majesties there is not in the world a better nation.

They love their neighbors as themselves, and their discourse is ever sweet and gentle, and accompanied with a smile; and though it is true they are naked, yet their manners are decorous and praise worthy”.

(Brown, 5) Though, this did not seem to impress Columbus for long as the author states that Columbus saw this as a sign of weakness on the part of the Native Americans and being a European, he was convinced that the people should be made to work and do everything essential to adopt our ways.

The massacre then continued for the next four hundred years until almost the total extinction of the Native Americans culture and civilization had been carried out.

The Native Americans who are still alive, are proud cultural people residing in the land consigned to them by the government of USA, the land known as ‘Reservations’. The opening chapter of the book is a broad introduction to the hardship to follow, starting with Columbus and the entrance of Europeans in the Caribbean and down the Eastern seaboard. After the introduction, in which Brown explains that massacres and genocide have deep roots in the history of the American continent, even before the Wild West period, we reach the topic itself.

Most of the documented history is of the thirty year period among the 1860s to 1890s. Fresh from the most gruesome era of USA history, when the self caused death count rose to the highest ever the country would experience, the Civil War of America reached a revolving point. As the now unified and stable government had returned, most of the population was charged up with the pioneering spirit and went into the unknown areas of the West, searching for new lives, freedom and quick riches. It was this migration which landed the white man at the doors of an ancient cultured establishment.

The tribes would have to relay on the supplies from the white government and the only thing the Native Americans had to bargain was the land they resided at. Brown has used ancient manuscripts and actual texts of the white men and dominated Native Americans of that time to portray the route taken to acquire the land of the west by false arrests, kangaroo courts, unprovoked attacks, broken treaties and round-ups of Native Americans, forcing them onto desolate lands.

Many series of misunderstandings and blunders contributed to the mass killing of unarmed Native Americans that took place at Wounded Knee. At that 29th December of 1890, as much as 300 Native American men, woman and children were butchered. The following is a paragraph from the book, describing the events that took place at Wounded Knee Lake. “A mother was shot down with her infant; the child not knowing that its mother was dead was still nursing… The women as they were fleeing with their babies were killed together…

and after most of them had been killed a cry was made that all those who were not killed or wounded should come forth and they would be safe. Little boys… came out of their places of refuge, and as soon as they came in sight a number of soldiers surrounded them and butchered them there”. (Brown, 83) As all 19 chapters of the book narrate the battles, events and certain tribes, it is easy to say that Brown wished to go deep into detail which is also obvious with book consisting of 500 pages.

The author has included elements such as quotes, songs and portraits throughout the book to attract the reader. These elements play a strong part by breaking the chain of monotony of pages of texts. The quotes seem to be well chosen and positioned, so are the portraits and help present a well informed picture of the history. Bury My Heart at Wounded Knee assists us to look into our shady past and examines it; the book explores how the white men tried to fulfill our Christian manifest destiny in American history.

The white men are shown as discriminators, murderers and sadists, with the exemption of a few soldiers and civilians. These white men would kill Native Americans despite of gender or age, often mutilating and scalping the bodies, and sometimes even committing horrendous acts such as cutting the genitalia of Native Americans. These extraordinary and appalling revelations give the reader a horrifying image of the birth of the great country known as the USA. Bury My Heart at Wounded Knee has its share of drawbacks such as any other book.

I believe one of the greatest shortcomings is the language the author has used in some parts of the book. Bury My Heart at Wounded Knee becomes complicated and could lose probable readers because of the lack of understanding of the used text. Although the book is an essential for any reader who is interested in history as the book reveals a lot, the vocabulary and writing techniques used may challenge the readers at times. The next drawback is that the book narrates similar tales, just with different tribes, which sends a monotonous tone through the book.

Although, by writing in such a way, Brown indicated and clearly conveyed this influential point that no matter where the Native Americans turned to, they were butchered. With the shortcomings intact, Bury My Heart at Wounded Knee remains a book which wins the heart of readers by telling a tale that is not really understood or identified, a nasty yet important part of the American history. The book is inclusive, yet only narrates the starting of what was being done in the name of war profiteering and manifest destiny. The author asks the reader to confront our history that may make us feel uneasy.

There are always two sides of a story and the author has decided to tell us the story of the side that is rarely heard and spoken of. Brown has indeed achieved the goal he set out when he decided to write an account of this appalling mark of American history in Bury My Heart at Wounded Knee. Dee Brown wrote this book over thirty five years back, to redress and balance the history. This is the tale of the Apache, the Navaho, the Comanche, the Sioux and the story of Sitting Bull, of Geronimo and others. It is hard headedly researched and extremely detailed, at the same time interesting.

The author’s sources of quotes were the journals, courts transcripts and other documents of the Native American people. These words indeed carried an intellectual, beautiful and expressive imagery of these cultural people. Bury My Heart at Wounded Knee is a gloomy story of unkindness, racism, ignorance and prejudice you’ll ever read. The immoral perpetrated against the Native American people are of a scale beyond words, certainly ahead of any words of mine, or Brown’s, or even the arrogant, depressing, gorgeous descriptions of the Native Americans themselves.

Yet, we must carry on to the future, with our evolving societies, knowing that no one can turn back the hands of time. The Native Americans can’t have their heritage, their land, or their way of life returned to them. Even though there is a need for testament for history and for the preserving of knowledge, customs and culture. There is no other way to learn from the past and go forward to our future if there is nothing to build upon. Bibliography Brown, Dee. Bury My Heart at Wounded Knee: An Indian History of the American West. Pocket Books, United States (1981)

Essay on Bury My Heart at Wounded Knee. (2016, Jul 31). Retrieved from https://studymoose.com/essay-on-bury-my-heart-at-wounded-knee-essay 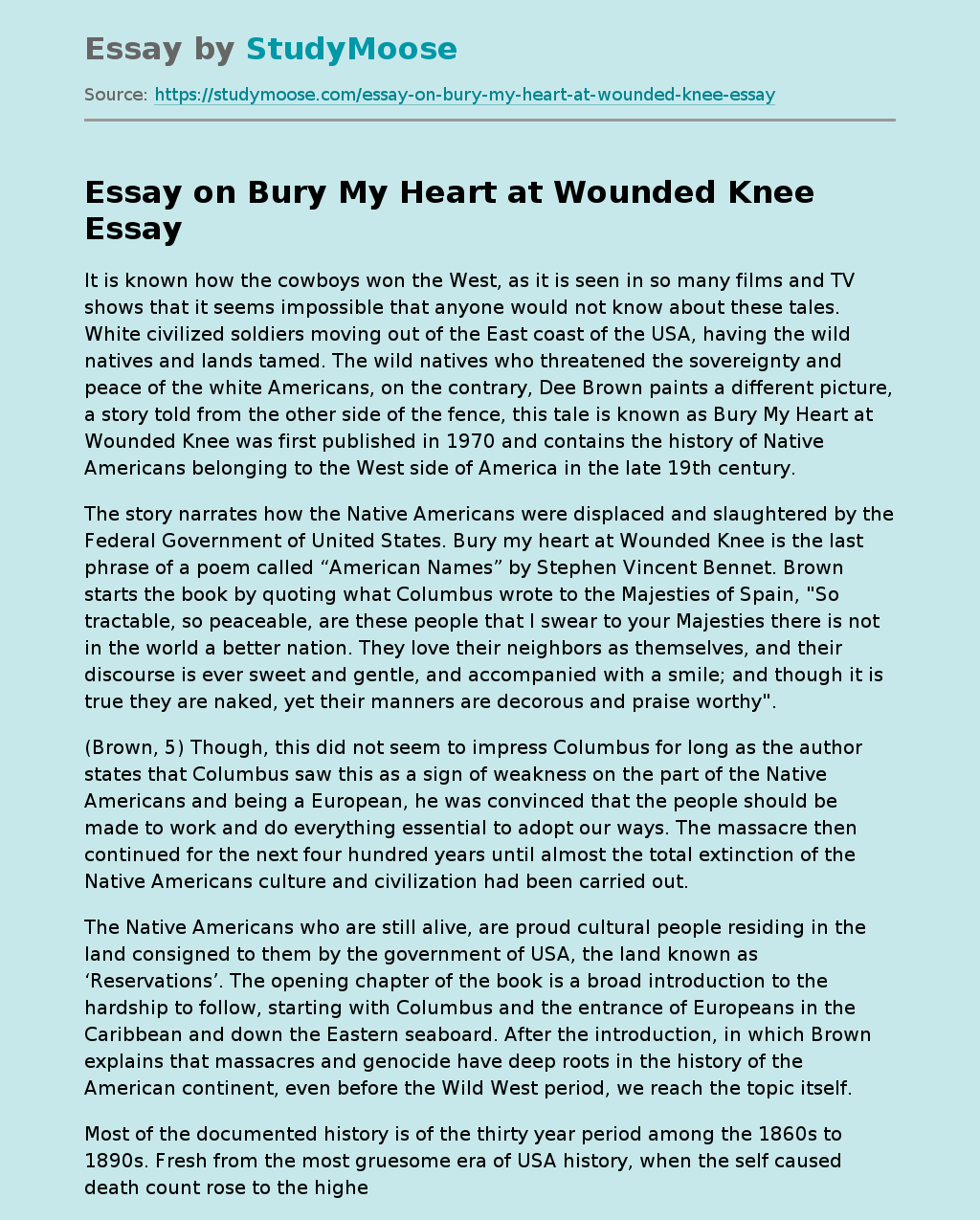