This paper describes the key strategic challenges facing Apple Computer. This paper will also describe the dimensions along which company success can be measured. We will also describe the critical external and internal environmental factors that have strategic implications for Apple’s future. This paper will further explain how Apple’s strategy stands up against industry rivalry. In closing we will provide recommendations to enhance the effectiveness of the company’s strategy or to change its strategic approach for better results.

Don't use plagiarized sources. Get your custom essay on
“ Essay on Apple Inc ”
Get custom paper
NEW! smart matching with writer

We will describe the key strategic challenges facing Apple Computer. We will start with services which contribute minimally to Apple’s revenue but provide enormous influence. Content pricing power- Jobs told Mossberg that digital content can be sold when it’s priced for volume. The success of iTune’s . 99 per song pricing demonstrates this but doing so also destroyed the music industry’s business model.

Without album pricing, musician royalties and major labels CD revenue have dried up.

Regression to the mean- As companies grow, their courage and capacity to “Think Different” abates. While this may sound like heresy relative to Apple history and strong, the uniquely demanding strength and influence of Steve Jobs is integral to Apple’s heart and soul. Now that Steve Jobs is gone, other will step up but none will come close to his legacy. Furthermore, Steve Jobs had a unique way of doing business and would be difficult for anyone to imitate.

Past issues such as option backdating and disclosure failures regarding his personal health will have larger consequences in Apple’s wider world.

Security- With just 5% market share in the PC market, malware and virus writers have mostly ignored the Mac. Now with the success of Apple’s iPhone it will make them a target that coincides with the explosion of mobile security concerns overall. Lacking strong experience in the enterprise computing where security is paramount, it’s reasonable to expect more problems such as the recent AT&T email address breach on the iPad.

Apple will definitely have to stay ahead of the people that spend hours and hours trying to compromise what they are building. Increased competition and stakeholders- Today it’s Apple vs. Google, HTC, Samsung, RIMM, Sony, Amazon, Electronic Arts, PC, government agencies, etc. In contrast to the last gasps of the music industry after ineffectively combating piracy, these are healthy, vibrant companies with plenty of smart people, money, lawyers and lobbyists. They will go to great lengths to protect their business as well as challenge Apple in new business ventures.

High control- Several years ago, Steve Jobs said Apple wasn’t going to do a phone because it had to be sold and controlled through the “four orifices” referring to the major cellular service providers. Jobs told Walt Mossberg that their entry into cell phones was driven by AT&T’s unprecedented willingness to give Apple control over what was on the handset. Individual customer primacy- During the Mossberg interview, Jobs was ebullient about making products for consumers over the enterprise.

He relishes the fact that his users vote directly with their wallet vs. the multiple stakeholders that must be satisfied before corporations can buy. Can Apple maintain this end user focus as they enter new businesses such as mobile advertising where the customer who pays for the ads or the developer who receives some revenue is not the end user? Content pricing power- Jobs told Mossberg that digital content can be sold when it’s priced for volume. The success of iTune’s . 99 per song pricing demonstrates this but doing so also destroyed the music industry’s business model.

Without album pricing, musician royalties and major labels CD revenue have dried up. This will continue to be a problem as Apple move forward into an entire new era. Regression to the mean- As companies such as Apple continue to grow, their courage and capacity to “Think Different” still remains. While this may sound like heresy relative to Apple history. The uniquely demanding strength and influence of Steve Jobs is integral to Apple’s heart and soul. Others will step up when he leaves but they will not replicate him. Furthermore, when Jobs’ strengths are overdone, errors occur.

Past issues such as option backdating and disclosure failures regarding his personal health will have larger consequences in Apple’s wider world operation. Dimensions along with company success is measured Apple company success is measured by its foundation. In 1976 the company introduced the Apple I microcomputer. The machine became popular with hobbyists, but it had little commercial use. In 1977, the company brought out Apple II, a home and small business computer. The machine was an immediate success. Apple Inc (2011).

Apple’s continued success lies in careful and thoughtful strategic management of these complex issues and challenges Brain Mass (2011). Critical external and internal environmental factors Internally, using the company’s core competencies in different product markets decreases Apple’s dependence on revenues from a single market. Related diversification allows the company to share resources, activities, and technologies across product lines, and the transfer of skills and intangible core competencies can build a competitive advantage that is difficult for rivals to emulate.

According to Apple Inc (2011), external to the company, Apple’s most pressing challenges emanate from the industry and competitor environments. A multitude of existing and new competitors is poised to battle for market share and requires continuous attention from the company’s leaders. It is common for competitors selling personal computers based on other operating systems to aggressively cut prices and accept lower product margins to gain or maintain market share. This puts continuous downward pressure on Apple’s margins.

The company’s music products and services also face significant competition from firms promoting their own digital music and content, including some who offer free peer-to-peer music and video services. Apple currently dominates this market, retaining a competitive advantage based on superior innovation and solution integration of hardware, software, and content distribution. However, the competitive rivalry in this arena is expected to intensify as competitors imitate Apple’s approach and tightly integrate their own offerings to appeal to consumers.

Probably most threatening to the company’s position is potential collaborations between competitors and content providers to offer integrated solutions that produce more value or exclude Apple from access to content. Strategy against industry rivalry Apple Computer’s business strategy leverages the company’s unique ability to internally design and develop operating systems, hardware, application software, and services to deliver superior new products and solutions which are differentiated by their ease-of-use, seamless integration, and innovative industrial design. 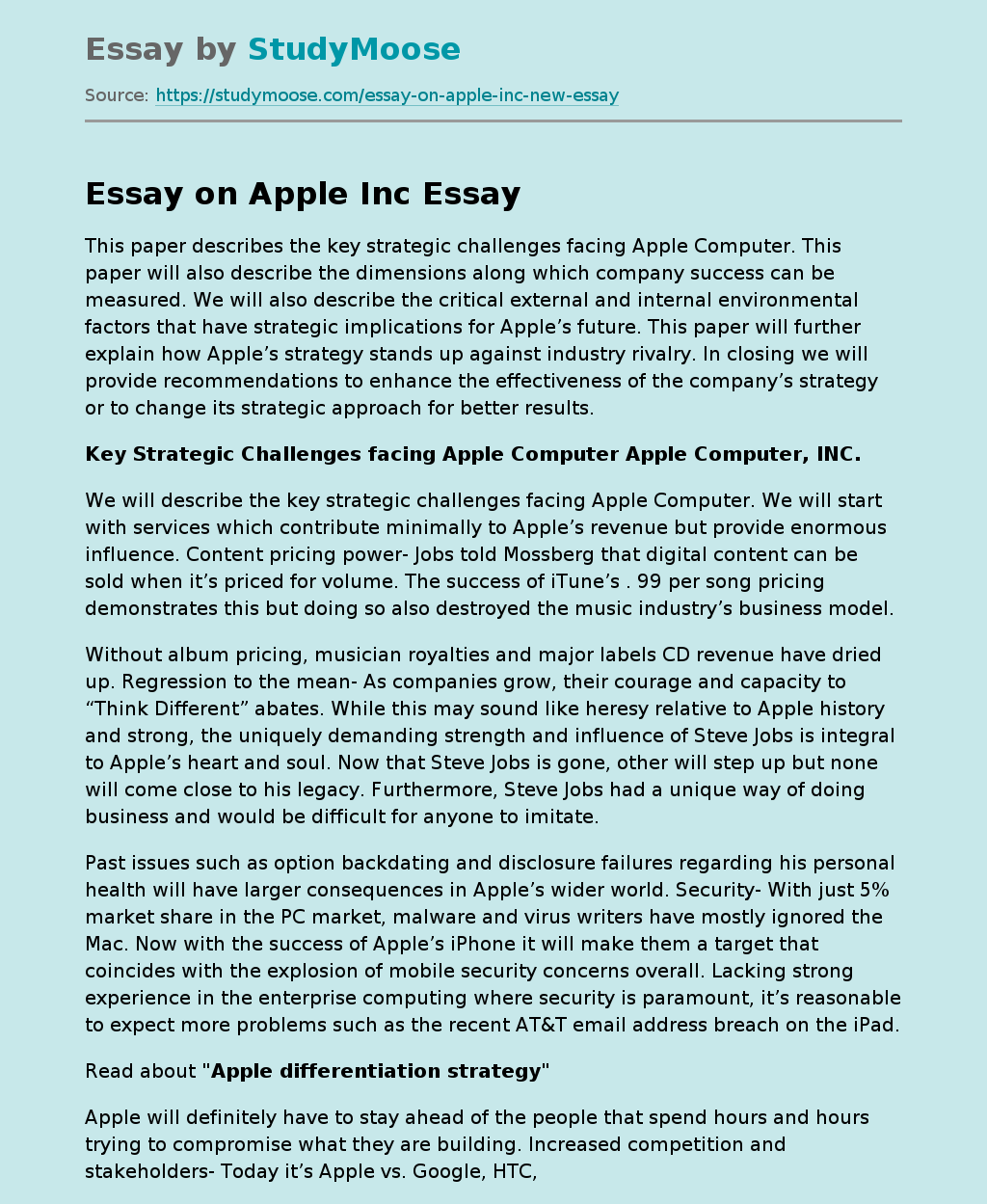