Essay on an Analysis of Horror Movies

Horror has been a long time one of the most popular categories of films in the movie industry. People liked to watch horror films to be afraid and to outdo their fears: “On a psychological level, the horror film dramatizes our nightmares, so that we can confront them” (Sigmund Freud, p.644). Gradually, because horror films became too repetitive and too numerous, people got used to watching them and were no longer terrified. Even if horror films do not scare us, why do we continue to watch them? The reason is very simple: horrors films became so unrealistic, so ridiculous and, in return, very funny to watch.

Don't use plagiarized sources. Get your custom essay on
“ Essay on an Analysis of Horror Movies ”
Get custom paper
NEW! smart matching with writer

Firstly, this essay will focus on how the serial killer (the bad guy) is ridiculous by his invulnerability, due to his power. Secondly, it will focus on how the characters are ludicrous, silly by their stupidity and on the setting which is over-exaggerated. To conclude, it will be shown how the female portrait is so demeaning, unrealistic and absurd.

Examples from horror films Nightmare on Elm Street 3, Friday the 13th (Part 8) and Freddy VS Jason will be used to prove these points.

First of all, the serial killer (bad guy) in horror films is most of the time very powerful, very strong and seems invulnerable to injuries from their victims. For example, in a scene from Friday the 13th (Part 8), a young black teenager tries to escape from Jason by going on the roof of a building. Of course Jason finds him and, seeing that he is trapped, the young boy decides to fight Jason with his fists.

He incessantly punches Jason, yet the serial killer does not seem affected. Tired, the boy stops to hit and Jason punches his head causing it to fall off and fly through the air. It is funny to see this absurd scene which is impossible to do in the real life. “The horror film offers to see all kinds of frightening events, to feel something of the same fear and terror as the characters on the screen, […]” (Ira Konigsberg, p.469).

There is nothing frightening in this idealistic scene because the killer is too strong, too ridiculous and people will laugh. Another example of ridiculous killers is Freddy Krooger. “Freddy is most like a comic book superhero – aggressive, resourceful, and unbeatable – he gets what he wants. Freddy says, “I am eternal,” and he can become anything he wants: a bathroom, a puppet, a showerhead, a motorcycle, a diving board, a huge snake, a cartoon character, and so on. His identity is one of absolute power. […]Stalkers like Freddy, Jason, […] cannot be stopped.”(Gary Heba, p.106) In short, the evil character (Jason, Freddy, etc.) in horror films are always ridiculous and funny to watch because they are too powerful, too strong and too invulnerable.

Also, the characters and the settings are other elements which make horror films so hilarious. Most of the time, the characters have stupid reactions while dealing with the murderer. By example, in a scene of Freddy VS Jason, a girl teen escapes from Freddy in her dreams. She enters in a big room and hides herself in a locker thinking that Freddy will not find her. She is so noisy that Freddy easily finds her and kills her. Everything seems to occur by chances in horror films but is calculated in reality. For example, in Friday the 13th (Part 8), a young woman escapes from Jason in the woods, falls and finds a knife on the ground that she picks up to defend herself. The chances that it happens in the real life are very minimal. In a few words, the characters are often unrealistic by the way they act and the setting is too calculated. These things make horror films out of reach and very witty.

Another factor that makes the horror film so unrealistic and not scary is the female portrait. In horror movies, most of the ladies are very hot and are often naked. Women are perceived as sexual objects because they are usually used in sexual scenes to attract the attention of the male audience. The girls seem to have all their assets in their body and none in their head. Generally, the slaughterer in horror films is a male and most of the victims are young women. “Critic and researchers have claimed that movies such as Friday the 13th, Nightmare on Elm Street, […] feature acts of extreme violence […], women singled out for injury and death […] and scenes of explicit violence juxtaposed with sexual or erotic female images.

It has been argued that females are more frequently the targets of violence in slasher films.”(Barry S Sapolsky, p.28). For example, in the Friday the 13th (Part 8), there is a couple who are having sex in a boat. Quietly Jason goes aboard the boat, picks up a harpoon gun and goes in the bedroom where the couple is. Quickly he harpoons the couple who was copulating. To sum up, the female portrait is very demeaning in horror films and it makes these films very absurd, improbable, unintelligent and very comical to watch because the women would never act as ridiculously in real life.

To sum up, people like and continue to watch horror films because they are ridiculous, unrealistic and very funny in return. Many factors make these films like that: the serial killers who are always too powerful, too strong and too invincible (like Jason Voorhees and Freddy Krooger); the characters who act so stupidly and the setting that is so improbable; and the female portrait which is very demeaning because the women are perceived most of the time as sexual objects; most of the women are not like that in the real life. Maybe one day the movie industry will understand that people want to be scared when they go to watch a horror film and not to burst out in laughter.

Essay on an Analysis of Horror Movies. (2016, Jul 19). Retrieved from https://studymoose.com/essay-on-an-analysis-of-horror-movies-essay 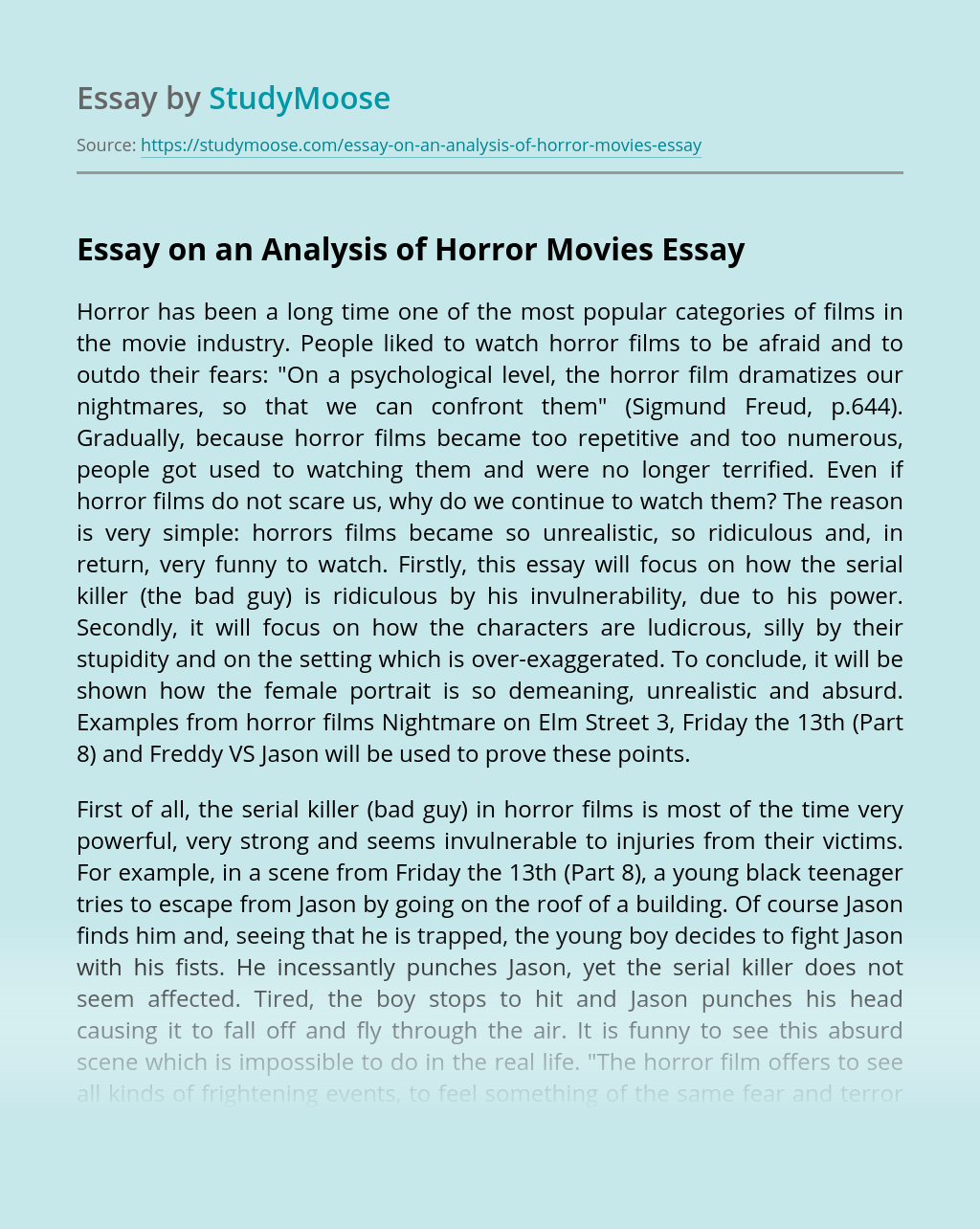