Essay of the Ideology and Social Base of Bharatiya Janata Party

Turn in your highest-quality paper
Get a qualified writer to help you with
“ Essay of the Ideology and Social Base of Bharatiya Janata Party ”
Get high-quality paper
NEW! AI matching with writer

The party adopted four fundamentals one country, one nation, one culture and a rule of law that would determine its future course of action Nehru described the party as its “Illegitimate child.” Professor Rasheeduddin Khan has rightly remarked, “The BJP has prints of continuity with the Jana Sangha, in its discipline and well knit organisational set up and units linkage with the traditional Hindus socio-cultural organisations, the RSS and the VTTP.

The BJP’s support base is essentially the same as that of the erst while Jana Sangha. It is a party of the urban educated Hindu middle classes professionals, small businessmen and white collar workers. In Gujarat, Maharashtra, Delhi and Rajasthan BJP is the ruling party with charismatic leaders like Suresh Meheta, Gopinath Mundle, Mandas Lai Khurana and Bhairon Singh shekhawat. But BJP’s most impressive performance was in Karnataka, U.P. and Gujarat in 1991 election. In all these states the BJP vote went up by over 20%.

In 1967, the party gave its full support to the SVD ministry in U.P headed by Charan Singh and it had 98 members in the Vidhan Sabha. In 1977, with 98 of its men in parliament under the Janata banner it received only three cabinet ministership. In 1980 the party backed Jagajivan Ramand in 1983 with their 18 members in the Karnataka legislature the BJP supported R.K. Hegde who was then of a minority The BJP bore V.P. Singh on its shoulders after he formed the Jana Morcha. In 1984 during its worst showing only 2 Lok Sabha seats it still polled 7.4% of the national votes ahead of the Janata’s 6.7 percent and the Lok Dai’s 5.6.

The BJP believes in Gandhian socialism. The party says that its socialism is inspired not only bi Gandhi and JP but also by a Deen Dayal Upadhyaya. It stands for positive secularism and clean government while laying emphasis! on the ‘Hindus Idiom’ on its poll manifesto, the party stands for justice for all and appeasement of none. Policy of reservations for the scheduled castes and scheduled tribes apply the same policy to the backward castes broadly in line with the recommendation of the Mandal Commission. The party also favours smaller and stronger states desires to abolish Article 370, favours uniform civil code and would like to establish Human Rights Commission.

The Jana sangh has been closely associated with the RSS. The RSS has served as the organizational base for the party. The BJP being its successor, what type of relationship it has with the RSS? The official stand of the BJP and the RSS is that those are two separate organizations working in two different -fields. Besides they do not interfere in each others work. But an over whelming majority of the BJP workers have RSS background. Therefore a large number of people think that the two organizations belong to the one and some family. Even the BJP has reaffirmed its RSS link. It seems this link as vital to its newly emphasized commitment to national unity since it believes that the RSS’s patriotism is unmatched. It is’ in fact proud of its link with RSS. The BJP is now being viewed as an alternative to the century partoes that have so far had a monopoly on power.

Essay of the Ideology and Social Base of Bharatiya Janata Party. (2016, Mar 22). Retrieved from https://studymoose.com/essay-of-the-ideology-and-social-base-of-bharatiya-janata-party-essay 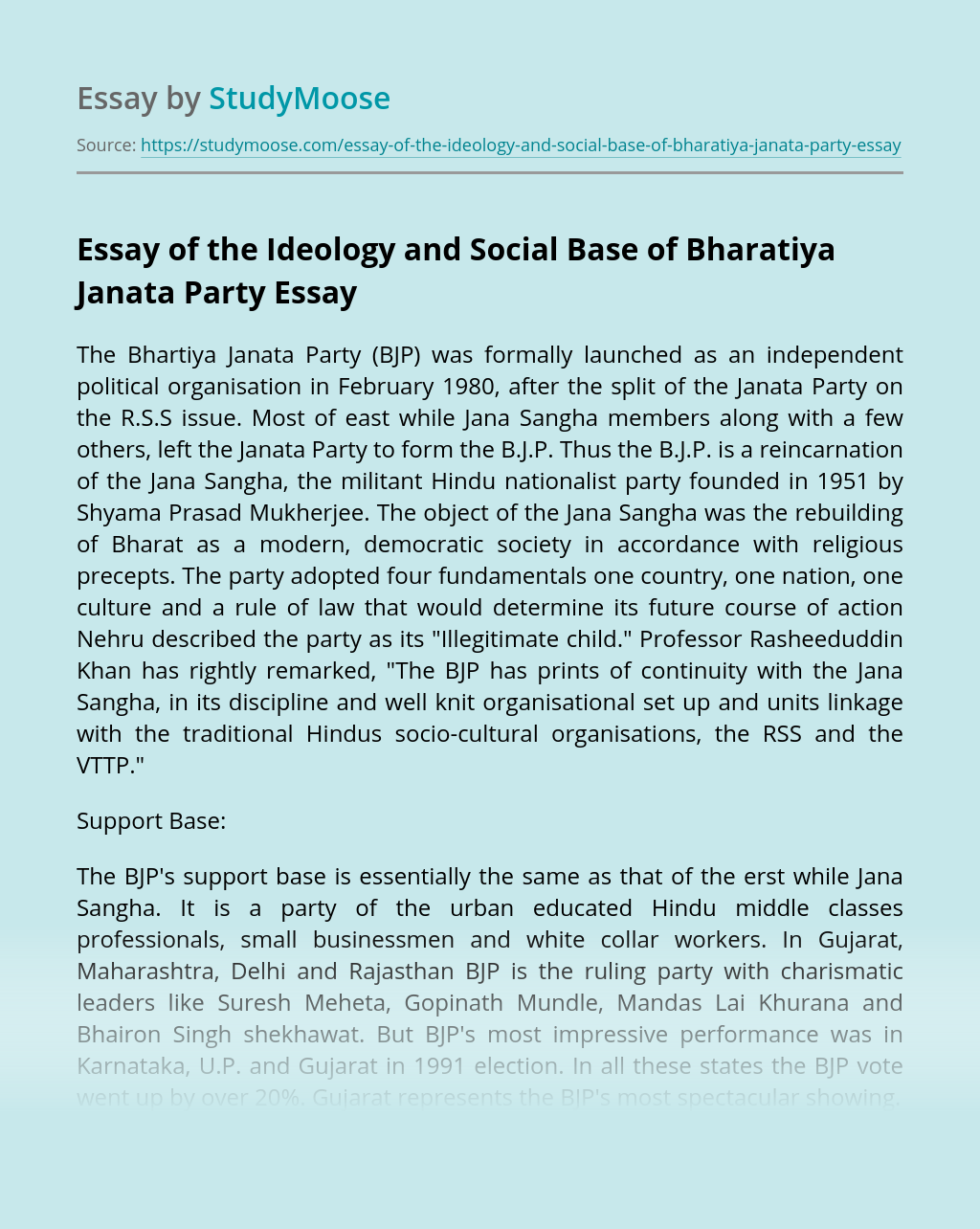 Turn in your highest-quality paper
Get a qualified writer to help you with
“ Essay of the Ideology and Social Base of Bharatiya Janata Party ”
Get high-quality paper
Helping students since 2015
Stay Safe, Stay Original