CROOKS QUOTES FOR DISCRIMINATION
“Listen Nigger” this is a prime example of discrimination because of Crooks race “Cause I’m Black” this is yet another example of Crooks being discriminated as he replies to Lennie asking why he’s not allowed in the bunkhouse.

Don't use plagiarized sources. Get your custom essay on
“ Essay notes of mice and men discrimination ”
Get custom paper
NEW! smart matching with writer

“This is just a nigger talkin” here Steinbeck uses Crooks to show understanding the positives and negatives of being black e.g. no one will hold you for your actions.

“The boss gave the stable buck hell” and “stable bucks a nigger” these two quotations emphasises the theme of discrimination of Race and how the context relates to how people were treated. (Slavery) “he woulda killed the nigger” here Candy is remembering a past memory but this is also links to the context of slavery. Here Steinbeck uses Foreshadowing as Curley’s wife dies later on in the novella.

The name “Crooks” is a name given to the stable buck by Steinbeck because of his back which his discrimination of race which is why Steinbeck does not reveal his name as Steinbeck has the opinion that he is irrelevant.

“Guys don’t come into a coloured man’s room” here Crooks explain to Lennie how he is a victim of discrimination.

LENNIE QUOTES DISCRIMINATION
“crazy bastard” here George describes Lennie as “crazy” which reinforces why Lennie is mentally impaired. “Why ain’t you wanted?” Here Steinbeck shows lennie’s mental impairment to readers as he does not fathom the idea of racial discrimination. “you’d drink out of a gutter” here George emphasises Lennie being mentally impaired as George has the opinion that Lennie is not very sagacious.

CANDY QUOTES DISCRIMINATION
“They let the nigger come in” I can imply from this quote that Candy is relishing discrimination by joking about Crooks, which is ironic as he is also a victim of discrimination. “I been here a long time” this quote could suggest that Candy is a victim Ageism as Candy describes his time in Soledad as “long” which gives the image of old age. “wrist stump” this quote is an image which Steinbeck uses to show Candy’s disability. CONTEXT

In the ranch where Lennie and George worked on was in Soledad, California which was where people went to chase their dreams it was known as the place of dreams. The Great Depression occurred between 1930-1936 meaning that most people were unemployed and money had been lost while banks had gone bust. This would have meant people who were discriminated e.g. disabled people or black people this could suggest that it was harder for them to live. LITERARY DEVICES

SYMBOLSIM – rabbits representing Lennie’s dreams of owning land. IMAGERY – Steinbeck uses imagery before the introduction of each character to give them definition from one another and give the reader insight to what sort of character archetype they are . SIMILIE – “and flies shot like rushing stars.” This simile is used to show the conditions of the bunk house and how the workers were connected to nature.

METAPHOR -“Lennie dabbed his big paw in the water” Lennie is metaphorically referred to as a bear because of his large structure and his crushing strength. FORSHADOWING -All of the dead animals throughout the book, except Candy’s dog ; With every chapter, the death of living things increase in size, starting from a mouse, to a rat under the floorboards, to a puppy, to finally Curley’s wife and Lennie. Each death leads to a bigger one, foreshadowing that eventually, someone would die.

Essay notes of mice and men discrimination. (2016, May 13). Retrieved from https://studymoose.com/essay-notes-of-mice-and-men-discrimination-essay 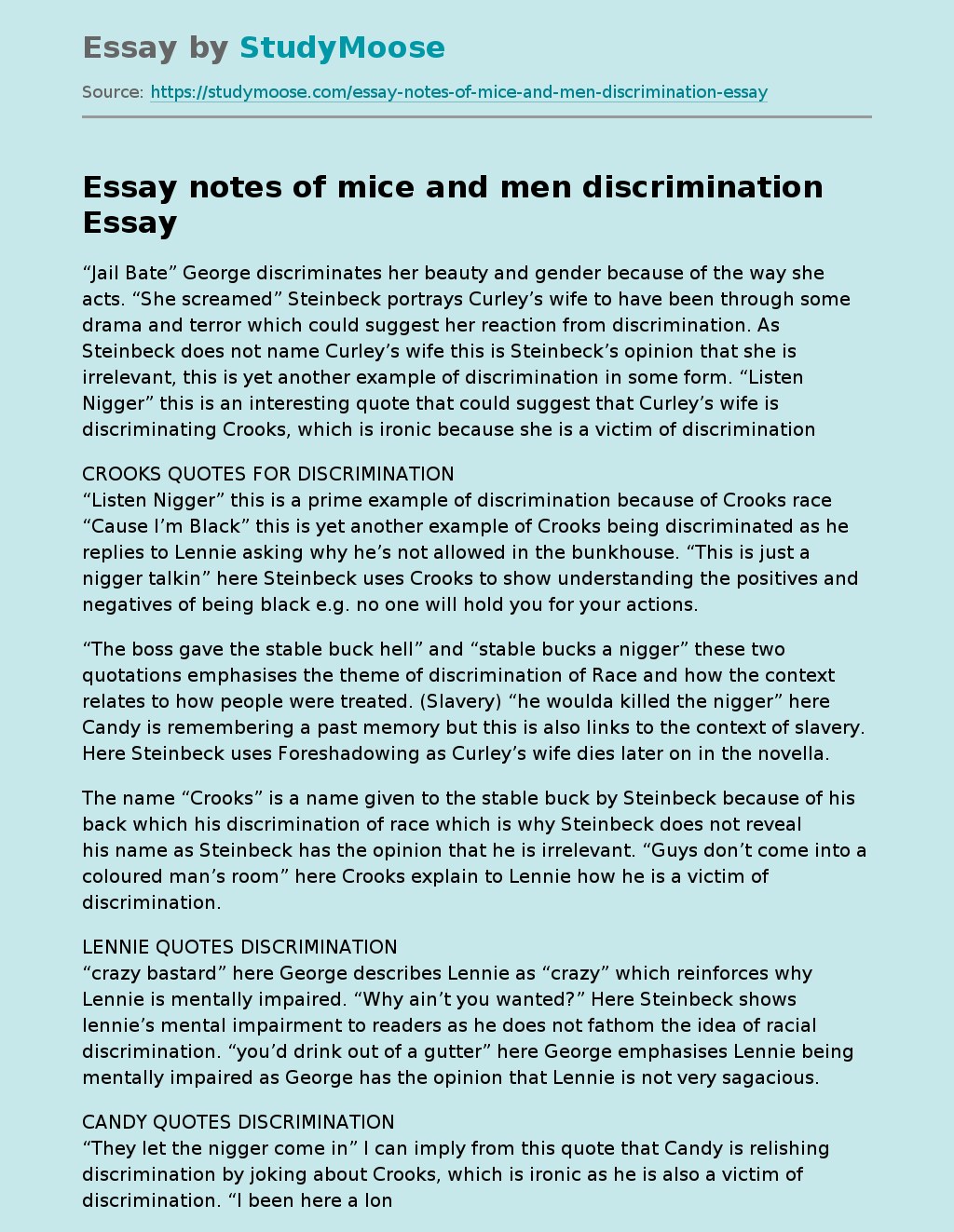