Essay about the song Stan by Eminem

Stan is a hip/hop song by the American rapper Eminem. The song is about a guy called Stan, who’s insanely obsessed with his big idol Slim, also known as, Slim Shady who’s Eminem’s alter ego. Through the song Stan writes several letters to Slim to get in contact with him, but Stan never receives an answering letter back from Slim. It ends up with Slim putting his pregnant girlfriend in the trunk of his car, with the purpose of driving off a bridge to commit suicide.

Don't use plagiarized sources. Get your custom essay on
“ Essay about the song Stan by Eminem ”
Get custom paper
NEW! smart matching with writer

“Stan” is a fictional story containing four verses, with a hook between each verse. The song also contains a feature by Dido, who’s an English singer-songwriter, who sings every hook in the song. Dido is in the song symbolizing Stans girlfriend. The first verse is Stan writing a third letter to Slim.”I sent two letters back in autumn, you must not’ve got em. There probably was a problem at the post office or something.” After this he goes on asking Slim how his daughter are doing, because Slim’s going to be a father soon, and he therefore thinks that they have something in common.

Stan is also talking about that he’s, Slims biggest fan, and that he got a room full of pictures of him. The second verse is Stans fourth letter to Slim. Stan is now getting a bit upset because Slim still haven’t answered him on his letters.

He writes to Slim that he’s mad that he didn’t say hello or wrote an autograph to Stans littlebrother, when he and his brother, went to one of Slims concerts. Once again Stan also writes about how he can relate to Slims life, because Eminems father left him and his family before Eminem had turned two, and Stan claims that he’s in the same situation. “I never knew my father neither. He used to always cheat on my mom and beat her. I can relate to what you’re saying in your songs. So when I have a shitty day, I drift away and put em on.” Maybe the reason why Stan is so unstable is because what he has been through. I believe that the reason why Stan is getting more and more obsessed in getting contact with Slim, is because the songs aren’t enough anymore. Stan also mentions that his girlfriend is very jealous because he always talks about him.

The third verse is the point where it all slips for Stan. He can’t take it anymore. His extreme obsession with Slim, that almost seems like he’s in love with him, has gone to far. He’s now so focused on getting away from everything and maybe also wants to take revenge of Slim in some way, when he says: “I loved you Slim, we coulda been together, think about. You ruined it now, I hope you can’t sleep and you dream about it” and “I hope your conscience eats you. And you can’t breathe without me.”

It seems like since Slim isn’t answering him, Stan doesn’t have anything else to live for, and if he commits suicide, then will Slim for sure find out about him. I believe Stan’s goal is to make Slim feel bad and guilty of death of Slim, his girlfriend and the unborn child. And in that crazy way Slim will finally give some attention to Stan, but that doesn’t matter anymore, when he’s dead, and I don’t think that Stan has realised that. In Stan’s rush of getting to the bridge, while recording the tape to Slim, he forgets that he wont be able to send the tape if he drives off the bridge. But it’s too late. “Well gotta go, I’m almost at the bridge now. Oh shit I forgot, how am I supposed to send this shit out?”

The fourth and last verse is the verse where Slim answers Stan. Stan explains that he couldn’t write to Slim before now, because he’d been busy. He apologize that he didn’t see him and his brother at the show, and as an excuse he writes an autograph on a Starter cap, which he wants to give to Slims brother. In one of the previous letters from Stan to Slim, Stan says that he likes to cut his wrist. Slim comments on this by saying: “But what’s this shit you said about you like to cut your wrists too? I say that shit just clowning dog, come on, how fucked up is you.

You got some issues Stan, I think you need some counseling.” Counseling is exactly what could have saved him, as the listener already now at this point. Slim also writes: I hope you get to read this letter, I just hope it reaches you in time. Before you hurt yourself, I think that you’ll be doing just fine if you relax a little.” As the listener also knows at this point, the letter doesn’t get to Stan in time. In the last part of the verse and the song Slim realizes what has actually happened: “I just don’t want you to do some crazy shit

I seen this one shit on the news a couple weeks ago that made me sick  Some dude was drunk and drove his car over a bridge
And had his girlfriend in the trunk
And she was pregnant with his kid
And in the car they found a tape, but they didn’t say who it was to Come to think about it, his name was, it was you, damn”1

The reason why I chose a song is because it’s something else than writing about a book, a movie or an article, as you often do. I have a great love for the music genre hip-hop/rap, and the reason why chose this exact song, is because it’s different from many other hip-hop/rap songs. A typical hip-hop/rap song is about weed, money, girls, power, cars, parties and stuff like that, but this song actually tells a story. And that’s why I chose this.

Essay about the song Stan by Eminem. (2016, Aug 21). Retrieved from https://studymoose.com/essay-about-the-song-stan-by-eminem-essay 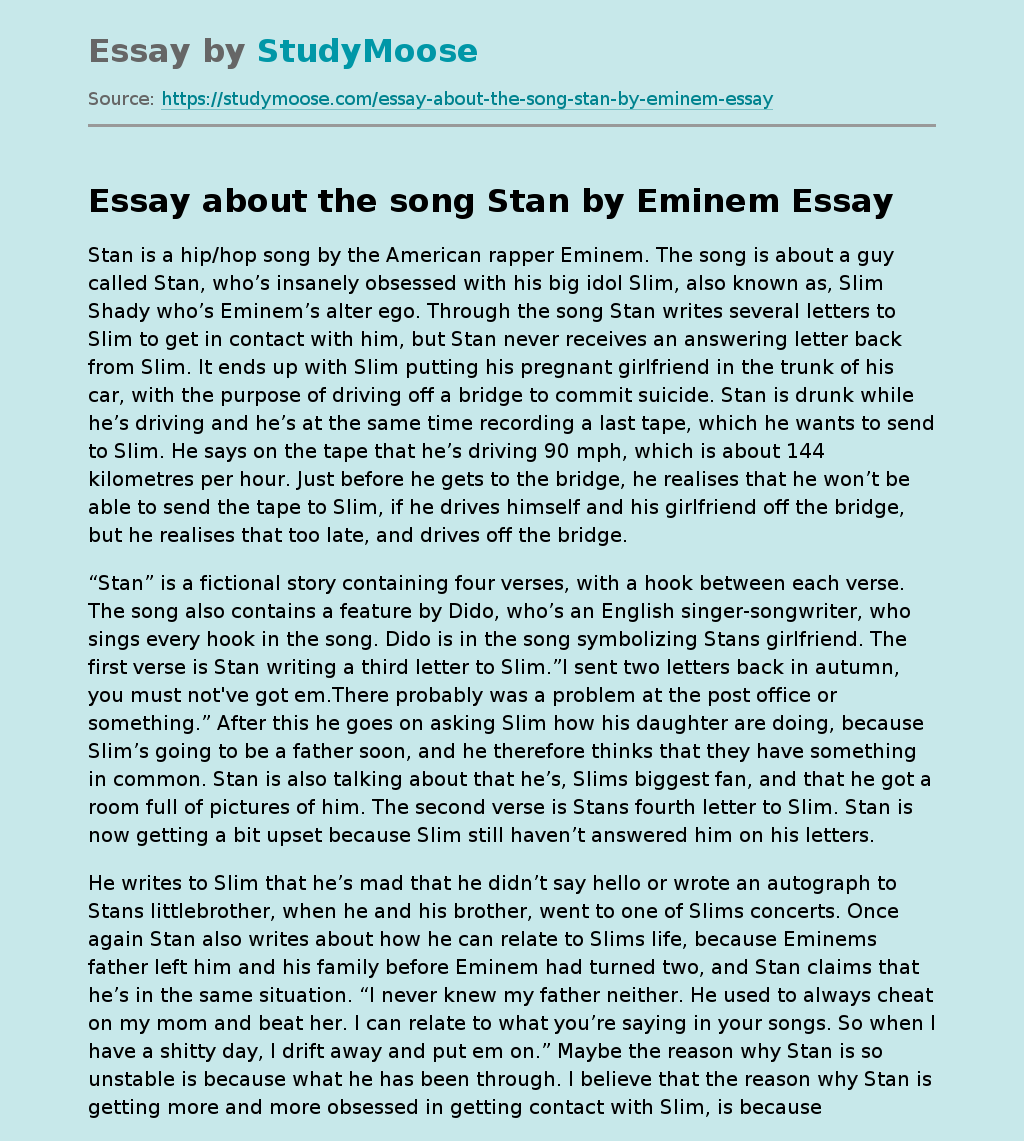