Essay About The Life of Albert Einstein

As everybody knows, Albert Einstein has been a role model for decades. We hear about him through travel, we learn about him at school, and most importantly, we know of him because of the many provisions he has made in connection with modern day knowledge and beliefs. His theory of relativity helped pave our understanding of space, gravity, time, and most important of all, the universe. He contributed to the pillars of modern day physics, and also has had well known influences on modern day philosophy.

Don't use plagiarized sources. Get your custom essay on
“ Essay About The Life of Albert Einstein ”
Get custom paper
NEW! smart matching with writer

Most would consider him as being one of the greatest men to walk the Earth. Nonetheless, the focus of this paper will be to enlighten the life of Albert Einstein, and cover the many ways mathematics came into his focus and the ways he has applied it to many modern day visions.

Albert Einstein lived in Switzerland from the years of 1895-1914. In 1896, Albert Einstein renounced his German citizenship and was stateless until he became an official Swiss citizen in 1901.

When we consider Albert Einstein we would think that from an early age this individual must have excelled through school and absorb information at a faster rate than most students. In reality though, Albert Einstein had difficulties in school and had a very hard time with verbal communication. His family talked with a doctor when he was a young child to try to figure out why he had such trouble speaking.

Despite the fact that he struggled verbally he often pondered about things that most individuals would take for granted, in this case, time and space. This eventually led to his later discoveries and theories about the space time continuum.

A typical misguided judgment is believed to be that, Einstein failed mathematics in school. This is a false assumption given that when he was a kid, mathematics was one of the subjects Albert Einstein exceeded in the most. Before Albert Einstein turned fifteen, he had already mastered integral and differential calculus. In elementary school, he was at the highest point of his class and surpassing all of his classmates at a disturbing rate. One summer Albert Einstein wanted to surpass in his math studies and decided he would attempt to learn Geometry and Algebra on his own. As a result, Einstein’s Mother and Father bought him the textbooks to study over his summer break and he began to teach himself basic Algebra and Geometry.

For a few years, most of the experiments Albert Einstein conducted were done in his head, also referred to as a “thought experiment”. These thought experiments drove him to his many visual portrayals of how equations are present in aspects of reality. Through this way of thinking, this led Albert Einstein to his renowned Theory of Relativity alongside a number of other physics based mathematical understandings.

This leads us to Albert Einstein’s significant commitments to the world of mathematics. With relations back to his thought experiments, this would give light to a portion of the equations he produced as a mathematician. Many people know of the equation E=mc2. Most of the people who have heard of this equation, do not quite understand its relativity that it has to modern science and mathematics. This equation states that: The increased relativistic mass body, multiplied by the speed of light squared, is equal to the kinetic energy of that object.

With respect to Einstein’s equations, the vast majority of them related to the fundamental interactions of gravitation because of spacetime being curved due to energy and mass. This might get you thinking, why is this relative if these equations do not directly correspond with modern day mathematics that we find out about in school? To respond to this question, these mathematical equations are utilized however are not taught unless you plan on going into studying nuclear science or other unique science studies. However these equations also offered an understanding to a fair amount of other equations relating to algebra, trigonometry and calculus.

Another well known equation that Albert Einstein came up with is g= n + h. This equation relates linearized gravity as a relatable theory in general relativity. This equation is very significant because it is relating nonlinear contributions from the spacetime continuum to gravity. Equations like these, have shed some light on the research and discovery of our universe. Without these equations we would not be able to understand most of what we know about our universe today.

To conclude, Albert Einstein gave birth to some of the most complex and complicated questions relating to nuclear science which also gave birth to more basic mathematical equations. Looking back on these equations we can get a better understanding of what our future holds and what Albert Einstein attempted to accomplish with his works and studies. Overall, the contributions that Albert Einstein made to mathematics are unprecedented and have further pushed the human race to explore unsolved and unexplained problems we face today.

Essay About The Life of Albert Einstein. (2021, Aug 09). Retrieved from https://studymoose.com/essay-about-the-life-of-albert-einstein-essay 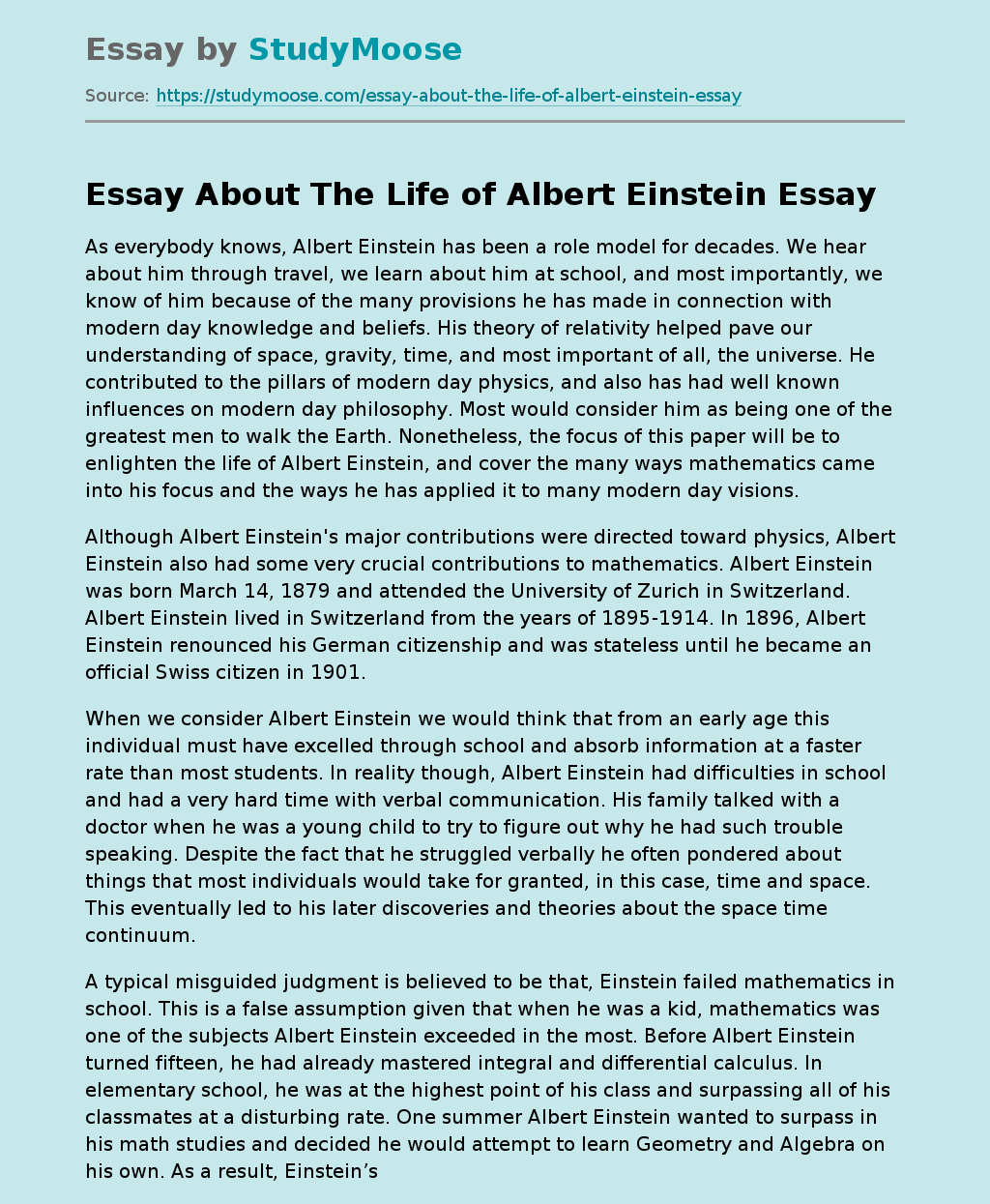