Don't use plagiarized sources. Get your custom essay on
“ Essay about Defining Humanities ”
Get custom paper
NEW! smart matching with writer

According to the Humanities Association (2009), “humanities is about people; how people create the world they live in; how the world they live in makes them the people they are” (para. 2). Humanities express the concern in human life and illustrate how it relates to its historic times. Distinguishing the humanities from other modes of human inquiry and expression shares a comprehensive appreciation of the human form, whether it is the study of art, music, architecture, philosophy, literature, or any other individual venture.

Other modes of human inquiries are about studying non-human objects. It differs from others that exercise a pragmatic approach. In other words, expressions with humanistic senses are supported and can be observed. Cultural Events Collectively, humanities are about the human race and how people have survived over time through political, socioeconomics, and technological changes. Culture is a dominant individual tool for survival, but it is also a delicate observable fact. It is consistently evolving and easily displaced because it exists only in our minds.

Last year, the author of this paper had the pleasure of attending the Texas Renaissance Festival in Plantersville, TX.

The festival is one of the nation’s largest, most recognized Renaissance fair where the things to see, sounds, tastes, and exquisiteness of the 16th Century come alive every weekend for eight weeks. The fair displays several forms of expressions in art, theater, dance, music, and literature. There are also themed weekend which allows a brief glimpse into the world during a particular era.

The Texas Renaissance festival is an expression of how certain aspects of life were dealt with in past centuries. It gives an all access weekend into the life of traditional living, coupled with food and replica artifacts for sell during the focused period. It started showcasing in 1974 and today features over 500 costumed performers and 15 performance stages. The music played around the fair emphasizes emotions and projects individual experiences into rhythmic words. For example, during the Roman Bacchanal themed weekend, it features entertainment that includes the sounds of ancient Rome.

All music is forms of an “art form” and is only an outline of expression. Contrary to what music was like centuries ago, the direction it has taken now takes on a whole new meaning. There are different genres such as rock, pop, classical, jazz, opera, or hip-hop. They are released to society in the variety of ways such as compact discs, digitized musical downloads, or in person concerts. Some individuals of society believes music is controlling and manipulating; however, some individuals beg to differ denoting it has positive socioeconomically results and is art.

The works of literature displayed at the fair is impeccable. It is in the form of imaginative works including short stories, poems, or plays, which are performed on stages around the fair grounds. Words in humanities can be written to describe the story of past events. Conclusion The study of humanities used to figure out the differing explanations of being existence and the past. Today’s civilization would be gone astray without the learning and use of humanities.

If humanities did not exist, society and future generations would not understand how some wants and necessities happened such as cars, phones, electricity, television, sports, the White House, etc. Understanding how current developments reflect on humanities is important because it generalizes dependent and independent variables people speculated as causes to his or his background. The cultural event experienced revolutionized the insight of past centuries. Humanities and cultural familiarities allow people to become in synch with today’s world of fast-paced assimilated awareness. 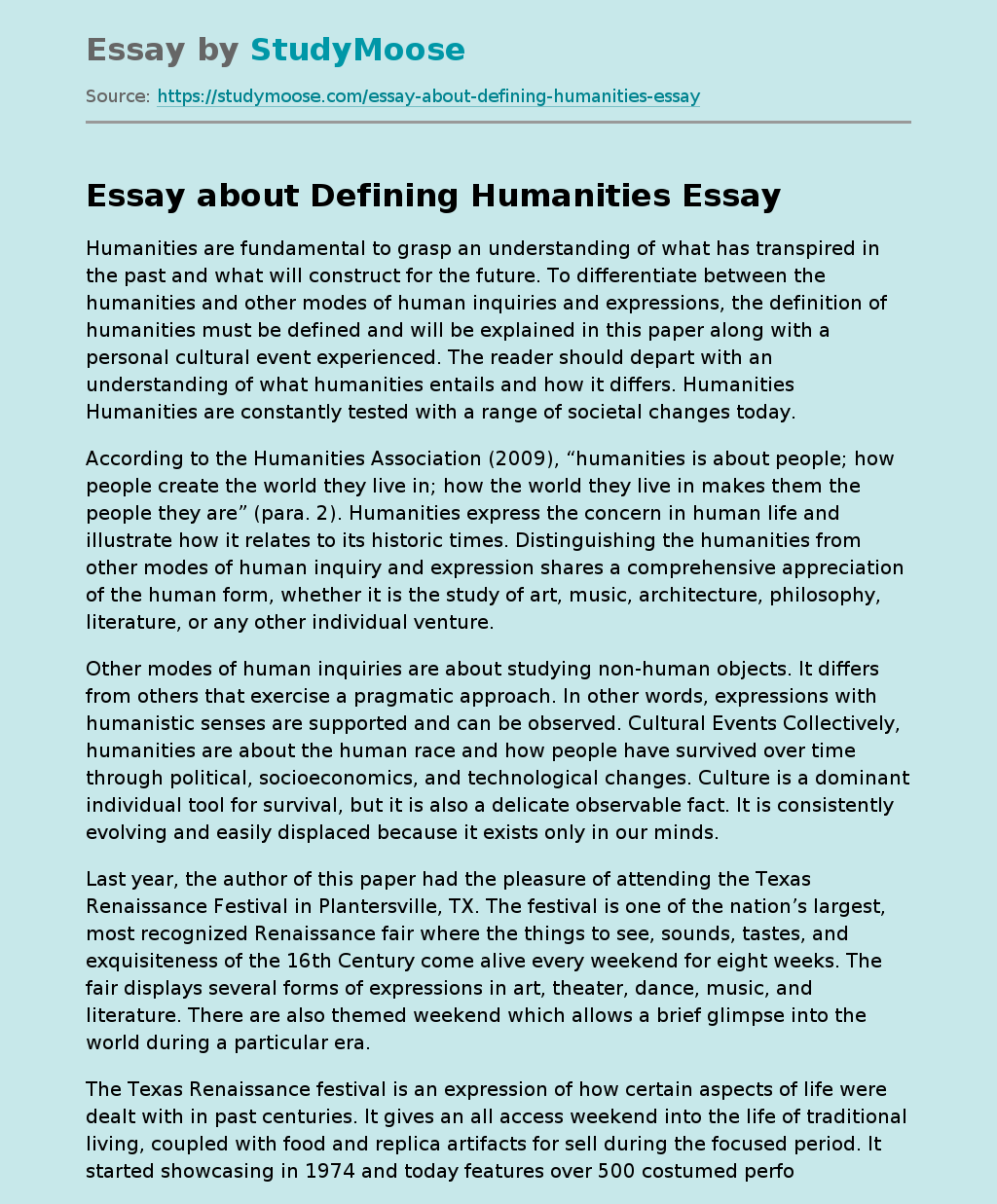