A three-time All-American halfback and 1961 Heisman Trophy winner, Ernie Davis would go on to win MVP title in both the Cotton Bowl and the Liberty Bowl, and was inducted into the College Football Hall Of Fame in 1979. He was the first African American man to win the Heisman Trophy, and to be picked 1st overall in the NFL draft. His career was cut short when he was diagnosed with cancer in 1962.

Don't use plagiarized sources. Get your custom essay on
“ A Famous Person Ernie Davis ”
Get custom paper
NEW! smart matching with writer

He is the first African American man to win the Heisman Trophy and the first black athlete to be chosen 1st overall in the NFL Draft.

A three-time All-American halfback and 1961 Heisman Trophy winner, Davis set yardage and scoring records at Syracuse University. He would go on to win MVP title in both the 1960 Cotton Bowl and the 1961 Liberty Bowl, and would be inducted into the College Football Hall Of Fame in 1979. His honors and accomplishments on the gridiron were matched only by his adversity off the field; As a black athlete playing many games in the south, he was the victim of racism on several occasions.

The most publicized incident occurred when he was selected as the Cotton Bowl MVP in 1960. Davis was told by organizers that he would be allowed to accept his award at the post game banquet, and would immediately have to leave the segregated facility. Ernie refused to receive the award, and his entire team agreed to boycott the banquet.

Although the details are somewhat disputed, Davis’ contract was considered to be the most lucrative ever offered to an NFL rookie. His teammates and supporters looked forward to seeing Ernie sharing the backfield with the great Jim Brown, breaking countless records and leading the Cleveland Browns to a decade of victorious seasons. Those seasons would never come, however, as Ernie was diagnosed with acute monocytic leukemia during preparations for the 1962 College All Star Game. Although treatment had begun immediately, the disease would prove incurable and Ernie died on May 18, 1963 – Having never played a professional football game.

Both the House and the Senate eulogized him, and his wake was in The Neighborhood House in Elmira, New York, where more than 10,000 mourners paid their respects.

His character and his athletic accomplishments caught the eye of John F. Kennedy, who had followed Ernie’s college career and made several attempts to meet the star. In 1963, when he heard Ernie would be honored by his high school with a school holiday, the president sent a telegram reading: “Seldom has an athlete been more deserving of such a tribute. Your high standards of performance on the field and off the field, reflect the finest qualities of competition, sportsmanship and citizenship. The nation has bestowed upon you its highest awards for your athletic achievements. It’s a privilege for me to address you tonight as an outstanding American, and as a worthy example of our youth. I salute you.”

Ernie Davis was the subject of the 2008 Universal Pictures film “The Express,” based on the non-fiction book Ernie Davis: The Elmira Express, by Robert C. Gallagher. 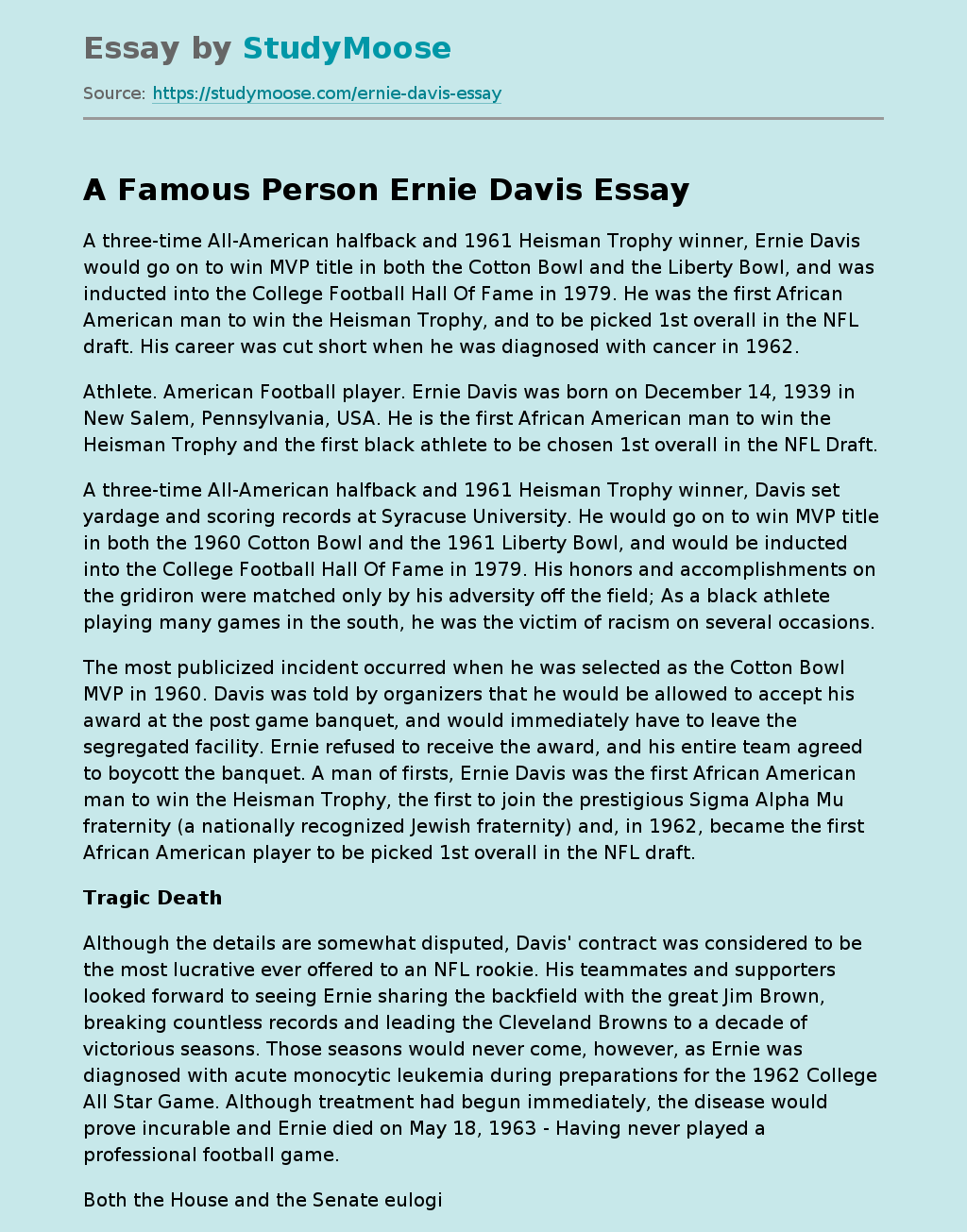