In the Modern Theories lecture, all three theorists: Freud, Vygotsky, and Piaget developed different views on social play. Erik Erikson’s play theory is similar to Vygotsky because Erikson viewed play as a necessary factor for social development. My extra credit paper is over the modern theorists. During the class lecture, I learned that Erik Erikson researched how the ego is the child’s personality and is responsible for a unified sense of self. Cognition and play was Piaget’s focus; Vygotsky researched a child’s ZPD development.

Don't use plagiarized sources. Get your custom essay on
“ Erikson on Play ”
Get custom paper
NEW! smart matching with writer

Bruner researched his idea on problem solving. However, play is more way of working out personality formation a way of understanding and interpreting what a child is feeling. All three theorists were social researchers. However, Erik Erikson was most noted for his work in refining and expanding Freud’s theory of stages. He found out that adults do not play because they have reached the superego stage. Anna Freud and Lili Peller were two researchers who found out that play is a way of working out traumas and it is a basis of play therapy.

Lili Peller researched how play is wish fulfillment; children have desires that they cannot fulfill, however, they play it out. Kids are working out their issues through toys. Play is a way of working out personality issues and understanding/interpreting how a child is feeling. Play is also a key feature of socialization. Corsaro developed the type of utterance reflects social status and creates social status. According to Gregory Bateson, the language of play is important; children give each other signals that play is going on.

Bateson found out that the real and the unreal was not the here-and-now and the not present. Bateson agreed with others about what is going on. Children also create a “frame” where play takes place; they step in and out of the frame using codes, signals and cues. Bateson also discovered that children also step in and out of the play frame using codes, signals and cues in “as if” activities. Millard Parten was the first lady to focus on how children progress in their social interactions in peers.

Mildred Parten, Ph. D. ocused on Sociology (1929); her research focused on how children progress in their social interactions with peers. I learned and remember from the lecture that according to Erikson, children are able to self heal when they play it out where adults talk it out. In auto cosmic play: play begins and centers on the child’s own body. The child’s play is the infantile form of the human ability to deal with experiences by creating model situations and to master reality by experiment and planning. Parten’s theory lead me to believe that the uninvolved stage was the first level of social play participation.

I enjoyed reading about Erikson’s timeline of Auto cosmic, microsphere and macro sphere was Erikson’s theory on how children develop in psychological stages. Auto cosmic play is playing with your own body verses in which infants play with their own bodies, and going on to a toy “microsphere (the kind of play that is done with small toys),” followed by the “macro sphere: the kind of play that is done between children” of play with other children. ” Autocosmic Microsphere Macrosphere play with body play with toys play with other children The diagram above is what I learned from the presentation.

Corsaro researched how children communicate with each other and “Language Serves as a way to form social groups and a hierarchy during play” and talked about a type of utterance that reflects social status and creates social status during play called Social Play Talk I questioned how play is a way of working out a person’s ideas on forming their own personality. Social play meant to me that it was one of the forms of a theorist’s ideas. Freud, Erikson, and Peller all influenced play therapy. I had a question about why Erikson found out that children had a trust vs mistrust stage when there was already an autonomy vs doubt stage.

My understanding of theory changed because I became more aware of what children do in a social play setting. Cat Garvey’s theories fit into what I observed in child’s play because Garvey’s preparatory talk fits into Explicit Directions for pretend play. I understood that children need directions to do a task (word puzzle). Signals also factored into how children decide to play. I found that signals can be very helpful in understanding children’s play. My favorite play talk lead me to believe Garvey was identifying the way children can transform the environment (playhouse into kitchen) and nything they can enact on. The different ways that kids are using language to create the scenario. Boys do not really use prep talk; girls are more likely to use prep talk “let’s play house”. I did not see any theory that was not play related, however, Garvey’s play theory was NOT helpful in explaining other types of nonverbal play and games. Each theorist’s ideas were based off of their own philosophy and beliefs that play were relevant to children’s purpose and context in social development. I was impressed that the modern theorists had some idea to describe and understand children’s social experiences. 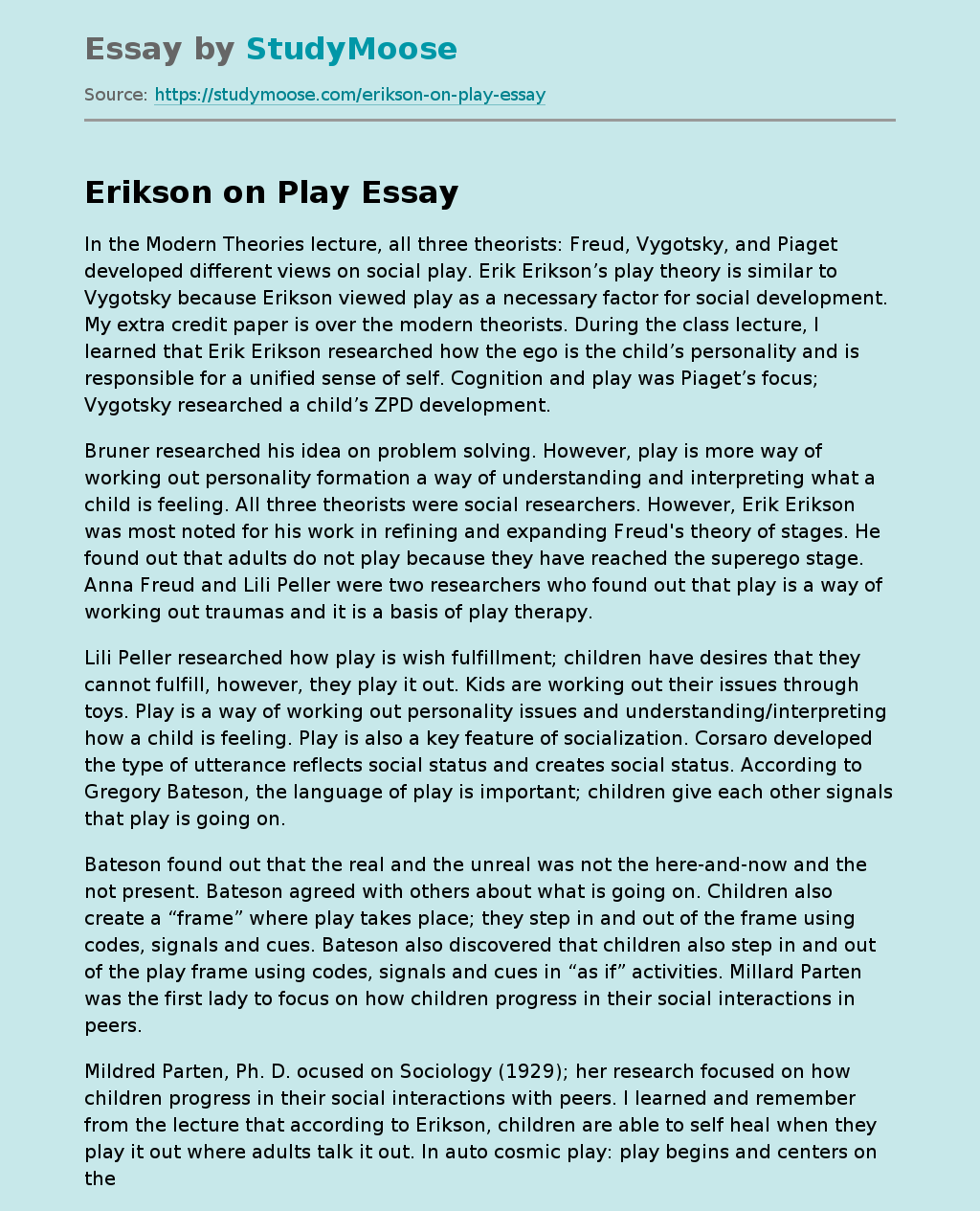