Often, heroic characters have to make tough choices in life; occasionally, the result of said choices is not to the individual’s benefit, but the outcome may bring joy to other people’s lives. In Christopher Paolini’s Eragon, coincidences, decisions, and desires combine to change Eragon’s life forever. Eragon is a hard working farm boy who shows a great deal of patience, honesty, and curiosity. He showcases these skills when hunting for food, and by coincidence he discovers a mysterious blue stone which he decides, out of curiosity, to take home with him.

Don't use plagiarized sources. Get your custom essay on
“ Eragon Book Analysis ”
Get custom paper
NEW! smart matching with writer

This “egg”, which happens to hatch into a dragon; this discovery becomes a turning point in Eragon’s life and he knows it could enable his way out of a long and tedious life. In fact, Eragon’s decision to keep and ultimately raise the dragon triggers his transformation from a boy to a dragon rider; forever altering his destiny, he will have to travel and meet new people.

He will have to make sacrifices and must accept the consequences to bring peace to Alagaesia; and he will make the inevitable choice of raising this dragon (Saphira) and training himself and his dragon to kill the Ra’zac and overthrow the Empire.

In this commitment, Eragon shows that a point in a person’s life where an event dramatically changes who or what he/she will become. Eragon’s decisions bring consequences and responsibilities’ compel him to fight for something in life and stand up for what one believes in.

People can lead their lives one way and know what their destiny might be, only to have coincidences alter their lives for the better, or the worst. As Eragon’s quest begins he shows how any person with desire, passion, and hard work can prove himself to be a man of honour, and bravery.

Coincidences can lead someone to meet different people, and see new places. A person’s life can ultimately be altered because of one coincidence and can change the course of his/her life in a good or bad way. Eragon’s life takes a dramatic turn after coincidently finding the egg while hunting for food, for his family. After finding the egg and realizing it is a dragon Eragon knows he has to do what he was destined to do: train Saphira and overthrow the Empire. “He raced home, trying to escape the dragon… my dragon” (pg. 6)

This mindset of Eragon shows that as much as he wants to escape the dragon, he can’t because he has made a special bond with the dragon and will inevitably raise her as his own, and because Eragon’s eye that catches the stone in the forest leads him to become the next dragon rider and to overthrow the evil reign of King Galbatorix. Also by coincidence, there is a story teller (Brom) who lives in Eragon’s village who has a great deal of knowledge about dragons and magic, and decides to aid Eragon in his journey.

After Eragon is aware that Brom is willing to help him, this pushes Eragon to make the decision and to take the responsibility as the next dragon rider. Eragon learns a great deal from Brom, who becomes one of his closest friends who also ends up being a dragon rider many years ago. Being the good friends they become Brom aids him and Eragon has the knowledge and strength to defeat Durza (Galbatorix’s Shade). When captured by the Ra’zac and almost being killed, another coincidence occurs when a mysterious figure scares away the Ra’zac saving Eragon’s, Brom’s and Saphira’s lives.

This mysterious person, whose name is Murtagh, also joins Eragon in his journey and assists him in killing the Ra’zac. This coincidence results in Murtagh saving Eragon’s life and continuing their journey, as well finding a helper in Murtagh to support him in his journey. ”Who are you? ” “Murtagh” (pg. 268) Not only does Murtagh save their lives but he plays a big role in helping Eragon, but shows how without Murtagh he would not make it as far as he did. Knowing Brom dies shortly after) Making a decision can alter someone’s life forever, and there is no going back especially when the decisions affects other people’s lives as well, making the decisions irreversible.

Eragon makes the decision to keep the egg and when it hatches and to raise Saphira as his own, this leads to the Ra’zac coming to his doorstep and killing his uncle. This is a significant event because Eragon’s uncle was practically his father and making the decision to keep the egg results in his uncle’s death, and without him he feels lost; however, the bond he creates with Saphira is so immense, that only death can break it.

The Empire is alerted that Eragon has the egg, and the send the Ra’zac to retrieve the egg back for the King. Making the decision to keep the egg is what instigates his entire journey and creates that special bond with his dragon. Eragon makes the decision to pursue the killers to avenge his uncle’s death and to bring peace to Alagaesia. He changes his life by pursuing the Ra’zac wanting the satisfaction of doing to the Ra’zac what they did to his uncle and feeling obligated to his uncle for all that he has done in his life to apprehend the murderers “What do you want me to do… ursue the strangers? ” (pg. 92)

He asks this of Saphira, who agrees with Eragon to pursue the strangers. With this one decision of following the killers, he changes his life dramatically and if he succeeds, he can change everybody’s life for the better. Eragon decides that he cannot continue his journey without more help, so he travels to the Beor Mountains to seek help from the Varden, a rebellious group also against the Empire. After Brom dies, Murtagh helps him; however, this is not enough after he knows he has too many enemies: Urgals, the Ra’zac and Durza the shade. It is a desperate path to take… We are desperate” (pg. 320).

This decision is a great benefit to Eragon because he gets all the help he needs, meets the person who has been in his dreams in Arya (an elf from the Varden who is trapped) and eventually kills Durza. When a person desires something in life, he/she will do whatever it takes to achieve it, sometimes the desire is so strong that is can change someone’s life. Eragon has a desire to avenge his Uncle Garrow’s death after the Ra’zac brutally murders him. This eventually changes his life, because of chasing the killers. And what would give him more satisfaction than hunting down the strangers? ”(pg. 93) He asks Saphira how he can satisfy himself, then realizes hunting them down and killing them would be the only way to achieve total satisfaction for his burning desire to avenge his uncle as well as finally feeling the sense of accomplishment of the commitment he made.

Eragon has a desire to become the very best he can at magic, and swordsmanship, this pushes him to become the best so he can fend off for himself and not rely on others to help him. It is time for you to use the blade… We’ll cut each other to ribbons… Not so. Again you forget magic” (pg. 159) This is when Eragon and Brom have their daily sparring, where Brom teaches Eragon how to fight with a sword and magic, his desire to become the best shows when he wants to learn something new every time they spar. After seeing Arya imprisoned in his dreams, he is determined and has a desire to rescue her. Arya, who ends up being the elf that sent the egg to Eragon in the first place. “I expect the queen’s hostility will abate.

The fact you rescued Arya will greatly help our case with her” (pg. 410) The queen is somewhat against having a dragon rider joining the Varden, but because he had a desire to rescue her and risked his life saving Arya, the queen allows Eragon to join. Sometimes in life people have to make tough choices that will positively or negatively affect others around them. The choices we make can change our and other people’s lives forever, there are many things that may change how our life is played out, coincidences, decisions, and desires just being a few. 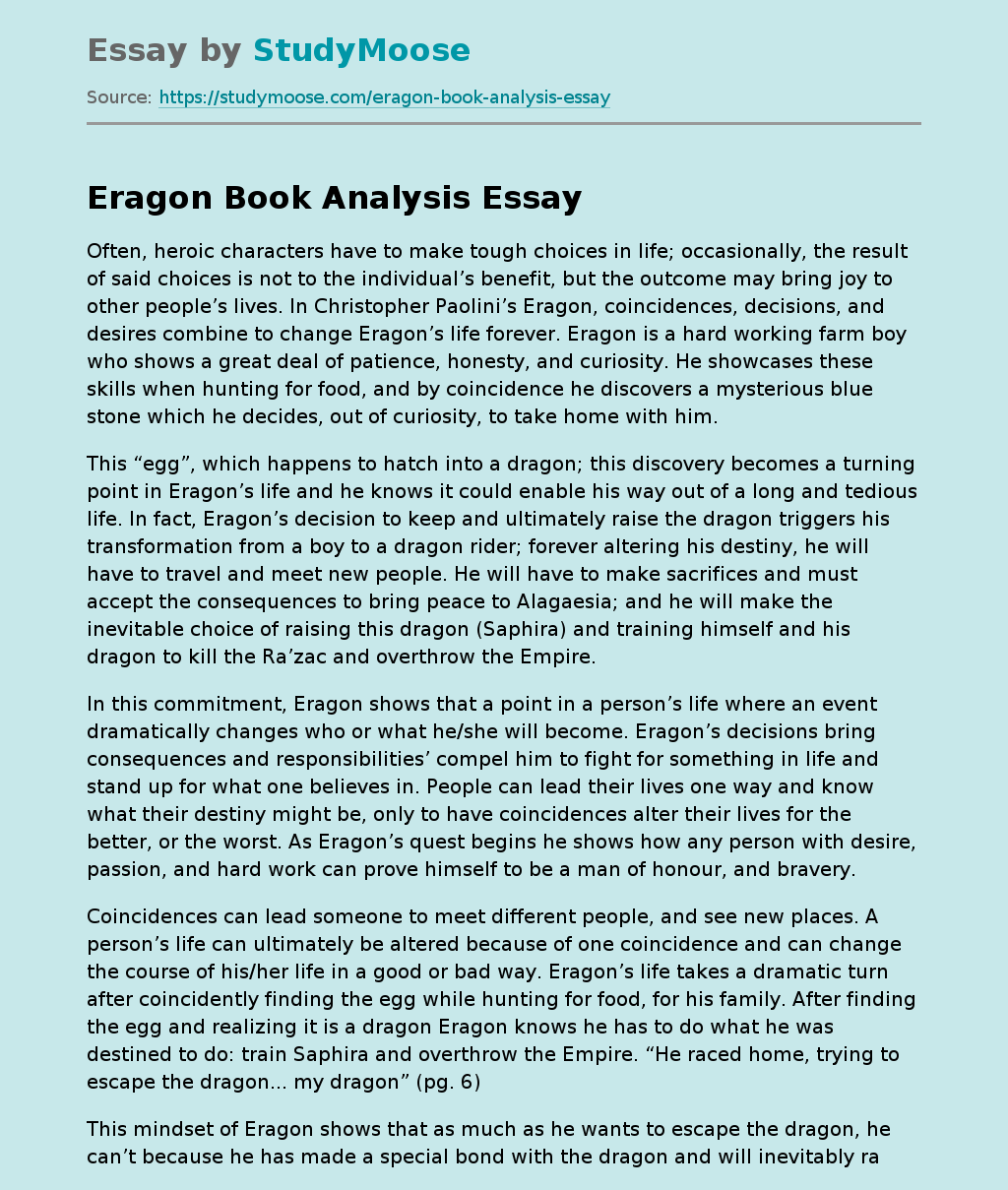