EEOC stands for the U.S Equal Employment Opportunity Commission. EEOC’s job is to enforce the laws against discrimination in the workplace. The discrimination can refer to an employee’s race, color, religion, sex, pregnancy, national origin, age, disability, or genetic information. They also protect employees for complaining about discrimination, filing discrimination charges, or being part of an employment discrimination investigation or lawsuit (EEOC, 2014). EEOC first investigates alleged charges in a fair and accurate manner. Based on their findings determines whether or not discrimination has occurred, and if a lawsuit is in order or not.

EEOC also provides programs to prevent discrimination in the workplace before it happens. They provide outreach, education, and technical assistance programs. For example, one particular article released from EEOC deals with pregnancy discrimination (EEOC, 2014). This presentation will take a deeper look into the article and how EEOC tries to change discrimination within the workplace. The Issue that Led to the Lawsuit

in Indianapolis. This business provides machines, supplies, and services to people in northern Indiana and northwestern Ohio (EEOC, 2014). In April of 2012, Lynsey informed her bosses that she was pregnant. The company responded by hiring a new employee that Lynsey would train. The reason for this was to replace Lynsey when the time came for her to take leave to have the baby. Soon after this Lynsey was fired and the company hired yet another new employee. Both new employees where not pregnant (Green, 2014). This lead to Lynsey Burd to contact EEOC who filed the lawsuit on September 23, 2014 (EEOC, 2014).

The lawsuit is still in affect and the Office Concept Inc. is not commenting on the lawsuit at this time (Green, 2014).

The ramifications of this lawsuit can swing either way. Lynsey may lose her lawsuit, and join many women who have tried and failed to prove pregnancy discriminations in court. Business can say it had nothing to do with the pregnancy but more to do with the woman’s inability to do certain tasks the job requires. Judges tend to favor this logic and women tend to lose their lawsuits (Gordon, 2012). The other side to this is the business loses and pays out to Lynsey. This can bring to light to customers or potential employees on the injustice the business causes its employees. The business may experience the loss of customers and have trouble hiring. EEOC’s Role in the Lawsuit

EEOC first investigated Lynsey Burd claim against Office Concepts Inc. They found that Lynsey had a case against the organization through the Pregnancy Discrimination Act. Second, EEOC try to reach a settlement with the company through its conciliation process (EEOC, 2014). Third, the settlement failed to work forcing the EEOC to file a suit in the District Court for Northern District of Indiana. EEOC regional attorney Laurie Young has the case and represents Lynsey Burd. Young believes women who are fired because of pregnancy puts their families in harm’s way. She also believes women should not have to worry about becoming pregnant or deal with bias and adverse actions because of a pregnancy at any job. This lawsuit is still on going and EEOC will continue defending Lynsey Burd to seek enforcement of the laws that protect woman from this kind of discrimination (EEOC, 2014). Does EEOC Promote Social Change?

EEOC does try to promote social change against discrimination of any kind in the workplace. This article of the lady fighting for her rights shows the level of commitment EEOC has in enforcing the laws that protects people in the work place. This is not the first lawsuit EEOC has been involved in when it comes to pregnancy discrimination. Even though many of these cases are lost EEOC continues to support, help, and fight for pregnancy rights in the workplace. EEOC has received so many pregnancy discrimination complaints that they have been holding hearings on the subject (Gordon, 2012). The common problem with pregnancy discrimination is companies claiming pregnancy blindness and courts agreeing which dismisses the cases against them. Examples of this are, a lady being fired because of repeated tardiness due to morning sickness, a lady got fired during maternity leave because she wasn’t working instead getting treated for postpartum depression, and a lady who works as a lab technician got unpaid leave after becoming pregnant because she is exposed to toxic chemicals (Gordon, 2012). In each case the courts favored the company involved. Despite the fails EEOC continues to fight for women’s right when it comes to pregnancy discrimination. There is also legislation drafts being made to address this problem (Gordon, 2012). EEOC Press Release versus the News Article

EEOC takes its role in defending the laws against discrimination in the workplace seriously. Their goal is to change and stop discrimination from happening to people. To be able to change social perception people need to be educated and shown the injustice that hurt others and their families. EEOC does not just enforce the laws, but defends the people who have been discriminated against. Even though many of these cases are lost EEOC continues to support, help, and fight for rights in the workplace.

If I was a senior manager of this company to avoid this issue in the future I personally would not discriminate against pregnant women. If a woman becomes pregnant they would have to train a temporary replacement. She would be given a certain amount of maternity leave based on doctor’s orders. If the maternity leave needs to be extended it can be with a doctor’s note explaining why. Once maternity leave is up she would have a job to come back too. During her pregnancy she would receive certain relax in policy. For example, if sever morning sickness coming in to work late will be over looked, early leave time to make doctor appointments, and reduced work load so as to not put the pregnancy in danger. 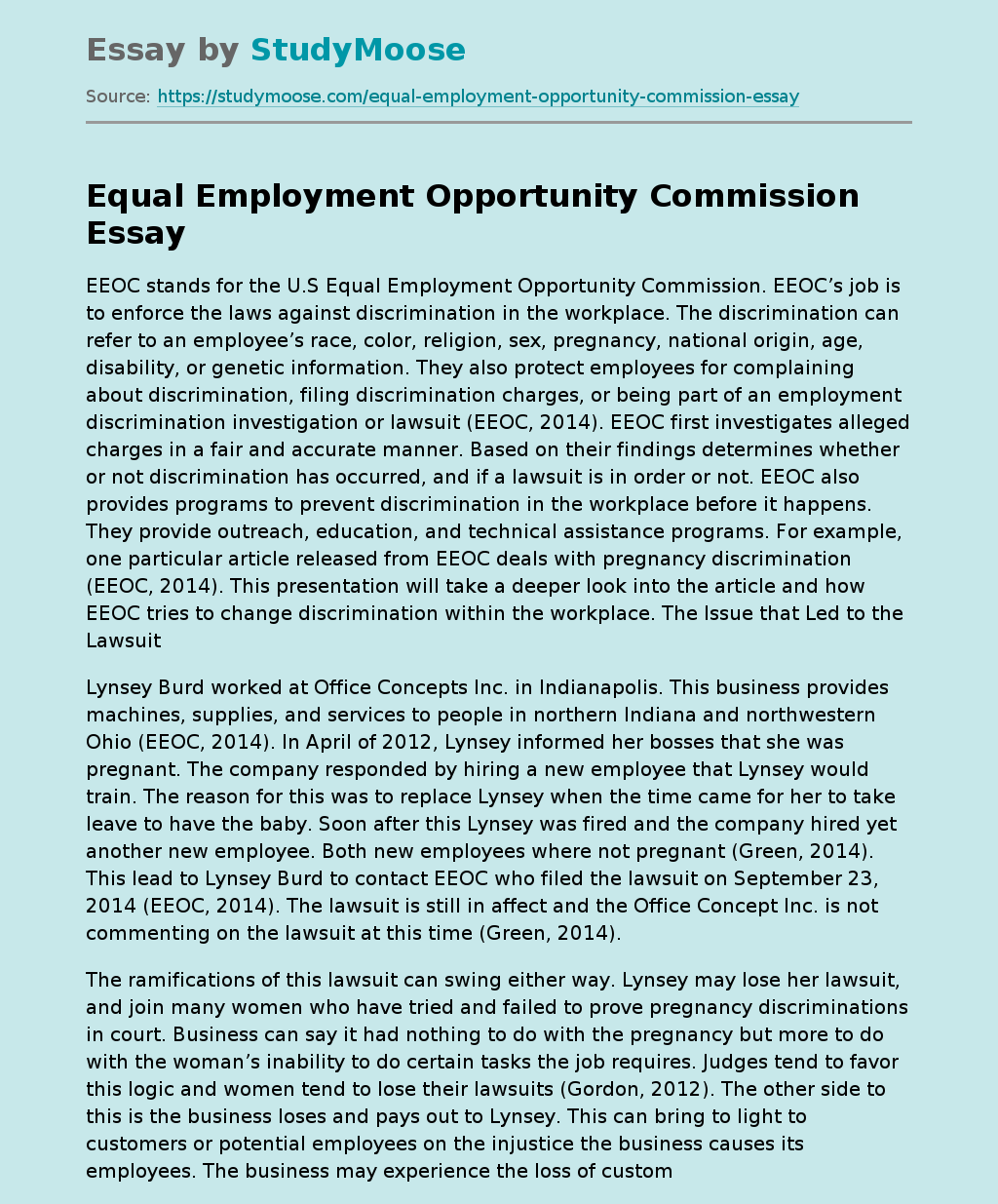