James Joyce’s “Araby” and Katherine Mansfield’s “The Garden Party,” both revolve around a character that goes through a dramatic change due to a significant event, which shapes their outlook on life.“Araby” is a story about the failed romantic endeavors of the narrator and the death of his imagination as he discovers the extent to which it can blur reality; thus, being left with the crushing truth of reality. “The Garden Party” is about a classy young girl, Laura, who realizes that although life is enigmatic, all people share a common experience which they are bound by, such as death.

Don't use plagiarized sources. Get your custom essay on
“ Epiphany in James Joyce’s “Araby” and Katherine Mansfield’s “The Garden Party” ”
Get custom paper
NEW! smart matching with writer

Whereas the narrator in “Araby” has an epiphany that he must accept reality for what it is, Laura in “The Garden Party” has a self-realization that nothing consists of artificial delight and she must face the harsh truth that reality is not always as it seems.

In “Araby” and “The Garden Party,” both characters, the young boy and Laura, are dramatically similar in nature to show how they’ve matured and the impact its made on their lives.

Both characters are akin because they are young and naive. They know little about the world and live in their imagination, a safe place where they are protected from the world. In “Araby” however, the author makes the narrator appear naive and ignorant to show his period of transition from an innocent boy to a matured man. The narrator is on a “quest” to escape his humdrum, shabby existence. The bazaar, with its exotic-sounding name and the promise of wonderful gifts, provide an escape for him.

The narrator’s crush on Mangan’s sister is also apart of this fantasy world he has built for himself. The bazaar and the girl come together in his fantasy, holding out hope for a life devoid of dullness. By heading to the bazaar, he wishes to make his dreams come true. However, his dreams are shattered as he arrives because he discovers that the bazaar is empty and is nothing like he expected it to be. The narrator even states, “remembering with difficulty why I had come” (Joyce); he feels foolish to have thought that his dreams would come true. His fantasy world was just that–a fantasy. This realization is a source of disillusionment that makes his eyes burn with “anguish and anger” (Joyce). This ends up affecting the narrator in a significant way because he becomes aware of his ignorance and how he let his naivety get the best of him. This realization shows how he transforms from an innocent boy into a mature man who has experienced the harsh truths of reality. The author in “The Garden Party” makes the main character similar to that of “Araby,” but for a different purpose. The author makes Laura appear childlike to show how her experiences helped shape her worldview. The world Laura lives in represents the rearranging of reality for comfort. As she is exposed to death and darkness her comfort is disturbed, which causes her to have an epiphany. She starts realizing that life has more layers to it, and reality is not as simple as the thought. For instance, when she finds out about the man’s death, she starts to worry about her appearance, rather than sympathy for the man. She is intrigued by her looks as she says, “…the first thing she saw was the charming girl” (Mansfield) and soon dismisses the man’s death. She becomes aware that she was naive to think that the world was simple and consisted only of pleasantness but, “…what life was she couldn’t explain” (Mansfield). This leaves a great impact on her view of the world because she realizes that reality is not always as it seems and that tragedy is intertwined with life.

The setting in both stories contribute to their moment of growth by showing how their environment affects their overall view on life. For instance, in “Araby,” the setting is described as being “blind” which, can be directly linked to how unaware he is of the world. “North Richmond Street, being blind, was a quiet street…” (Joyce). This metaphoric reading enables one to see the literal meaning behind the street’s blindness and how his child-like view on the world is prevents him from seeing reality; thus, limiting him to a narrow world-view. The dreary descriptions throughout the story is personified and enhances the narrator’s feelings. The darkness emphasizes how trivial he feels having let a false vision dominate his life. He realizes that he must give up on his hopes and dreams to confront the truth of his existence. The imagery foreshadows that his epiphany will be one that is dreadful, shaping his view on the world to be one that is cold and grating. Although, the author in “The Garden Party” and “Araby” use setting similarly to get their points across, the author in “The Garden Party” describes the setting as “ideal” to show how Laura is sheltered. For instance, the author states that, “They could not have had a more perfect day for a garden-party if they had ordered it” (Mansfield) and uses certain diction to present this ideal world. Her view is shielded because of how she is only exposed to her part of the world. She does not know anything else apart from the joy she experiences when she throws her garden parties. The authors contrast of the neighbouring houses to Laura’s estate shows how the upper-class people and lower-class people lead different lives. The lower class people are pointed out as another “black stain,” (Mansfield) destroying Laura’s view because she is able to experience the difference herself. Due to this experience, she perceives the world differently, she realizes that despite her life being filled with artificial delight and joy, everybody is connected through a common experience, death.

The symbols that are present in both stories and are used in similar effect to show how the young boy and Laura have grown into a different person–seeing the world in a different manner. In “Araby,” the bazaar is a place that represents his desire to escape from the dullness of his tedious life. “I heard a voice call from from end of the gallery that the light was out. The upper part of the hall was now completely dark” (Joyce). He realizes however, that the bazaar is simply only a commercialized place to buy things, driving off all his hopes to change his life for the better. He sees himself as, “a creature driven and derided by vanity” (Joyce) and through this, he reaches an epiphany; that being that desires and hopes will only lead to bitterness in the end. In “The Garden Party,” Mansfield incorporates the use of symbols to show that when given an opportunity to return to her comfortable lifestyle, she rejects her privileges and aligns herself outside her family. The hat is a symbol that represents her wealth to people who will never experience it. When visiting the Scott’s house she is ashamed of her hat and says,”Forgive my hat…” (Mansfield), the hat is a clear distraction from her moral intuitions, leading her back to to frivolous and selfish concerns. The symbolism of the hat leads Laura to her epiphany because of how it provides Laura with the vision to see beyond her world, realizing that there is more to life than her extravagant garden parties, death is apart of the world no matter of social class, and affects all. 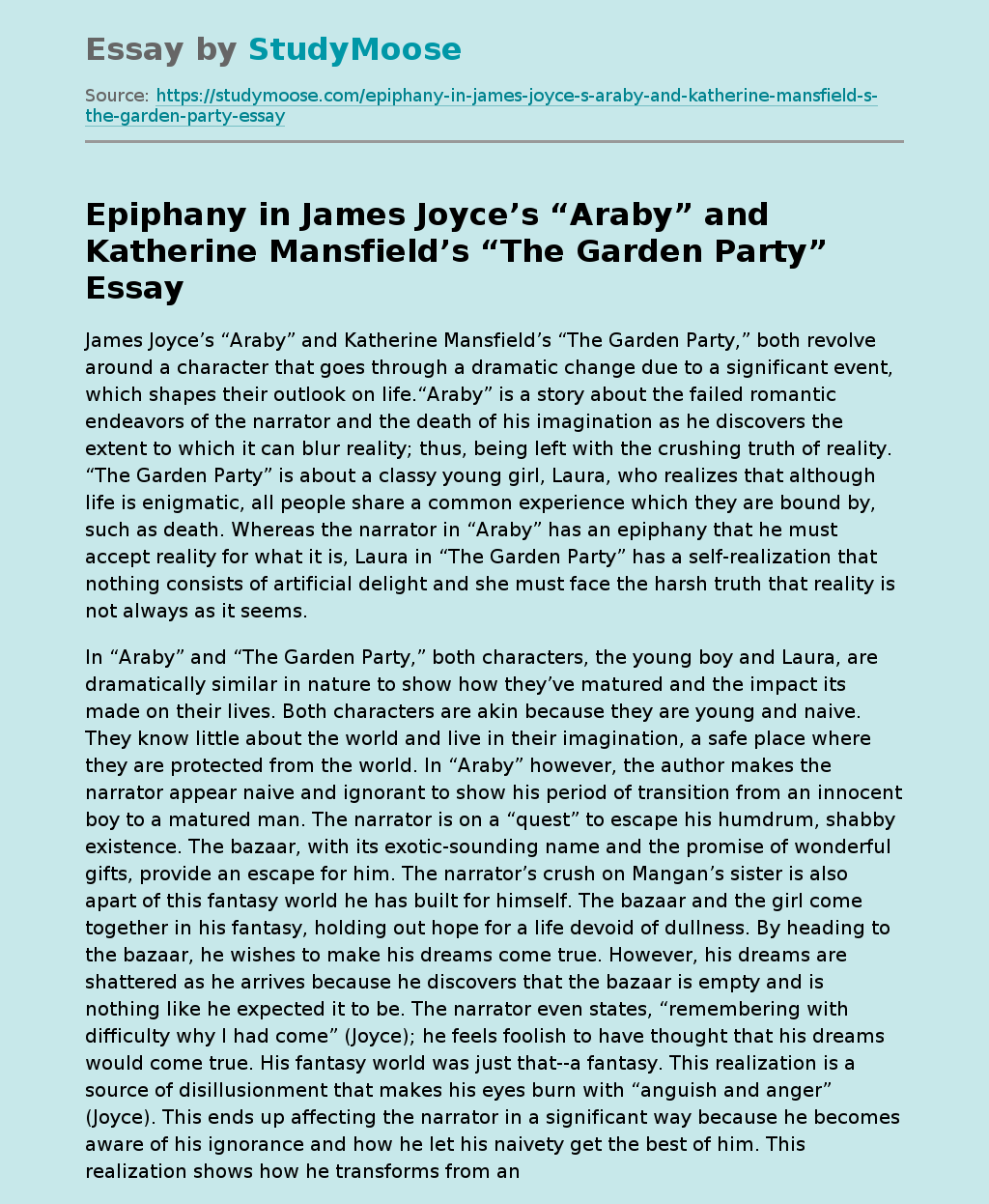