The story beings in medias res. In Medias Res is Latin for “it begins in the middle of things” and then has flashbacks to explain action leading up to that point. In Paradise Lost, for example, the story begins after Satan and his fellow rebellious angels have been cast from heaven, by God, into Hell. The war in heaven has taken place and Satan is making plans for the ruination of the coming realm of men, Earth, particularly Eden and God’s new creatures, Adam and Eve.

Don't use plagiarized sources. Get your custom essay on
“ Epic Conventions ”
Get custom paper
NEW! smart matching with writer

The story begins with an invocation (prayer) to a god or gods. The poet, Milton, attempts to recapture the Homeric tradition of reciting an epic poem to an audience, say at a feast. To that end he begins by calling for a blessing – for the Christian god whom he refers to in pagan terms as the “Heav’nly Muse,” Milton invokes the pagan ideology that the called upon god or muse came into the man therefore it was not the poet who recited, but the god in the poet’s body.

Poet’s, then, were considered very sacred, for they could call down a god and have the god in them, at least temporarily. We continue to have the remnants of this belief, of course.

We often think of poets or of any true artist as being different or touched by a special hand. In the case of the beginning of Paradise Lost, the poet says something like “Sing Heav’nly Muse… say first what cause moved our grand parents in that happy state … to fall off from their creator”

The story begins with a statement of theme.

Always, because these poems are so long and so complex, although the basic stories would have been familiar to the audiences, the poet would begin with announcing what the recitation was to be about.

That way, everyone could focus on and appreciate, not so much WHAT was being said, but the WAY THAT IT WAS PRESENTED. In essence, Milton’s Paradise Lost retells the story of Genesis but presents it as an epic poem. We are no stranger to that concept; we go to concerts where we may already know all of the song. So, we go to hear the presentation of the songs, which add to our concepts of the meaning and significance of those songs.

The story has many epithets. These epithets are re-naming of the characters, gods, or things by stock phrases. An example is the renaming of Satan as “th’ Arch-Enemy”, “th’ apostate angel”, “O Prince” or “O Chief of many throned Powers” and even “fall’n Cherub. ” It is important for us to notice these epithets, first, because they add description, and second, because we get confused about who is doing what if we do not recognize the epithets as well as the names.

The story uses catalogues of things and characters; there are many lists, both long and short. Just as the Old Testament has catalogues of genealogies – you remember all those begets – just so do ancient epics keep track of the lists of history.

In both Book One and Book Two of Paradise Lost, for example, there is a list of the principal angels who fell from grace as Satan’s compatriots. Also listed are their various names and places where they will be worshipped as gods of pagan faiths.

There are long formal speeches by many characters. You will not have any trouble spotting these. Sometimes they happen in the heat of battle and other seemingly inappropriate times, but more often they occur at various kinds of meetings, as in an assembly of chieftains.

Book One of Paradise Lost is filled with such formal speeches, key among them Satan’s with his famous line “better to reign in Hell, than serve in Heav’n. “

Gods intervene in the affairs of human beings in these stories. For example, in Book Seven of Paradise Lost, Cherubim, Ithuriel and Zephon, sent by God to Eden, find Satan, “squat like a toad, close at the ear of Eve. ” They confront him before more damage is done in terms of corrupting Eve.

Epics frequently have epic digressions. These are passages that do not further the action of the story because they are asides or because they are repetitions. Remember that these recitations did not have TV replay shots. The audience had to remember a vast amount of material, so redundancy or reminding them of background material would have been helpful to them. For example, In Book Seven of paradise Lost, Adam’s conversation with the angel Raphael becomes, in some instances, a recounting of Genesis and even digresses into the topic of angel’s mating habits.

Yet another use for the digression is to provide a prologue of sorts, as an introduction seems overlooked due to the epic convention of beginning the poem in medias res. Also this aside more firmly orients the poem’s audience, given its vast setting, the cosmos.

The settings of these stories are vast. Paradise Lost is concerned with the mortal geocentric universe, from Hell to Chaos to the Earthly and Heavenly planes. The stories use the epic simile. An epic simile is a long comparison of two things that are in different classes. They make vivid an image and describes or clarifies.

An example can be found in the extensive comparison of Satan, a fallen angel formerly the epitome of celestial light and beauty, to one of the Titans Briareos, whom led the revolt of the Titans against Zeus. Like Briareos, Satan is a vast creature covered in darkness. He is likened to Leviathan, a sea-beast, concealed in the ocean’s dark depths, or an illusory island hidden in the dark. But the great Leviathan, possibly the whale in Jonah’s unfortunate encounter, can rise from the imprisoning dark or return to it after becoming beached upon shore. Satan rose from the depths of Hell to enter Eden, though he could not of course remain.

The heroes embody the values of their civilization. In Milton’s time the medieval practice of physiognomy was still much employed. After Chaucer’s example in the Canterbury Tales, physical facade’s, particularly the face, are believed expressions of a person’s internal moral state. For example, much is made of Satan’s former beauty, an expression of the former purity of his ethical and moral internal being.

His former beauty and grace, expressed in terms of light and luster become dim in his confrontation with Ithuriel and Zephon, Cherubim, formerly of a lesser angelic order than Satan, who still in the service of God retain that luminosity of his grace. Paradoxically, the description of Satan as a monstrous, leviathan-like figure is juxtaposed in the poem with his nearly angelic appearance. Fittingly, since Milton’s time, physiognomy has fallen out of usage, as many accept evil and malicious intent often has a comely facade. 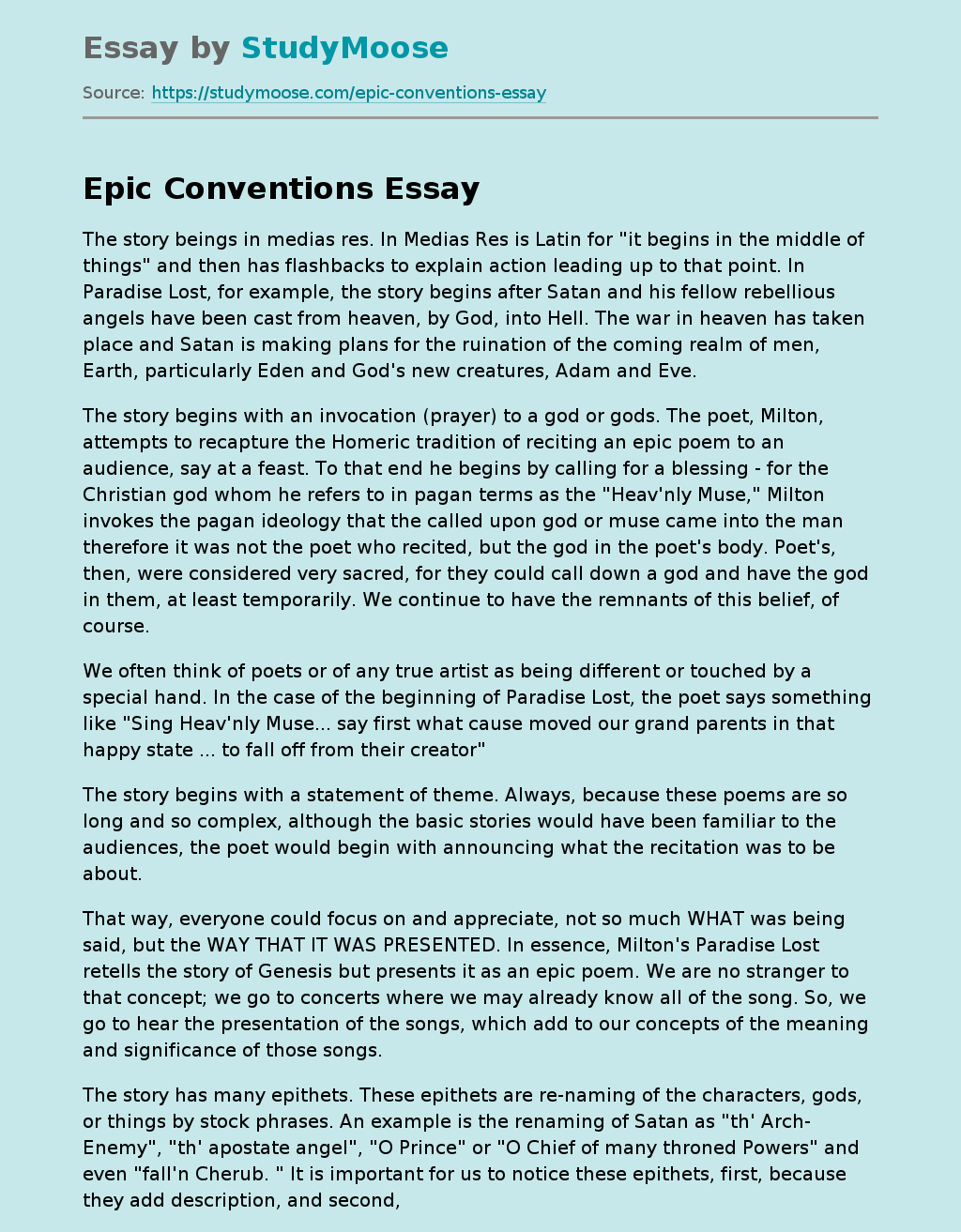