Environmental pollution: its effects on life and its remedies

The term pollution refers to the act of contaminating ones environment by introducing certain hazardous contaminants that disturb the ecosystem and directly or indirectly affect the living organisms of that ecosystem. Pollution in general is the activity of disturbing the natural system and balance of an environment. The increase in the pollution over the years by man has caused severe damage to the earth’s ecosystem. It is responsible for global warming which is leading to the end if all the lives on earth.

Don't use plagiarized sources. Get your custom essay on
“ Environmental pollution: its effects on life and its remedies ”
Get custom paper
NEW! smart matching with writer

Over the years there is an extreme increase in the rate of human diseases, and death rate of various animals and plants on earth, and that is all because of the pollution caused by man himself. AIR POLLUTION:

According to the dictionary, air pollution is the contamination of air by smoke and harmful gases, mainly oxides of carbon, sulfur, and nitrogen. Some examples of air pollution include:
Exhaust fumes from vehicles
The burning of fossil fuels, such as coal, oil or gas
Harmful off-gasing from things such as paint, plastic production and so on Radiation spills or nuclear accidents
Air pollution is linked to asthma, allergies and other respiratory illnesses.

Proficient in: Human Life And Environment

You can more about how the environment affects human health here. LAND POLLUTION

Land pollution is the degradation of the Earth’s surface caused by a misuse of resources and improper disposal of waste. Some examples of land pollution include:
Litter found on the side of the road
Illegal dumping in natural habitats
Oil spills that happen inland
The use of pesticides and other farming chemicals
Damage and debris caused from unsustainable mining and logging practices Radiation spills or nuclear accidents
Land pollution is responsible for damage done to natural habitat of animals, deforestation and damage done to natural resources, and the general ugly-ing up of our communities.

Light pollution is the brightening of the night sky inhibiting the visibility of stars and planets by the use of improper lighting of communities. Some examples of what causes light pollution:
Street lamps that shine light in all directions, instead of with a hood to point light downward toward the street. Unnecessary lights, especially around the home
Light pollution uses more energy (by shining more light up instead of down), may affect human health and our sleep cycles and most importantly, corrupts our kids telescopes and their curiosity. Noise Pollution

Noise pollution is any loud sounds that are either harmful or annoying to humans and animals. Some examples of noise pollution:
Airplanes, helicopters and motor vehicles
Construction or demolition noise
Human activities such as sporting events or concerts
Noise pollution is disruptive to humans’ stress levels, may be harmful to unborn babies, and drives animals away, causing nervousness and decreasing their ability to hear prey or predators. Thermal Pollution

Thermal pollution is the increase of temperature caused by human activity. Warmer lake water from nearby manufacturing (using cool water to cool the plant and then pump it back into the lake) Included in thermal pollution should also be the increase in temperatures in areas with lots of concrete or vehicles, generally in cities These kinds of environmental pollution can cause aquatic life to suffer or die due to the increased temperature, can cause discomfort to communities dealing with higher temperatures and can even affect plant-life in and around the area. Visual Pollution

Visual pollution is what you would call anything unattractive or visualiing damaging to the nearby landscape. This tends to be a highly subjective topic, as we all find different things attractive and unattractive. Some examples of visual pollution:

Skyscrapers might block the view of a mountain
Graffiti or carving on trees, rocks or other natural landscapes Billboards, litter, abandoned homes and junkyards could also be considered among three kins of environmental pollution Mostly visual kinds of environmental pollution are annoying, although some may say they are also depressing (such as when they can’t see a view through a billboard). Water Pollution

Water pollution is the contamination of any body of water (lakes, groundwater, oceans, etc). Some examples of water pollution:
Raw sewage running into lake or streams
Industrial waste spills contaminating groundwater
Radiation spills or nuclear accidents
Illegal dumping of substances, or items in bodies of water
Biological contamination, such as bacteria growth
These kinds of environmental pollution are linked to health issues in humans, animals and plant-life. You can read more about how the environment is affecting our health here.

Environmental pollution: its effects on life and its remedies. (2016, Apr 20). Retrieved from https://studymoose.com/environmental-pollution-its-effects-on-life-and-its-remedies-essay 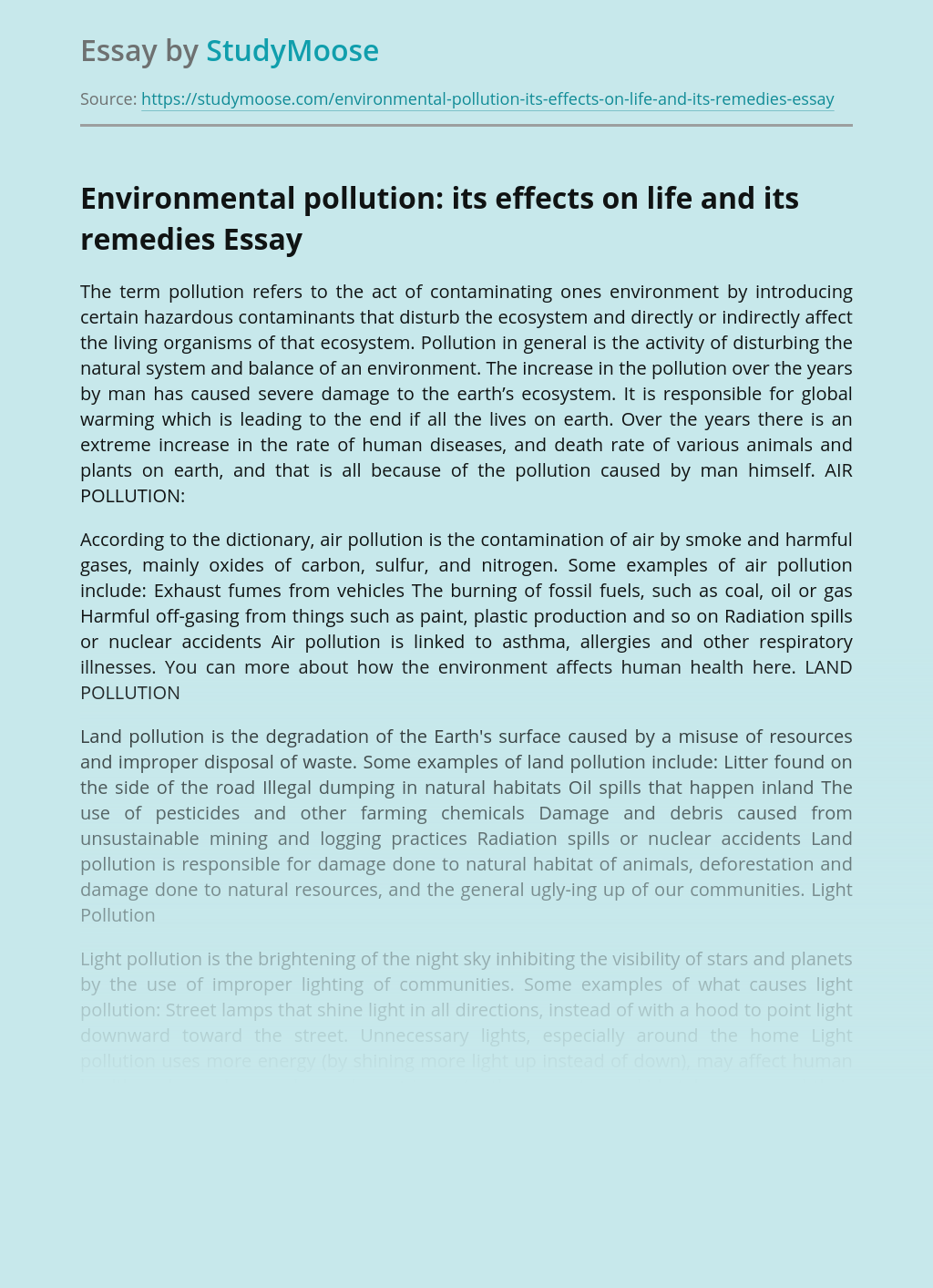