The film Wall-E is related to the science and description area because it talks about the environment and what can happen in the future. The film starts with a robot named Wall-E and he has been assigned to clean up Earth from all the waste that the humans have left behind. It shows him coming out of his house that is full of little different things that humans would think are trash but he does not know what they are and considers them treasures.

Don't use plagiarized sources.
Get Your Custom Essay on Environmental Message in Wall-E Just from $13,9/Page

As he is performing his duties he hears another ship land and drops off another robot named Eve. Eve’s mission is to find any living organism and bring it back to the main ship where all the humans are living so that they can determine if it is okay to return to Earth.

Wall-E is curious about Eve and would like to get better look at her and eventually he ends up falling in love with her.

When Eve and Wall-E go back to the planet with the humans, they find that they are fat, lazy and all wearing red because they are under the influence of technology and being told what is the new style and what they should be eating. When they go to the captain to show him the plant that they discovered the skipper who is also a robot tries to throw the plant away because he does not want the humans to return to Earth, he likes how he is in control of them and does not want that to change.

There are two global implications of this movie. The first one is an environmental message on what happens over time when we do not take care of our planet. It makes going green a natural part of everyday life and shows society that recycling and throwing away the trash is important. Recycling should be made aware to everyone so that they can see the problems that it can cause to society if not practiced at all. Recycling is also important because it helps people, saves energy, saves the Earth, and helps mitigate Global Warming, reduces Pollution and waste products in Landfills, and helps save money.

When it comes to what could happen if we do not educate society on taking responsibility for their waste and disposing it in the proper way this could happen to our planet. I know that after seeing what can happen I have taken recycling more seriously and I have also made sure to educate my family and friends because I want them to do their part on going green and taking responsibility for their waste. I know this huge change on getting everyone to go green will not happen overnight but if we all are more conscious about and do our parts then I am sure that one day we can make sure that it does not happen like in the movie.

The second global implication for this movie is concerning technology. In the movie humans are living in the future on a space ship because they cannot return to Earth for it is uninhabitable from all the waste. When we are introduced to the humans they are all wearing red clothes, are fat and lazy, and are all sitting on chairs either watching television or on telephone calls on tablets. That we are too dependent on routines and habits that make us distracted and not able to make our own decisions. When Wall-E ends up accidently bumping into one of the ladies she realizes that her clothes have changed color and that she finally opens her eyes and sees everything from a new perspective and realizes that she does not have to be dependent on technology.

I realized that from watching this movie there are times that we do depend on technology a lot. We all have cell phones, computers, game consoles, and televisions, just to name a few. I learned that we do listen to what advertisements tell us are the greatest new items to have and most of us go out and buy them right away. It shows that if we do not take time to just stop and remember the days before technology came along this could happen to all of us.

I like how at the end of the movie it showed robots and humans working together to clean up the Earth. It also showed the humans communicating with one another in person and not hiding behind a technological device. I think that in today’s society we need more one on one communication that is in person because now it is all behind technology and it takes away from the personal aspect. It shows that we can control how much consumerism and advertisements we want to give into. I think this movie is a great way to adults and humans the importance of properly disposing their waste so that this never happens and also to be conscious of how much technology they are using. 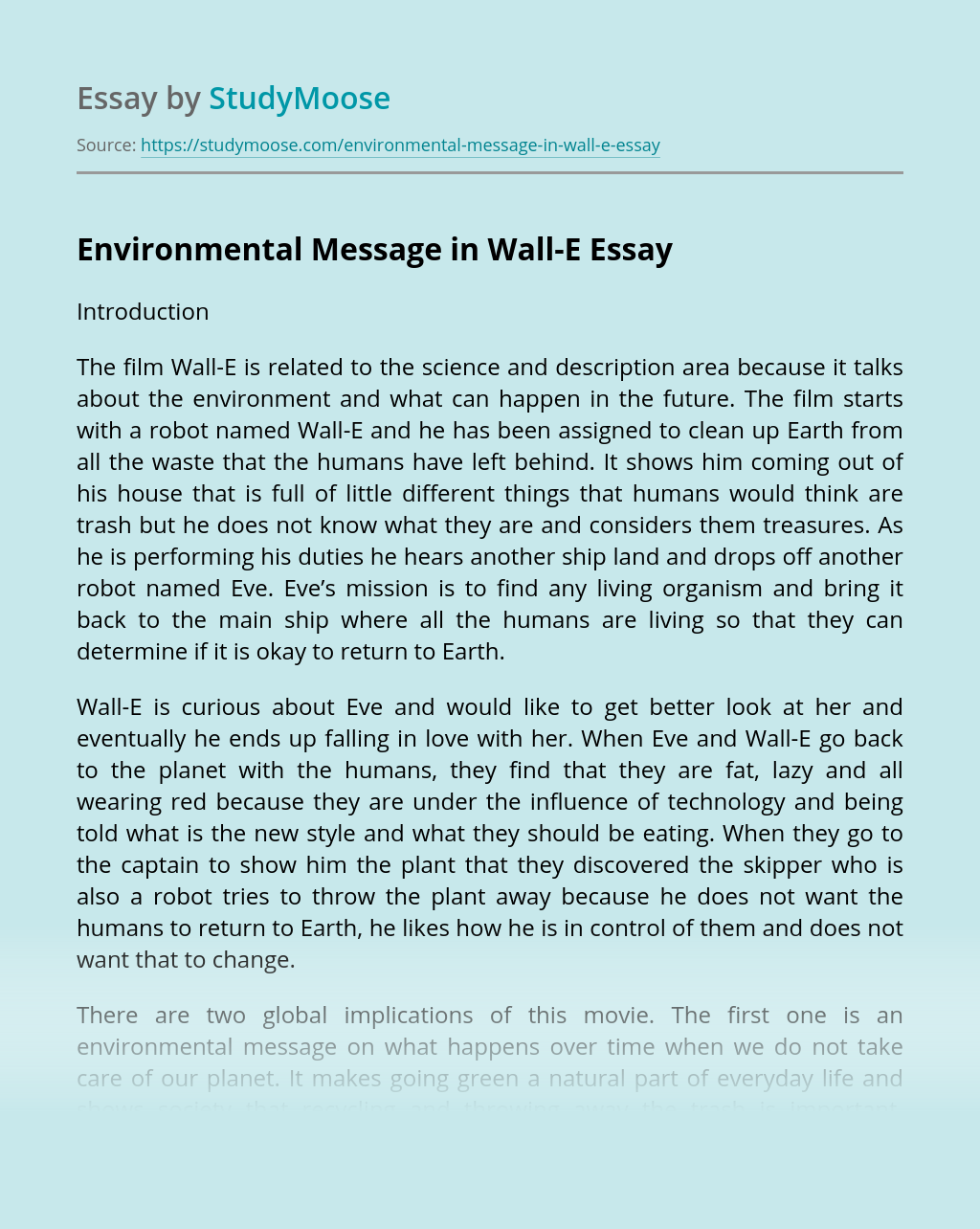 1. Executive summary Herman Miller, an environmental leader in the office furniture industry that offers a wide variety of products including seating, systems furniture, filing storage, desks, tables and health care. In 1989, the company decided to adopt a triple-bottom-line philosophy, so it established and changed company’s environmental direction by adopting “Perfect Vision” initiative that...

The city of my dreams is neither too big nor too small. (Jenna) It is clean, there aren’t any cigarette butts, chewing gums, papers or dog dirt on the floor.( Angélique /Marjorie) It is Green, ecological (Stéphanie): there are less traffic and pollution because people use alternative means of transport (Gamzé/ Maria) and the cars...

The responsibility of keeping our school clean belongs to all of us not just the custodial staff. To facilitate this we encourage for certain steps. Cleanliness of Grounds Students are requested to use the several garbage bins that are placed by the doors and the baseball diamonds to deposit their papers or uneaten food items....

Considering the effect of clinical and technological developments, the principle of waste to wealth is an ecological problem. 1. Environment Modification When processing the initial (virgin) material, the amount of energy used up in their extraction along with transportation usually involve burning fuels which sources of greenhouse gas emissions. Although production of products through recycling...

Illegal solid waste disposal on Willies Street in Bedford Town is being taking place. This garbage along the roadside is the root cause of creating several problems regarding people’s health and in maintaining the road for an undisturbed traffic. It’s been over a year that people commit the outrageous crime of throwing garbage along the...