There are a number of ways in which coasts are eroded:

In addition there are many forms of weathering

Rapid erosion occurs on rocks with weakness, which might develop into sea caves. If two sea caves meet, an arch is formed, and so on, until a stack and a stump are produced.

These features are largely determined by the location of the weakness in the rock, and variations in the wave energy caused by refraction on the headland. These are relatively small-scale features and, ob a regional scale, headlands and bays relate to differences in geological structure and resistance.

The profile of a cliff depends upon a number of factors including:

Rocks of low resistance are easily eroded and are unable to support an overhang.

Jointing may determine the location of weakness in the rock, just as the angle of dip may control the shape of the cliff. Past processes are also important. In areas affected by periglaciation, beveled cliffs are found.

Deposition occurs when the supply of sediment exceeds the rate of removal. This is especially common in sheltered, low energy environments. Features include barrier beaches, spits, bars and sand dunes. Beaches in mid and high latitudes are mostly pebble, whereas those in the tropics are mostly sand. This is due to the contribution of rivers as suppliers of sediment in the tropics.

Beach form is affected by the size, shape and composition of materials, tidal range, and wave characteristics. As storm waves are more frequent in winter and swell waves more important in summer, many beaches differ in their winter and summer profile. The relationship between wave steepness and beach angle is two-way: steep destructive waves reduce beach angle, whereas gentle constructive waves increase it. Low gradients produce shallow water which, in turn, increases wave steepness. Hence, plunging waves are associated with gentle beaches, whereas surging waves are associated with steeper beaches.

Sediment size affects beach profile through its percolation rate. Shingle and pebbles allow rapid infiltration and percolation hence the impact of swash and backwash will be reduced. As the backwash is reduced it will not impede the next swash. If the swash is stronger then the backwash then deposition may occur.Sand, in contrast, produces a lower angle and allows less percolation. Backwash is likely to be more important then on a gravel beach. The pattern is more complicated because sediment size varies higher up a beach. Largest particles, the products of cliff recession, are found at the rear of a beach. Large, rounded material on the upper beach is probably supplied only during the highest spring tides and is unaffected by ‘average’ conditions. On the lower beach, wave action is more frequent, attrition is common, and consequent particle size is smaller.

The source of material varies considerably and includes material eroded from cliffs and headlands. However, in Arctic areas solifluction is an important contributor. Globally, rivers contribute over 100 times more material then coastal erosion. In the British islands, for example, less then 5% of coastal sediments are from coastal erosion. Much of the material is periglacial in origin, moved in as a result of rising sea levels. As the sediment supply is therefore limited, many beaches are relict landforms.

Stopping erosion and deposition is not an easy thing to do as the force of nature is much stronger then any human force. This although does not stop man from trying as he might have come up with a few suggestions on how to decrease erosion which leads to a decrease in deposition. This may be done by hardening the type of rock being eroded; for example: the rock under erosion may be coated with concrete (which is a hard impermeable rock). This will result to the water slipping instead of eroding into the rock. It will also cause the deposition to decrease in a way since no more peaces of rock are present to be deposited, though fragments from the sea bed are still present. Another way to stop erosion is by causing less pressure on top of the cliff. This might be done by not building on top of it. The more pressure is done on top of the cliff the more chance of erosion there is at the bottom. 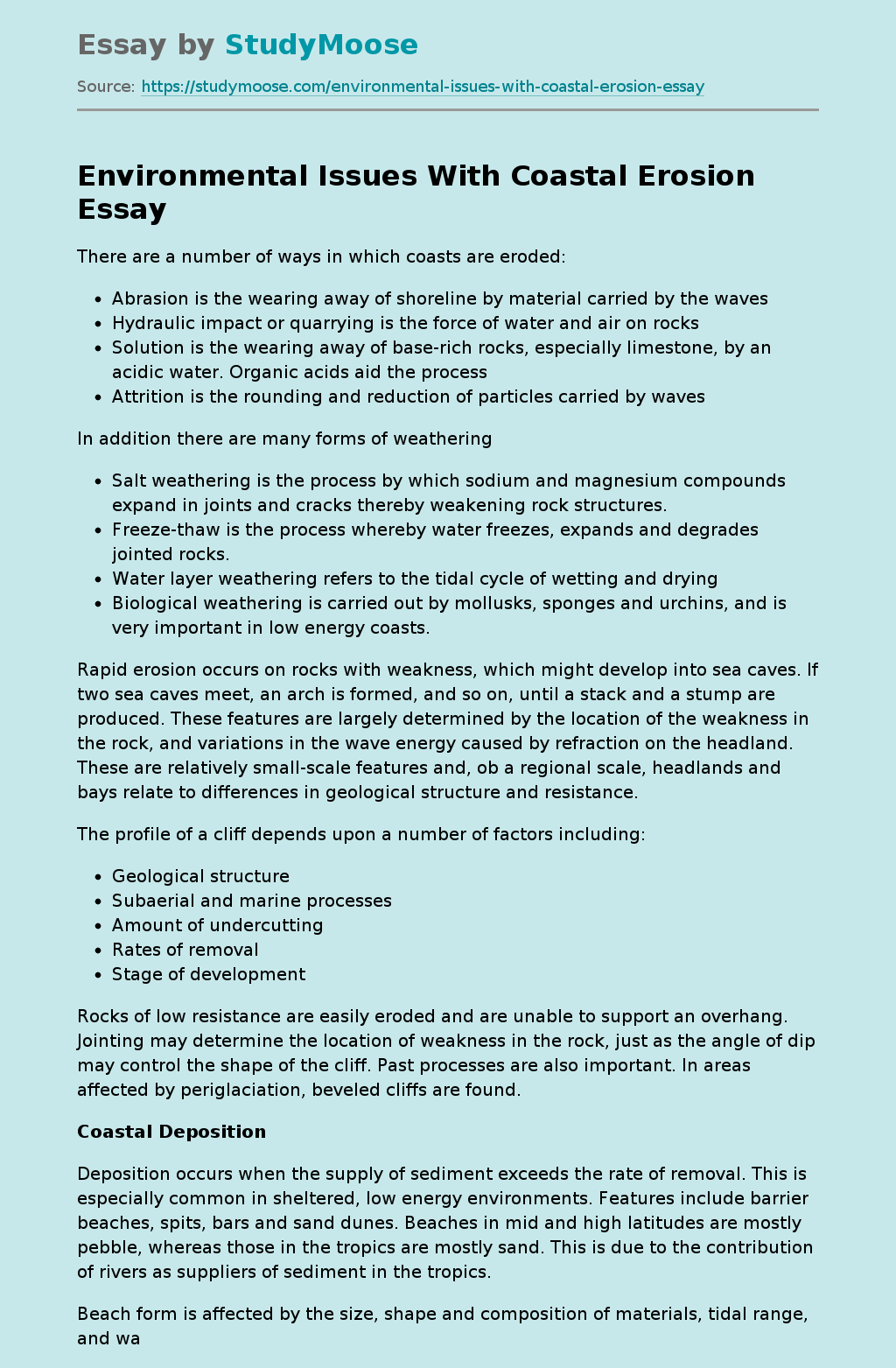