ENVIRONMENTAL IMPACT: TSUNAMITsunami is a series of water waves combines as they become huge waves as the depth of the ocean decreases. Therefore, as the waves get higher, the velocity exerted by the waves would increase so there are a lot of energy produced by these waves and this causes water flowing further from the shore and these water waves is enough to destruct the environment in many ways. The effects of a tsunami depending on the characteristics of the waves that generates and its magnitude of the tsunami.

Don't use plagiarized sources. Get your custom essay on
“ ENVIRONMENTAL IMPACT tsunami ”
Get custom paper
NEW! smart matching with writer

Figure 1: Building destruction caused by tsunamiOne of it is, extreme destruction of objects. One of the common example of objects is buildings and homes. This is because height of most tsunami would be around 3 meters which is high enough than most of the buildings and high velocity of the tsunami creates high kinetic energy and when the wave hits the building it destructs because there is not enough force by the buildings to oppose the energy created by the waves.

Based on statistics in 2011 when Japan got affected by tsunami, there were around one million buildings were destroyed resulting of tsunami. Other notable impacts of tsunami are destruction of telephone wires, trees getting damaged and damaging cars in which destructs the foundation of the shore are more than likely destroyed.Moreover, tsunamis also contaminates these soil and water. These is where water bodies such as groundwater, lakes, river and wells. have been affected by these tsunami What happens is that these wells, rivers and lakes are filled with saltwater and contaminated with these waste and unknown chemicals such as oil and what it causes is that these water could not be consumed by anyone.

Based on 2004 Tsunami in Nagapattinam district in Tamil Nadu, the groundwater salinity increases rapidly and it took more than a year for the salinity to return to normal. On the other hand, based on observation on these soil and waters, the electrical conductivity of the soil and water increases right after Tsunami because of the salt water polluting these soil as salt water containing Na+ and Cl- ions which is an electric conductor. Moreover, these poisoned soils also affects the agricultural sites in which crops and flora were damaged.Therefore, tsunami also causes affects human ecosystem. One of it is that it causes death to humans. This is because, the tsunami comes without any notice and it comes in a high speed waves and these water waves contains debris and wastes such as tree branches are enough to kill humans and some of humans are killed by getting smashed in buildings. Moreover, tsunami also causes disease and pollution. This is because polluted water and food supplies act as a risk to human’s health. These flood waters containing many sources of debris such as dirt therefore, infectious diseases such as malaria and cholera may become more common right after a tsunami. Besides that, these tsunamis also causes loss of homes and shelter and many individuals who live in an area hit by a tsunami would lose everything they own, which causes them homeless. This causes them to be exposed in any climate changes such as cold weather and hot weather and having no cover for themMoreover, tsunami also causes destruction of forest. Due to fast water waves of the tsunami, these trees were snapped, uprooted and undermined. Based on 2004 Indian ocean tsunami, natural forest were reduced by 8 percent due to these tsunami. Moreover, tree plays a vital role in trapping carbon dioxide for photosynthesis. With this trees being reduced, carbon dioxide would not be trapped and therefore increasing carbon dioxide content in earth and causing global warmingFigure 2: forest and plants affected by tsunamiNot only tsunami affects humans, it also affects marine life. How this affects is, these water waves mixed with dirt and debris and accumulates in the river or lake. What happens is that, the sunlight could not penetrate in the water causing the turbidity of the water to increase. When the turbidity increases the oxygen content in the water decreases because the aquatic plants are unable to perform photosynthesis and unable to release oxygen in water therefore killing these fish and marine ecosystem. Therefore, these toxins and chemicals from the land are pushed to the river or lake by the tsunami and it does disrupt the food chain of the marine ecosystem and end up killing themReferencesTsunamis: The effects. (n.d.). Retrieved from M. (2018, November 19). What is the Impact of a Tsunami and How does a Major Tsunami Impact the Environmental And Humans. Retrieved from Oceans 11. What is a tsunami? Tsunamis are defined as extremely large ocean waves triggered by underwater earthquakes, volcanic activities or. – ppt download. (n.d.). Retrieved from A. (n.d.). Geography AS Notes. Retrieved from L. (2017, July 02). What Is a Tsunami? Retrieved from Department of Commerce, & National Oceanic and Atmospheric Administration. (n.d.). NOAA’s National Ocean Service. Retrieved from 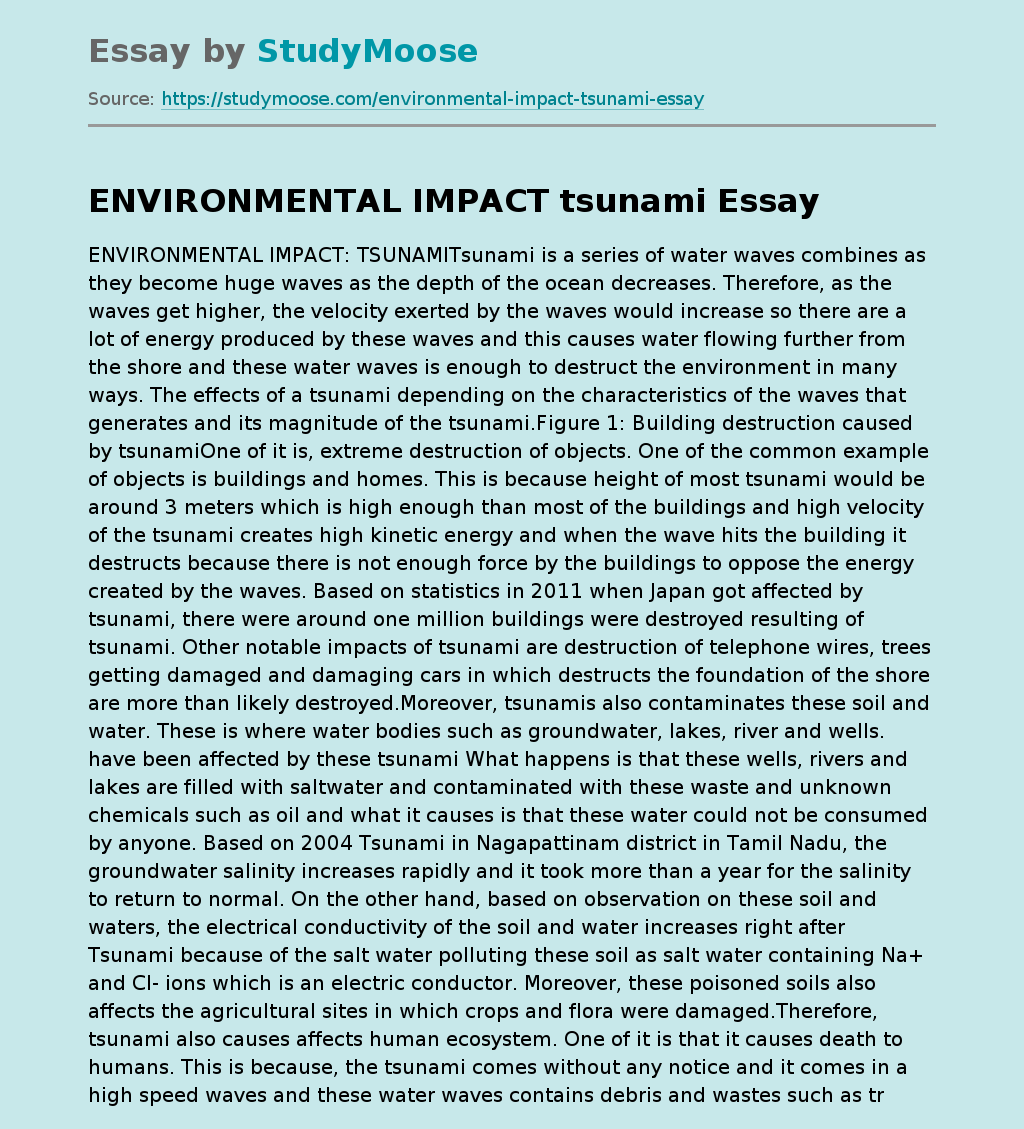