As an avenue of entertainment and communication, and as a research and reference tool, the internet has had a huge impact on the modern societies of developed nations. At the same time, there is concern that the disadvantages and negative influences may outweigh the benefits to the society. This essay argues that, in the last decade, the advantages of the internet far outweigh the disadvantages. This claim is addressed with the support of current authoritative sources which provide the framework for making such a claim.

Don't use plagiarized sources. Get your custom essay on
“ Entertainment and Communication ”
Get custom paper
NEW! smart matching with writer

This essay first explores the effect of the internet on the social structures of family life, and religious and spiritual practice. Subsequently, this essay examines the repercussions of the internet on national cultural identity and multiculturalism.

Firstly, in the last ten years, modern family life has been enhanced by developments in technology, and the internet is no exception. The advent of the internet affords parents the opportunity to use the World Wide Web to work from home, removing the need to place pre-school age children in day care centres in the care of strangers and so reinforcing the family unit (Jenkins 2010).

However, the benefits of the internet not only have implications for immediate family; members of the extended family can overcome the barriers of time or distance to remain close through such channels as email or social networking sites, for example Facebook.

Despite this, Fenech (2007) asserts that the internet has eroded some aspects of family life. Where previous generations may have forsaken dinner conversation in order to watch television together, the practical dimensions of a laptop screen now preclude this act of “togetherness” (p342).

Nevertheless, any avenue that generally allows more opportunity for contact between members of an immediate or extended family has to be seen as advantageous. Moreover, the internet allows a sense of inclusion that goes beyond the family sphere.

Secondly, due to the increasing accessibility of the internet in the last ten years, participating in a religion no longer necessarily depends on a person’s ability to attend a place of worship. The virtual ‘congregation’ may offer a person more opportunities of interaction with both the spiritual leader and other devotees by providing facilities such as blogs, chat rooms and video links. Moreover, this creates a sense of belonging to a religious or spiritual community where one may have not existed before, as more and more people commute, work longer hours and, indeed, are required to work on public holidays, which often coincide with religious festivals (Wong 2009).

Though Goldstein (2008) ascertains that the flagrant consumerism promoted through such mass media outlets as the internet is responsible for a turn away from religious practices and a rapid decline in religious service attendance, her research focuses solely on, Christianity, Judaism and Islam and is not inclusive of growing sects such as Jews For Jesus and alternative religions such as The Baha’i Faith. Groups such as these use the internet to unite their followers globally (Wong 2009).What is more, the internet is uniting people on a more personal and intimate level.

Thirdly, the internet offers the opportunity to maintain cultural ties with one’s country even when living abroad for work purposes. Expatriates can view electronic versions of newspapers, stream and download news, current affairs programmes and local dramas from their country of origin, so keeping in contact with the culture. It could be argued, as Azhad (2008) does, that this process could be facilitated just as easily by print media and DVD recordings being sent through the mail, as would have been the norm a decade ago. Nonetheless, it is the ‘live’ experience of being able to access news from home “as it happens” that reinforces a national’s ties to the home culture, and simulates a feeling of “being there” (Olsten 2008 p.6).

This connectedness to home alleviates feelings an expatriate might have of dislocation or alienation from their countrymen, as ‘real time’ exposure to the home vernacular creates common reference points, making communication a much smoother process (Wong 2009). Equally, other facilities afforded by the internet, such as Skype, enable someone away from home to still have a presence in the home country as they participate in the celebration of cultural festivals and national holidays, thus reinforcing their commitment to nationalism in the eyes of their compatriots and tightening the ties that bind. Alternatively, just as the internet serves to strengthen national identity, it can also provide a point of reference for those who live in a multicultural context.

Finally, in a globalised world, the last ten years have seen the internet augment a multicultural society by creating a venue to air diverse cultural opinions and to construct diverse cultural identities. Mainstream newspapers, radio and current affairs programmes are representative of a perceived norm and do not reflect the complexity of a multicultural society. In turn, ethnocentric or non-mainstream media reach a narrowly targeted audience and serve to further ghettoize “the other” (Zadrow 2010 p.11). The internet thus provides the opportunity for any voice to be heard alongside and equally with all other voices in the country, community, or indeed, the world.

In this way the internet equips the global citizen with a fluidity they can use to exist and interact both globally and locally, rather than being confined to a fixed and marginalised identity. Notwithstanding the fact that the internet is English based and broadly advocates a western lifestyle, this does not necessarily mean it must lead to a homogenized world. Citing the research of Kennard, Zadrow (2010) maintains that the internet acts as an interactive archive from which an individual can draw all the elements to both create and, more importantly, preserve cultural identity.

In conclusion, this essay explored the effect of the internet on people’s lives in the last decade and found that the advantages of the internet far overshadow the disadvantages. It found the internet has had positive effects on family life, allowing the hands on parenting of pre-school children by those parents who are able to use the internet to work from home. In addition, it has reinforced the extended family by harnessing email and social networking sites as a means to stay in direct contact. Furthermore, blogs, chat rooms and video links have offered an alternative to attendance at religious services, which have suffered such rapid decline in recent times.

Another positive effect of the internet is its ability to re-assert national identity, particularly for those living abroad, as they retain remote access to the home culture by being able to download or stream current affairs or local drama. Finally, the internet enhances multiculturalism by offering an alternative to mainstream media representations of the norm to those who identify as ‘the other’. Arguments which support the negative impact of the internet on people’s lives in the 21st century focus on very narrow aspects and fail to acknowledge the broad range of benefits the internet has borne on contemporary society.

Goldstein, R 2008, ‘The last person to leave heaven: a study of the impact of new millennium consumerism on traditional religious practices’, Journal of Critical and Cultural Research, vol.2, no.3, pp. 9-18, viewed 30 October 2011. http://www.prb.australasia.com/content/documents/JCCR%23.pdf

Wong, Z 2009, ‘Why kneel when you can click!’ paper presented to the 7th International Conference on Digital Religion, Southern Cross University. Lismore, NSW, 28 to 31 July.

Zadrow, K 2010, The well in the mirror: theories of subjectivity in the digital age, Elliott McGill Ltd, viewed 28 July 2011, via Ovid eBooks. 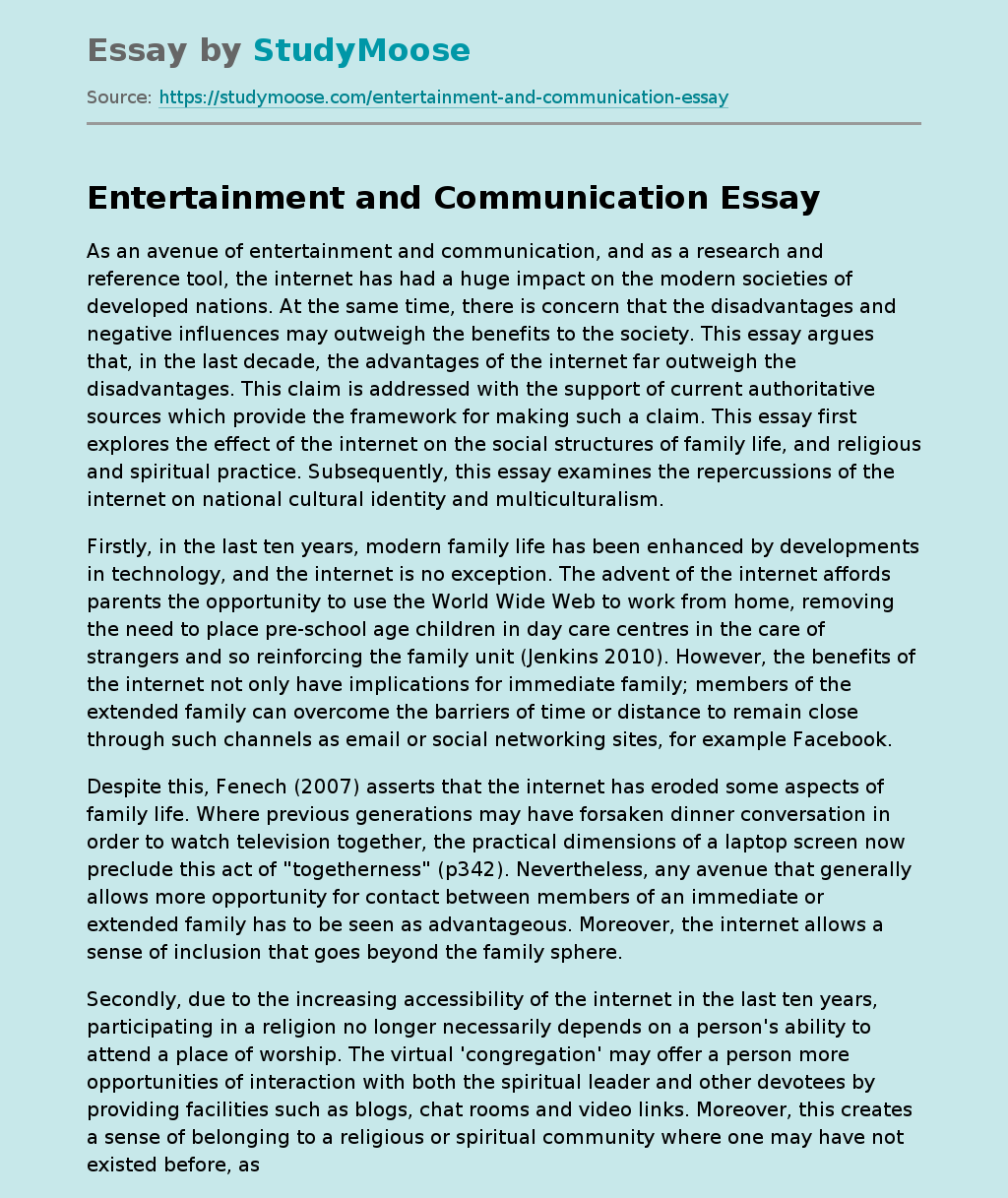