Analyzing the fall of two Giants

This case results in the publishing of Sarbanes-Oxley Act of 2002 and relevant to the Securities and Exchange Commission. Also, it is related to SAS 103:

[1] What were the business risk Enron faced, and how did those risks increase the likelihood if material misstatements in Enron’s financial statements?

The business risks Enron faced are as following:

The complex business model used in Enron lead overstate its revenue while not disclose the exact value of debt.

Don't use plagiarized sources. Get your custom essay on
“ Enron Corporation and Anderson case study ”
Get custom paper
NEW! smart matching with writer

Numbers of special purpose entities are used to keep debt off the books. The untraditional ventures incense the business expansion rapidly and risky. Also, the limitation of GAAP makes it possible that management took advantages of complex standards to hide the actual economic substance. All of these above increase the likelihood of material misstatements in Enron’s financial statements.

The fall of Enron could have been prevented by the board of directors.

The board should responsible for the company’s financial reports. However, they are failed to disclose the off books liabilities to the public, which led the Enron fall. What is more, the board and the audit committee do not question any of the high risk transactions. They should have known about the risks and apparent lack of independence with Enron’s SPEs. They should recognize that the high risk transactions with SPE will have huge effects on Enron. Meanwhile, they should ask SPE to disclosure financials properly.

If an auditor provide management consulting services for his audit client, he is just audit what he have done, which ,I think, is meaningless. On the contrary, some people may agree that auditors should be allowed to perform their services for the same client. First, choosing one firm to do all of these services can save a great deal of money. Second, the auditors will much more familiar with the client’s business and its industry, which make their work efficient.

Its stocks experience a sharp slump. Meanwhile, Standard & Poor’s re-classify Enron’s stocks as junk bonds, making almost every stockholder feel unsafe. The price drops to $0.26 per share in couple of days. Even worse, debts holders begin to call the loans because of the diminished stock price, which lead the collapse of Enron directly. Andersen experiences a similar situation. The damaged reputation of Andersen results in losing many top clients and partnerships oversea. 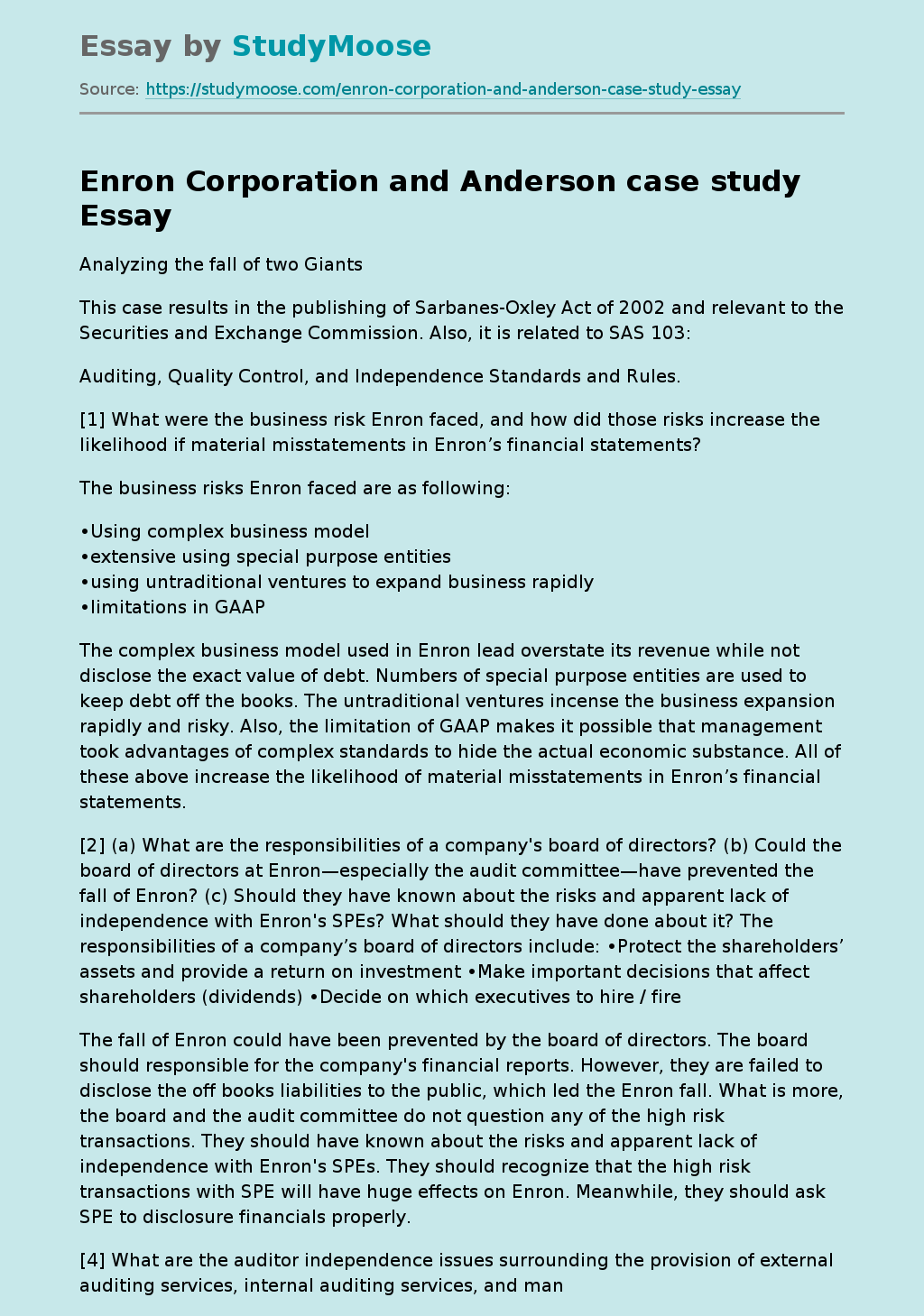