Accounting scandals are political or business scandals which arise with the disclosure of financial misdeeds by trusted executives of corporations or governments. These days, not too often, these scandals are splashed as headlines across media. Why? Because there are complex groups of stakeholders who might be seriously affected by the scandals. Enron scam was the most remarkable scandal in 20 centuries by their institutionalized, systematic, and creatively planned accounting fraud. The scandal also brought into question the accounting practices and activities of many corporations in the United States.

Don't use plagiarized sources. Get your custom essay on
“ Enron Business Scandal ”
Get custom paper
NEW! smart matching with writer

The scandal also affected the greater business world by causing the dissolution of the Arthur Andersen accounting company. This report will reveal the whole story of Enron scam and auditors role from the situation in more depth. It will also include the current situation of those responsible for the fraud. 2. Background of U. S in 1990s The 1990s of U. S were a time of prosperity and this prosperity period is originated from growth in IT corporates and in accordance with increase in productivity as technology develops with IT.

In the mid- to late-90s, society’s expectations of what the Internet could offer were unrealistic.

Many investors foolishly ignored the fundamental rules of investing in the stock market and instead, investors and entrepreneurs became preoccupied with new ideas that were not yet proven to have market potential. Furthermore, they ignored the blatant signs that the bubble was about to burst. (IT Bubble in 90s) There are two main reasons for the bubble; with investors` optimistic expectation, there were a lot of ‘Window dressing’ in accounting.

As Enron collapsed, the growth of the tech sector proved to be illusory, and bubble started to sober. 3. Enron- who are they?

Enron Corporation is an energy trading, communications company which was formed in 1985 based in Houston, Texas. Enron marketed electricity and natural gas, delivered energy and other physical commodities. Company branched into many non-energy-related fields as well, including such areas as high-speed Internet bandwidth, and financial and risk management with 21,000 employees at mid-2001. The company reported revenues of $101 billion in 2000. It has stakes in nearly 30,000 miles of gas pipeline, owns or has access to a 15,000mile fiber optic network and has a stake in electricity generating operations around the world. 4.

Enron- what they did? The Enron fraud case is extremely complex. There are several main characters who are spearheading the Enron scam. One of them was Jeff Skillng. Jeff Skillng, who was a consultant in Mckinsey, took charge in consulting Enron. He found problems and also potentiality of Enron and he proposed the idea of “gas bank” to Enron, which is a system that is combining financial system and gas supply and demand system, and taking the margin from the two system(as bank does). This was an ideal idea in theory and Enron asked him to take charge for this business, and later he became the president of Enron’s trading operations.

Also, he convinced federal regulators to permit Enron to use an accounting method known as “mark to market. ” Using this method allowed Enron to count projected earnings from long-term energy contracts as current income. This was money that might not be collected for many years. It is thought that this technique was used to inflate revenue numbers by manipulating projections for future revenue. The problem is that it doesn`t match realised profit and real cash flow. especially, Enron`s main trading was long term future contract which is hard to make valuation for the future.

Use of these techniques made it difficult to see how Enron was really making money. The numbers were on the books so the stock prices remained high, but Enron wasn’t paying high taxes. When the telecom industry suffered its first downturn, Enron suffered as well. Eventually, the house of cards began falling. When Enron’s stock began to decline, the Raptors began to decline as well. On August 14, 2001, Enron’s CEO, Jeff Skilling, resigned due to “family issues. ” Enron chairman Ken Lay stepped in as CEO. 5. One example of fraud

Enron`s “too much Off-Balance Sheet Transactions” Enron used “off-balance-sheet”technique for anytime, for many purposes, because it would enable Enron to present itself more attractively as measured by the ratios favored by analysts and investors. Skillng used securitisation to supply more liquidity and also to clean up the assets that is hardly generating income from it. He also hided most of the debt by securitisation. So, Enron needed Special purpose entities(SPE) for the securitization purpose. JEDI was one of the SPE. California PERS and Enron invested by $25000m each.

As soon as the JEDI established, Enron started to sell energy related stock to JEDI and it grew JEDI by 23% per year on average. It made Skillng`s ECT business bigger and bigger. 6. Consequences for the stakeholders The key stakeholders affected by the collapse of Enron were its employees and retirees. Stakeholders and mutual funds investors lost $ 70billion market value. Banks were also affected by the meltdown of the company. Not only the stakeholder and bondholder lose out, the confidence in the company also fell. This was the major setback for the company.

The actions of Enron management left a deep scare for its 4000 employees which lost out their jobs and also impacted others around them. Some blamed Arthur Andersen; Enron’s accounting firm and some blame the board of directors for insufficient oversights. The damage was so big that it was likely to take years for the court to sort the wreckage. The company did not think of its future and took many bad steps just to earn money. The CEO should have looked into the company matters long time ago and took action so that hundreds of jobs could have been saved.

The companies who were associated with the big firm were affected on a very large scale. This was the biggest bankruptcy of a firm with $63. 4 billion in assets. 7. Auditors in this scandal, and their role The external auditing body of Enron company was Arthur Anderson LLP, formerly one of the ‘big 5’ accounting firms, providing auditing, tax, and consulting services to large corporations. Andersen definitely Knew Enron Was in Trouble but they overlooked at it and even conspired with Enron to manipulate the financial statements. They knew Enron was in trouble as early as Feb. 2001, a company memo showed, and Andersen debated dropping the collapsed energy firm all together, Reuters reported. Additionally, Andersen knew in mid-August of a senior Enron employee’s concerns about improprieties in the energy company’s accounting practices. Andersen confirmed that a memo dated Feb. 6 recounted a meeting between Andersen executives about whether Andersen should retain the now-bankrupt Enron as a client. Auditors are responsible directly under the law especially the international standards to report directly to the shareholders on the status of the company’s or a bank’s account at a particular point in time.

They heavily misconducted as auditors as they received money and hided about Enron`s truth. 8. Ramifications It is not easy to implement rigorous standards without changing Incentives. This situation can be seen in South East Asian countries like: Singapore, Thailand, Hong Kong, China. Each country can implement its own accounting standards, but did not implement the substantial institutional changes required to make these standards effective. According to various studies conducted in this area, new standards did not result in better-quality financial reporting.9. Conclusion: In search of better standards and ethics The ENRON Scandal is considered to be one of the most notorious within American history; an unofficial blueprint for a case study on White Collar crime. Enron’s behaviour has confirmed that the treatment of off-balance-sheet dodge, American accounting standards are too lax. It is time for another effort to realign the system to function more in shareholders’ interests. Companies need stronger non-executive directors, paid enough to devote proper attention to the job. 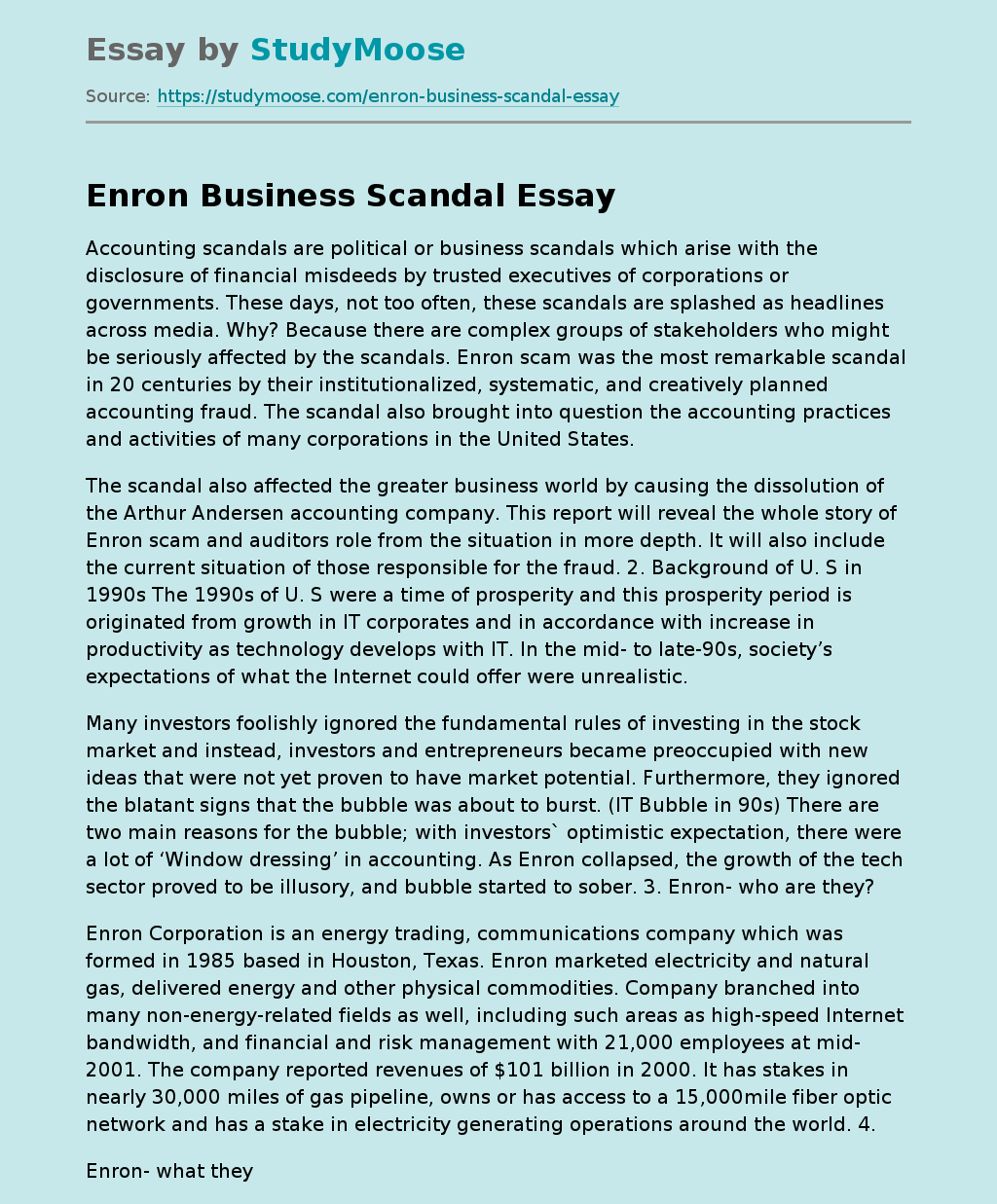