English power in literature or the Lord of the Rings

The film I decided to choose calls The Lord of the Rings: The Fellowship of the Ring. The movie is based on a book written by a very famous writer J.R.R. Tolkien; the director of the film is Peter Jackson; it takes place in the Middle Earth. This is a place where all sorts of creatures such as Hobbits, Elves, Humans, Dwarves, Orcs, and Wizards live. The place where the movie was filmed is New Zeeland. To be honest – they showed all the views and beauty of the country in the best way.

Don't use plagiarized sources. Get your custom essay on
“ English power in literature or the Lord of the Rings ”
Get custom paper
NEW! smart matching with writer

By the way, didn’t you ask a question, how crew members filmed and gathered together such a huge quantity of people? Are you with superpowers or what? But anyway, let’s continue.

The way actors play, and the crew members work is crazy, but there are some interesting moments which, probably, have to be mentioned. As common person knows – everything has two sides of the same coin.

In the film, we see Frodo and Sam, whose relationships are strange; really hard to explain what exactly is weird but it is frequently uncomfortable to watch from time to time. You could probably see whenever Frodo and Sam are alone, the first one stares into the camera, with misty eyes and whispers the words “Oh, Sam…”. Also, it is curiously to realize that the main hero of the film is Frodo, while it is Sam who always carries Frodo on his back, and helps him survive, fights with evil and protects him, when Frodo is simply standing, hiding and starring.

But we can contrast and sum up this idea with the next: we are nothing without friendship. True friends, who like Sam will help and won’t live in each situation, are as good as gold. Sam knew that Frodo is the only one who can carry the ring, who have the strength to withstand its power.

Also, this story teaches people to be strong. Of course, Frodo wasn’t happy of Bilbo Baggins ‘gift’, he didn’t know that the ring was not common. But he understood that if even Gandalf can’t deal with the ring, he must help his friends, and home fields to survive. Frodo heard all that awful and scary things the Dark Lord whispered, continuing to carry the ring, and feeling the power of the ring. He was strong; we can easily see that each character of the film has courage. Sometimes it can be hard to say who is a real main hero. It is Gandalf; imagine what could happen, without his wisdom and powers. Middle Earth would become a ruin, for sure. What about Eowyn? She was the only one who could defeat the Witch-King in battle. There are many characters which you could choose, but they all have one similar thing: courage; the film is full of didactic.

By the way, hospitality is an interesting topic here too. Heroes realize that everyone who travels needs to have a place where they can take a break from the world, each episode where we see a castle, and its King, we understand that a next scene will be a tableful. This is cute; hospitality is not only a virtue but an inherent part of Tolkien’s Middle Earth.

Moreover, the spirit of Hope gets into our souls as fast as in the ones of the heroes. Each scene, each episode is full of it. Even in the hardest moments, we feel the hope of the heroes; we hear the music which was picked up for this reason and feel all that emotions. We are in this film; the mission accomplished.

Scriptwriters skillfully play with our feelings. They put in film pretty heavy moments like the suffering of good people, but again – a coin. It doesn’t matter how deep will you fall – you can be forgiven. You know, after watching such a good film you don’t care that sometimes dialogues were obvious, or situations were strange and odd, you just watch and feel.

Summing it up, I can say that there a lot of films which are needed to be watched because of their views, pictures and etc. But there are such films as Lord of the Ring, which needs to be seen by heart and soul.

English power in literature or the Lord of the Rings. (2018, Feb 12). Retrieved from https://studymoose.com/english-power-literature-lord-rings-essay 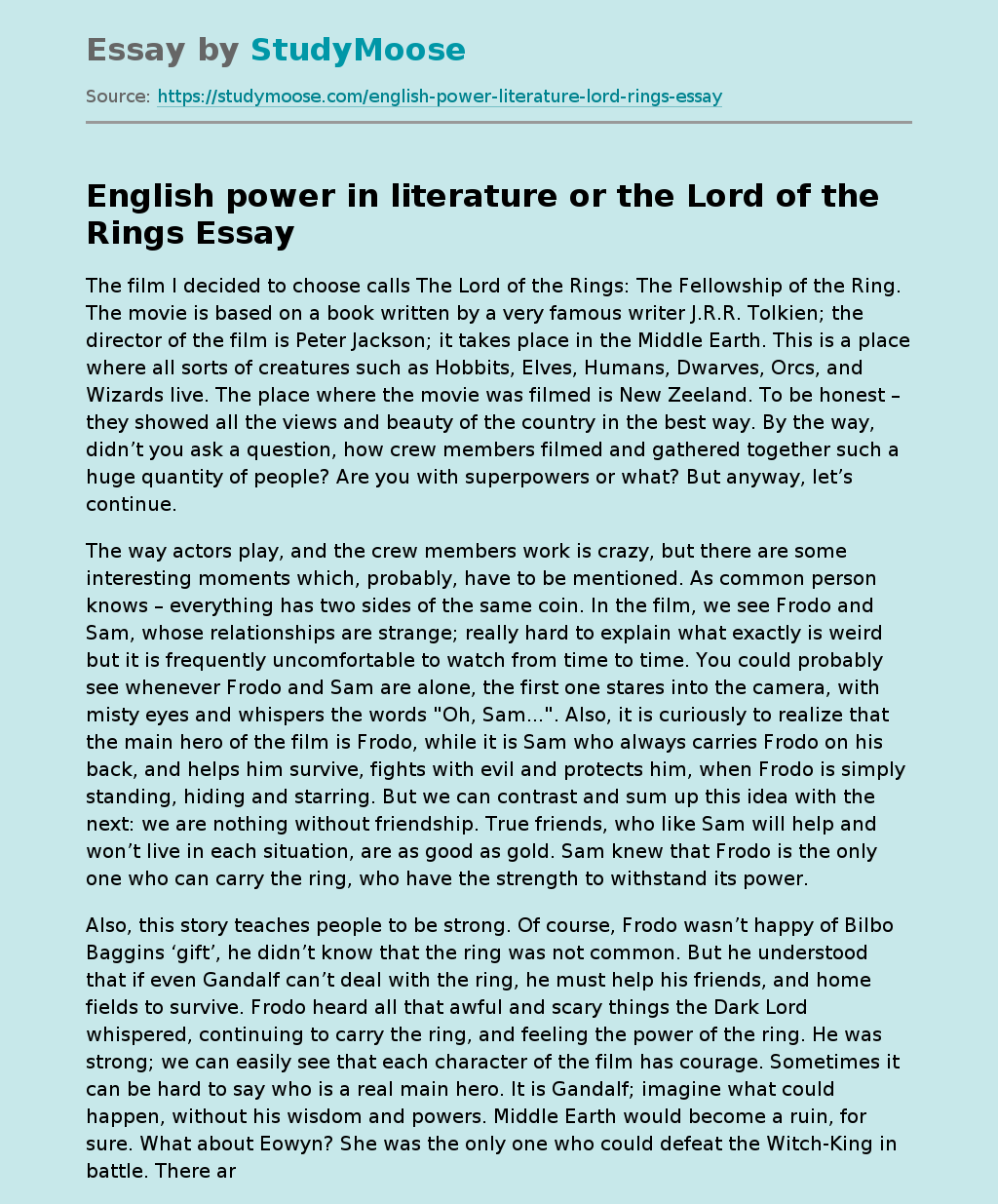