Language is a social-cultural-geographical phenomenon. There is a deep relationship between language, culture and society. When we study a language, we have to study its dialects, register, slang, taboo, idiolects, etc. We can find the role of language and culture in The Parent Trap movie. The movie tells us about the differences culture of 2 girls who live in London and California. They were separated when they are baby. It was because their parents divorce. One of the differences is on the way they speak and pronounce the words.

Don't use plagiarized sources. Get your custom essay on
“ English Language and British English ”
Get custom paper
NEW! smart matching with writer

There are some different vocabularies of American English and British English, but actually they have the same meaning.

That’s way, if we learn a language, we have to learn the culture too, in order we can understand the meaning of certain expression or what they mean. There are some different expressions of American English and British English I found in The Parent Trap movie. It is based on word variation ( pronunciation, grammar, accent, spelling, and lexis and idioms ).

They are some different expressions which i found in the movie. Split up – divorce, mum – mother, dad – father, totally – completely, I gave you a fright – you scared me, doin – doing, talking- talkin, daughter (ˈdɔːtə(r) in British English and ˈdɔːtər in American English), you gave me a fright – you scared me, oh my god ( /ɡɑd/ in American English and /ɡɒd/ in British english ).

It stars Dennis Quaid and Natasha Richardson as a couple who divorce soon after marrying, and Lindsay Lohan in a dual role as their twin daughters. This movie is very interesting, because there are some events that make us want to know more about the movie. First thing that we can learn from the movie is the differences between American English and British English.

There are the analysis of The Parent Trap movie

1. Divorce vs Split up

The first different expression that I found is divorce. Annie prefer said divorce to mean when a marriage is ended by an official or legal process. It means British English uses divorce to means that. But American English prefer uses split up to divorce. You can see in the movie. Annie said ‘ …. but my parents divorced years ago’. And Hallie said ‘ …. she and my Dad split up when I was baby ‘. Those different expressions have the same meaning. They mean their parents were separated a years ago. 2. Mum vs Mom

The second analysis is the different word they use as mom and mum. a mummy. a mum is related to mummy. A mom is related to mother. mom is a famous word but in America they call their mother “mom”. The O and U are what’s causing all this mess. So, the spelling is different. But the meaning is the same. You can see in the movie. Annie as using British English often say mum rather than mom as in her expression ‘ You’ve never seen your Mum’. But Hallie says Mom to mean a female parent as in her expression ‘ This. It’s a picture of my mom’.

It is also occured in the words recognise vs recognize. The meaning is the same to show approval or appreciation of. But the problem is in the spelling in –ise and -ize. As I told you before. For the word recognise, it is used in British English. Because American English often uses a -z.

Actually talkin and talking are the same. The difference is in the spelling. British English prefer uses talking to talkin. The meaning is the same to articulate (words). This word is include register too. Register is a variety of language defined according to its use in a social situation. Talkin include formal technical.

It also happens in the word doin and doing. The problem is the same. The difference in the spelling. The meaning is still same to perform or execute. American say that because of the habbit. They say doin very much without thinking. Doing is likely more formal than doing.

The definition of god is A being conceived as the perfect, omnipotent, omniscient originator and ruler of the universe, the principal object of faith and worship in monotheistic religions. The same thing happens in the expressions ‘oh, my god’. American english prefer say god with {/ɡɑd/ } to mean that. But British english says {/ɡɒd/} rather than {/ɡɑd/}. Now, you can choose whether you like to say god {/ɡɑd/ } or god {/ɡɒd/}. You can suit it with your environment. If your environment uses American English very much, you can use god {/ɡɑd/ }.

10. You gave me a fright vs you scared me

The conclusion is it doesn’t matter to use those different expressions as long as suitable with your environment. Actually, the meaning of those expressions are the same. 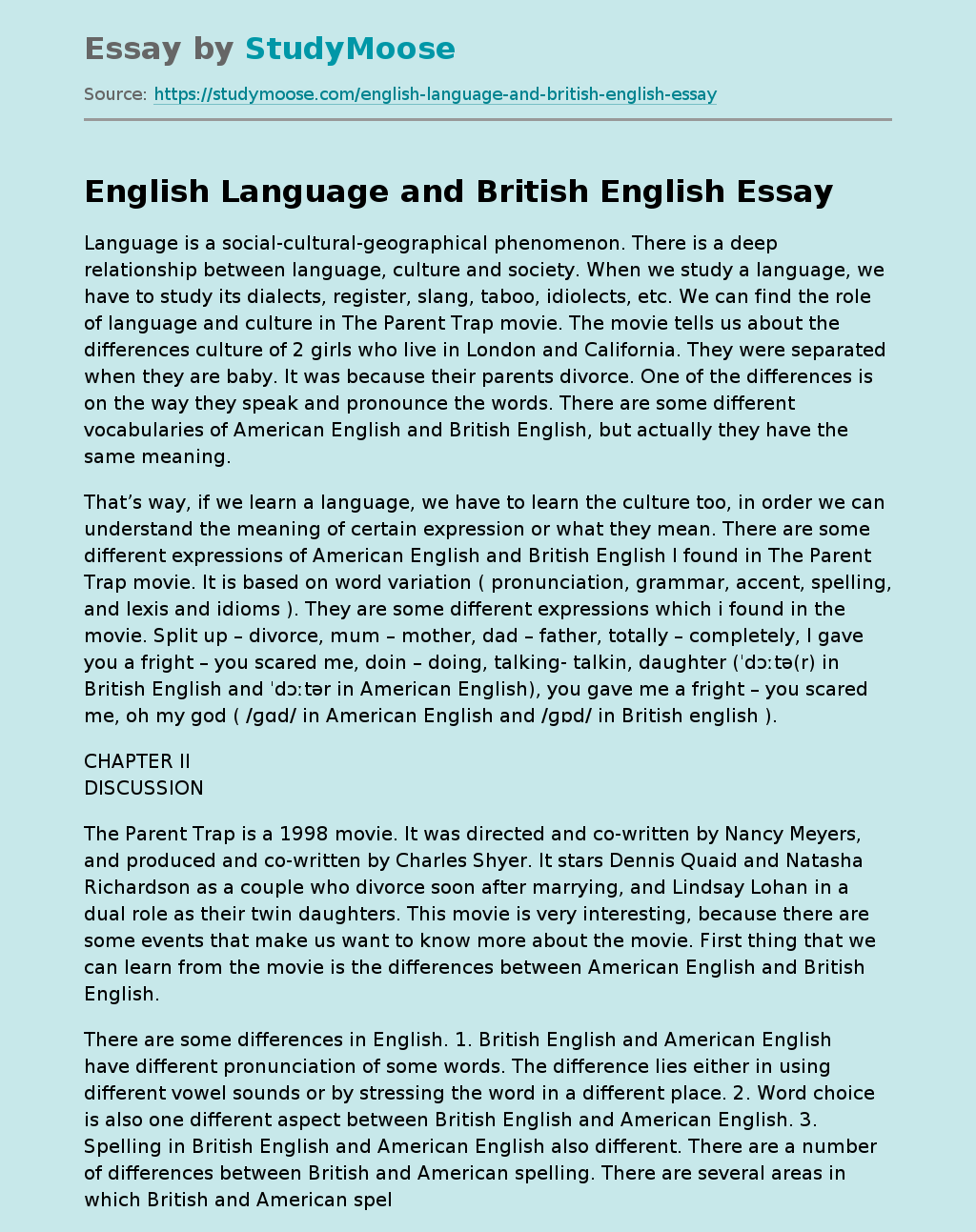