Research project comparing the level and set up of English Cricket to Australian Cricket. Why is Australia better at cricket than England, the country that invented the game? With the 2002 Ashes series being a walk over for Australia and retaining their world champions title with ease in the ICC world cup in South Africa I am going to investigate the factors that make Australia such a strong team on the cricket world stage. Will the next ashes series be yet another victory to Australia and will they remain the dominant team in the 2003 cricket season.

Don't use plagiarized sources. Get your custom essay on
“ English Cricket to Australian Cricket ”
Get custom paper
NEW! smart matching with writer

I am very interested in this topic as I enjoy participating and following the game of cricket. I watch a lot of cricket at different levels. When you look at the Australian and England teams the names of the players are all well-known figures in the sport and are all very talented. When the Ashes come round I think of what it would be like to win it, as I was only 3 when England won against Australia in the ashes back in 1986/7.

The scorecard after an encounter with these two teams amazes me to find out how England have been hammered by the aussies once again.

Why is Australia so good at cricket? This project is a research project and the topic ties in well with part of the specification, unit1 section A4 about Professional (Elite) sport and unit 4 Global Trends in International Sport. I have used my knowledge and lots or research on this area to broaden my knowledge.

Cricket is one of the oldest games in England. Through the British Empire the game of cricket spread.

All of the ICC full members today were once British colonies and were introduced to the game through the missionaries and military, Australia was one of these colonies. The set up of county cricket originated from a single match between Middlesex and Essex on the 31st of May 1787 where the first rules were written on the size of the pitch and how the game is played, these rules have been adapted but are still abided by today. A national team was set up and was arranged to take a tour to Australia on one of these early tours the ashes was born.

In 1882 when England went on tour in Australia playing a number of matches, on the 28th of August a match began at the oval. Australia had already won 4 out of the seven matches that had already been played. England were determined not to loose this game as them would be a laughing stock to the fans. The Australians batted first and were all out for 63 runs, England replied with an innings of only 101 which meant the game still had not been won, the Australians went out and gave a good battle but only managed to score another small total of 122 runs which meant that England only had to score 85 runs to bring about a long awaited victory, at one stage in the match the visitors were on 4 for 65 this gave them a comfortable position and they thought that the game was in the bag. Fred Spofforth came on to bowl and ripped the remaining English line up to shreds. England were all out for 101 runs just 8 runs short of victory.

Every one could not believe what had happened England were the laughing stock of the Australians. In the Sporting Times newspaper the next day posted the below obituary to English cricket. In Affectionate Rememberance of English Cricket Which Died At The Oval on 29th August 1882 Deeply lamented by a large circle of sorrowing friends and acquaintances R.I.P NB: The body will be cremated, and the ashes taken to Australia. This was the beginning of the ashes series.

From that day the ashes series has been the highlight of the cricket calender, the bi-annual series alternates between Australia and England with five tests being played at different venues. The trophy of the series is a small urn that contains the ashes of the bails that were burnt back in Australia in 1882, a replica is presented to the victorious team at the tournament but the original can be found in the museum of cricket at Lords. To date England held the ashes for 50 series but Australia have held the ashes for 71 years. The 2002 ashes series followed a similar pattern to that of the original games England suffered a humiliating defeat. 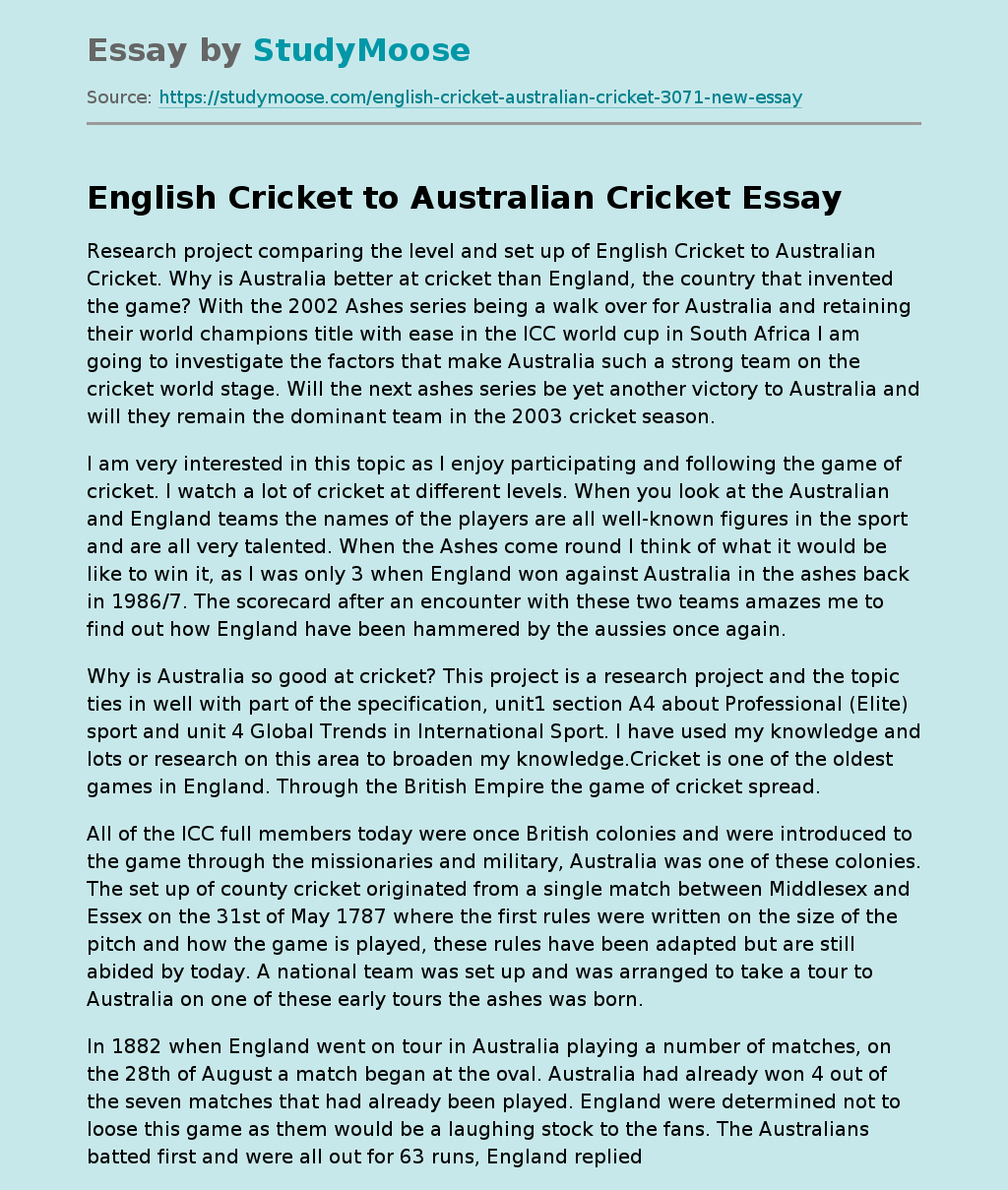